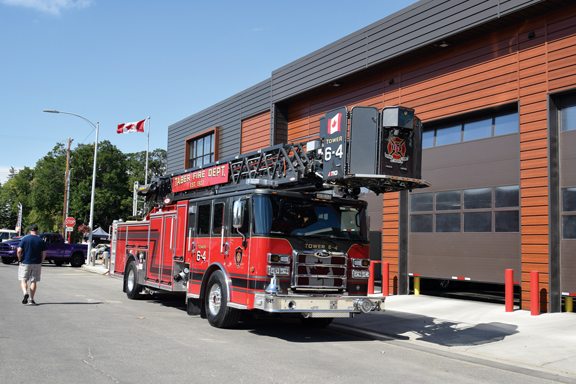 The Taber Fire Department moved into its William Ferguson Emergency Services Building on 49th Avenue in early summer, and members and staff have been settling in to the new facility in 2020.

“The transition took place on June 9 this year, which immensely changed our process and response, and getting people to and from the hall,” said Chief Steve Munshaw. “When we’re coming back and forth to the hall, we have all our people living in the residential portions of the community, which are west, centre and south. When you had the old hall on the far side over on the east, that changed everyone’s driving components. So now getting to this location we have quicker response times out, supporting the ambulance and the downtown core.”

One of the key motivators for the construction project and re-locating from the previous fire hall near Highway 36 was the elimination of response time considerations in relation to provincial fire regulations. Since the move in, Munshaw said the department’s neighbours haven’t reported undue impacts.

“One of the components there was how are our neighbours, how is the community reacting? We went around to our neighbours, and after a month, they didn’t realize we had moved in yet and we’ve done over 200 combined ambulance and fire calls out of the building…so between the combined response out of the halls being excellent, and being really well supported by the firefighters, we’re still pulling stats. It’s going to take six months to a year to get the true, what it will look like with what the response times are. We’ve been able to eliminate the fire risk standard, or HIRF (High Intensity Residential Fires), has been completely eliminated for our community. So the entire community is within a 10 minute response for structure fires.”

Slated for re-paving by the Town of Taber, the Legion’s former parking lot across the street is currently on hold. Munshaw indicated the east portion of the lot is available for public parking, while the west is restricted for staff and members only.

The department is preparing for the resumption of training classes being offered at the town’s fire training facility in the industrial area.

“We’ve been busy. In two weeks we’re hosting an NFPA 1033 course, which is fire investigation,” said Munshaw. “This course is hosted usually two to three times a year in this portion of Alberta, and we’re going to host one this fall and one in the spring. COVID has really changed the amount of distancing — when we teach a course, get involved in a course, there’s really not a lot of social distancing happening with the firefighters, because you’ve having to get fully dressed or you’re right beside each other. So we’re just now getting back into where we can run courses again, and what that means, and some the precautions we need to take. So this will be the first course we’ve held out there.”
There is still a final phase of construction planned for the training facility at a future date which will incorporate confined space and more high angle aspects.
“We’re still waiting for more development to occur out in that area, hopefully occurring over the next couple years,” said Munshaw.

Call volume has been on pace with previous years.

“We’re on the same pace as last year. I think it was a nine per cent increase in calls,” said Captain Steve Swarbrick, fire prevention officer. “We’ve had basically the same variety of calls, that hasn’t changed, and the activity level is about the same. We haven’t been shooting out for some of the mutual aid…but our call volume here is steady and we’re still operating around 300 per year.”

Early on during the COVID-19 lockdown period in Taber, department vehicles were a familiar sight on municipal roads doing multiple birthday drive-bys.

“It actually started as an idea from Vulcan County, they were the ones who highlighted it and got our attention, and so we thought what better way to help out the community and bring some awareness to people that are having a special day that can’t have a big gathering that they’re used to,” continued Swarbrick. “It just took off, we had almost a 1,000 years of birthdays celebrated. That was all done by our members as volunteers — none of that was paid-for activities by anyone — and there was a ton. We were out lots, and we actually got really positive feedback on it, and from people that weren’t involved.”

The department is gearing up for another recruitment drive, and is hoping to bring in some interested new members who would like to try their hand at volunteer (paid on-call) firefighting.

“We’re hoping to see our numbers sitting again back into that 40 category,” said Munshaw. “Right now we’re at that 34-35 mark. Every year we have people leave for jobs, for family, or just other volunteerism, but we’ve been very successful in keeping in that mid-30 range since I’ve come (to the service).”

COVID-19 brought some initial concerns outside the realm of viral infection, but the department didn’t see an uptick in call volumes.

“I would say no,” said Swarbrick. “We did have concerns when COVID first came in that some of the restrictions were keeping people at home a little more, that there might be more cooking fires, but we really didn’t see an increase.”

Munshaw finished by highlighting the public-private partnerships that were incorporated into the new building, and how this has generated great interest among other departments and municipalities looking to cut down on costs.

“2020 really saw us getting into this building, but also getting into this partnership with the federal government in Canada Post, provincial government in AHS, the municipality, being Taber Fire, and then a private partnership with All Fitness Gym. That’s really seen something new and really groundbreaking for fire departments, to bring a revenue source from four different portions and all of the tiers of government all into one building. We’ve had many phone calls from different organizations in different areas and communities saying ‘How did you do this? What did you do to get there? Because we’re all trying to cut our expenses down, and how did you put this all together?’”