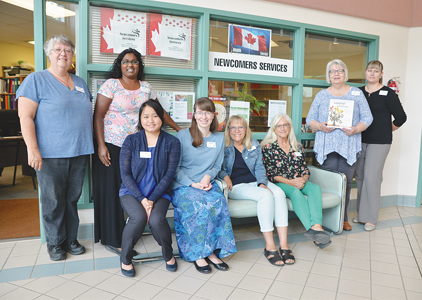 Much like any other organization or business, the COVID-19 pandemic has presented many challenges for the Taber and District Community Adult Learning Association (TDCALA).

To add on to that, the group is experiencing a financial issue due to lack of government funding that had been provided in the past.

As a way to hopefully recoup some of those lost funds, a delegation from TDCALA approached the Municipal District of Taber council to broach the idea of some temporary funds on Sept. 8.

“The issue we are presenting to council today is that for the last two and a half years, we have had newcomers funding,” explained Jane Brenner, executive director at TDCALA. “We applied through Alberta Labour two and a half years ago for a Newcomers Navigator, we called it, to welcome the newcomers in our community. At the time for applying for the funding, we anticipated serving 200 newcomers. If you’ve read the package we gave you, we served 550 newcomers from 29 different countries of origin. It was a lot busier than we thought it was going to be. We anticipated, when the call came out again, that the province would again fund us but we did not get funded. They didn’t fund the program based on that they thought the proposal was missing some gaps and we didn’t show the need for the service. We figured we did do a good job of that and we also thought the numbers would speak for themselves especially in rural Alberta.”

The group made a request of a one-time funding of $59,000 and a detailed budget was provided to councillors as to where the money would go.

As most of those costs are funded through other means already, the total from the requested amount from the M.D. would be $4,982.

“The original budget that we sent into the province was $149,900. The reason for that is because our newcomers had identified the need, and right now we have a full-time German translator in the office, they identified the need for a Filipino interpreter as well. We budgeted for one Filipino interpreter to come in and work one day a week. We had also budgeted for someone to work with the newcomer youth because they are struggling. So a Filipino couple had their children in the school and they weren’t being accepted. You have to think they look differently, they talk differently, they eat differently and they do everything differently. Sometimes we’re not as accepting, the youth especially,” added Brenner. “We pared the budget down to basically look at the wages of the three for the Newcomer’s Navigator. Right now she is working 35 hours a week and the ask is for 25 hours a week because we can pull 25 hours from another program we offer. For the Low-German translator, she is working 25 hours a week rather than 10 hours a week and we’re pulling 15 other hours from a program we are offering. We are able to keep the service at a level that was being provided.”

While TDCALA is based in Taber, the benefits they bring are for the entire region.

They broke down their membership base by per cent in terms of where they lived, with 80 per cent living in the town or M.D. of Taber.

“Forty-two per cent of (the newcomers) live within the town of Taber, 38 per cent are within the municipal district and 20 per cent are others. We have people coming from Stirling and others. The thing with the newcomer’s program is, it is not a program offered in any other rural community that we know of in southern Alberta. So when newcomers hear about it, they’ll travel to come get the services they need,” continued Brenner.

The M.D. was sympathetic to TDCALA’s financial situation, but they also brought up the fact they too are under tough times in that department. With continuing unpaid taxes on oil/gas leases and potential assessment changes, there was a desire to make sure they had room in their upcoming budget before making any final decision.

“I do think it is something essential for our community but at what cost can we allocate? That would be my question,” stated Deputy Reeve Jen Crowson.

“Any expenditure that is made is either contained within operating or capital budgets that council approves or otherwise approved by council. If council wants to see the expenditure, there would have to be a motion approving such,” replied CAO Arlos Crofts.

With budget season on the horizon for the M.D., administration further stated this item could be brought forward during those discussions to see if it could be worked in.
“We are currently (working) on our budget and the big unknown is tax collection. Where we are going to sit after tax collection, I wouldn’t be able to accurately estimate how that will look at the end of the year,” said Bryan Badura, director of corporate services.

With talks around assessment changes still looming for Alberta municipalities, some on council were worried this would turn into another situation where funding for local programs would continue to fall to municipal governments moving forward.

“I’m definitely in favour of the program and us temporarily funding it. My fear is this is another download. The Alberta government hasn’t given them successful funding they had previously even though they are running a successful program. I would hate to think we would have to continue to fund it so I don’t know if she should be doing some lobbying to get them financing so we don’t have to continue to do this. Without some funding this program will fall off, this is just a temporary stop-gap measure. In the future, if everything lines up, and it’s the worst-case scenario I don’t think we could afford to,” said Coun. John Turcato.
“I think (Brenner) is well aware of that and she doesn’t expect that. That’s why this was an emergency request for one-time funding, this isn’t how she proposes to move forward,” replied Coun. Tamara Miyanaga.

A motion to request administration to review the current budget status to determine if there is an opportunity to assist TDCALA’s request next year was carried.