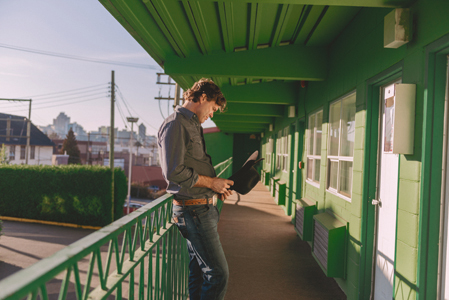 Lethbridge-based singer-songwriter Corb Lund’s newest critically acclaimed album “Agricultural Tragic” from Warner Music Canada dropped on June 26 but, in hindsight, it might have been more appropriately called “The Trevails of Touring Troubadours” with the COVID-19 pandemic putting the brakes on most live concerts around the world.

“It’s pretty strange,” Lund, a Taber native, said. “Our music business changed about 15 years ago with all the digitalization of everything; so a lot of the money went out of making records and radio play. I always said that didn’t affect me all that much because I was primarily a live performer. I like making records, but most of my income and most of my satisfaction comes from playing live shows. I figured that would always be around, but I didn’t see this coming.”

Lund says he and his band “The Hurtin’ Albertans” put a lot of time, effort and resources into the new album, but when it came time to tour, they were as helpless as anyone else in the face of a global outbreak of COVID-19.

“It kind of sucks,” he admited. “Because it is the best record we have made in a long time. Me and the guys put a ton of work into it, and it has gotten really good reviews, and this COVID thing couldn’t have happened at a worse time. We haven’t done any real touring since last summer because we have been recording and investing in records, video shoots, page banners and publicists, improving the van, getting everything ready for this tour.”

“Then we had a four-month tour starting in March all through the States and in Canada. We had the record all ready to come out. And then COVID hit. We did six shows in Texas and New Mexico, and then had to come home.”

Lund says there is really nothing you can do but accept the things you cannot change and try to move on.

“The upside of it all, if I compartmentalize that (financial) part and put it on a shelf in my brain, I have had a ton of time to really dig into new music and really dig into my guitar playing,” he said. “I haven’t had a summer off for 20 years or so because that is normally my busiest season. So I have been spending a lot of time at the ranch, a lot of time with my friends and family, and it has been kind of a good break in a way. I have been touring my butt off for years, and has given me some time to really sharpen my musical tools a little bit.”

While challenging for him, Lund says who he really feels for are the younger performers who really haven’t had a whole lot of time to make a name for themselves in the music business yet.

“I am fortunate that I can probably weather this better than most,” he stated. “I am fortunate enough I am established, and people will remember our band a year from now down the road. So I am not quite at the point where I am trying to scrape together rent money every month. But for younger bands, especially, I would say it is important to try to support them if you can. If they are having a paid live-stream, pay the $10 or whatever. Or buy some stuff off their website.”

He says what he and most touring performers have been focusing on with this ongoing hiatus from live shows is keeping their names out there, and looking for innovative ways to reach their audiences.

“We are fortunate the technology has arrived so we can do live-streaming,” he explained. “When you are in music, and you have a career, part of its short term where you gotta pay the rent. But part of it is long term, too. That live-stream thing falls under the umbrella of maintaining contact with your audience, and building your brand. There is value in that.”

To pay the rent some performers have been contemplating drive-thru concert events or socially distanced events, Lund says. He played one in Regina recently, and feels there are pros and cons.

“It was a socially distanced kind of deal where we played at a hotel, and the back wall of the hotel was 10 or 12 storeys and every room had a balcony. The hotel sold rooms with tickets included as a package, and we played on a parkade roof facing up to all these people. That was kind of fun, and it was cool, but the way the economic model is for live music is performers have capacities in their rooms and there is a margin to make what you make after you sell the tickets and pay the expenses. When you cut that in half or by two-thirds it doesn’t scale very well.”

Directly buying an artist’s CD, vinyl or merchandise from his or her website is still the best way to put money in your favourite artist’s pockets until they can perform live again, he says.

Lund admits it’s not just about the money for most artists, though. They love the experience of performing live as much as the audience enjoys listening to them.

“Most musicians I know genuinely love what they do,” he said. “Money or no money, we generally miss that (live) experience the audience is feeling, too, and maybe moreso; because it is concentrated among the performers. No one knows if this (COVID thing) is going to go on for another six months, or another year and a half. Playing live music is going to be one of the last things to come back. I tell people my job is to get groups of people into small, sweaty little rooms together; so it will be awhile.”

Lund hopes people will check out his album “Agricultural Tragic,” (a collection of a dozen hard-charging, western-style songs with Lund’s trademark lyrical flourish), now available online, and at most record stores. He is particularly fond of one song on the album.

“One of my favourite songs off the new record is ‘Never Not Had Horses.’ That’s about my mom. She still lives in Taber, and she grew up in Cardston on the ranch we still have in my family. She is about 78 years old now, and a few years ago we had to put down her last couple of horses because they weren’t going to make it through the winter. They were too skinny and too old. It was a sad day, and we were all waiting for the vet. She just kind of commented that she had never not had horses from the time she was born. I had been meaning to write a song about Mom for awhile, and couldn’t figure out quite the right angle. When she said that my writer-antennae went up, and I knew that was a song.”