Chamber about to break ground on new building 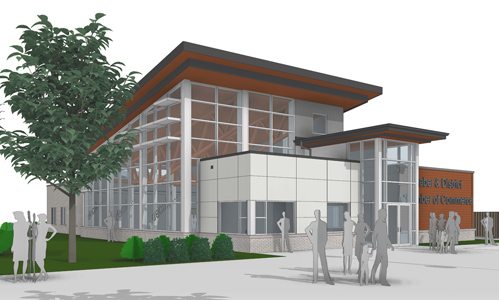 The Taber and District Chamber of Commerce are finalizing details and preparing to break ground on their new office building in downtown Taber.

On Aug. 29, chamber representatives and local dignitaries gathered at the 5400 Block of 47th Avenue for a sod-turning event for the new building, which will be just under 7,000 square feet.

“I would say we’re about a month away from actual shovel in the ground. October we’ll probably start. We’re just about ready for tenders,” said Harry Prummel, chamber board member and building committee lead. “We’re just doing the final wrap up with the town as far as development permits — not an issue of course, just a matter of some paper work — and then we’re ready to go. All the blueprints are done, everything is done.”

In December 2019, town council passed a motion to acquire 1.3 acres at 5431 47th Avenue in two separate parcels for $904,000. One of the lot parcels is being utilized by the chamber for construction of the building. In late July 2020, the town also moved forward with facilitating a $1 million loan to the chamber for construction of a parking lot and sani-dump as part of the project.

“A rough estimate, it’s a million dollar project,” said Prummel. “It’s public knowledge that the Town of Taber and the chamber have co-partnered on this. The town bought the land, so just like the town did with the gymnastics club, they’ve done the same with us. They’ve debentured us a million dollars, and then we pay them back over 20-25 years, whatever it takes to pay them back. We’ll be self-sufficient with the tenants that we have in the building. We will be able to pay our expenses plus pay back the town. It’s a win-win for everybody.”

Prummel explained the chamber hopes to incorporate an educational aspect to their new building that could be utilized by local schools.

“No retail. There’s going to be a main foyer, an open area where we’re hoping to have ag displays. We’re hoping to have areas where even schools can come in to do a little education as to what’s happening in the area as far as oil, ag, industry. So we’ll have videos set up where we have full screens where they can actually do a little teaching in there. So that’s going to be one area. The chamber of commerce of course is going to be in there. There will be a board room in there, if somebody needs a board room in town they can come in and use the board room. So it’s community-minded as well. And then there’s four offices that are going to be available for somebody to rent. We’re hoping to keep it in line with tourism, economic development, more government kind of stuff.”

There is no official timeline for completion, but Prummel believes the chamber should be able to move in to their new building by next summer.

“We will for sure be ready by this time next year, so Cornfest 2021. That’s the long term, but we could easily be in there next summer some time for sure.”

Ongoing space constraints and issues surrounding exposure and visibility in their current Taber Community Centre location finally prompted the chamber board to begin serious plans to construct a new home.

“Even some of the prominent members of the town didn’t know where the Taber chamber of commerce building was, or where we were located. So image was a real problem for us as far as trying to attract new board members,” said Prummel. “But even just the 21st century, just moving forward. It’s been something that has been kicked around for many years…but for the last 6-7 years there’s been a few of us that were pushing this. So now where we’re going to be we’ll be identifiable, people on the highway will see us. The tourist information will be in there. People can pull in with their RVs and park there and venture on downtown. It just makes us more visible to the town and general public, and just to people driving through town.”

Commenting on the Town of Taber’s renewed relationship with the chamber and willingness to support their project, Prummel feels the municipality is turning over a new leaf.