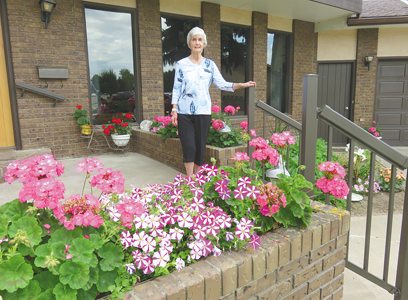 Submitted by
Taber Communities in Bloom

Our final 90-plus year old gardener that Communities in Bloom would like to celebrate this summer is also a longtime resident of Taber, Norma Rabusic.

Norma was born in Central Butte, Saskatchewan located about 100 kms northwest of Moose Jaw. Her parents owned farmland in the area and it was here that the family of five brothers and three sisters learned the operation of the farm, cattle ranching, planting cereal crops, and harvesting.

Included was always a very large garden that sustained the family during those years (1920’s and 1930’s).

Norma attended Central Butte School from Grades 1-9 and completed Grades 10-12 at a private boarding school called the Convent of Sion. After graduation her ambition was to become a teacher so she furthered her education and completed her training in Moose Jaw. It was here during teacher’s training that she made a good friend in Joanne Hagel (better known later to the people of Taber as Joanne McDonald).

In 1951, Norma and Joanne heard of openings for teaching positions in a small town in southern Alberta called Taber. Two years prior to this an Air Force building was moved to Taber from Medicine Hat and remodeled into three classrooms. Three additional classrooms were added in 1951 and it was to this school, called the South Side School, that the two friends were hired for their first teaching positions. The school was on the property of the present L.T. Westlake Fine Arts Elementary School.

At a Catholic Youth Rally in Lethbridge, Norma met a handsome young man, Frank Rabusic, who captured her heart. They were married a year later in 1952. Their first five years of married life were spent on the Rabusic farm in Raymond after which they ventured on their own and purchased an irrigation farm in Taber in 1957. It was here that they raised their four sons and one daughter.

Norma learned many skills during her time on the farm. Besides field work and looking after cattle, her particular joy was her huge garden. Many varieties of vegetables and berries were all meticulously planted, harvested, and stored. Her kitchen always had the tantalizing aroma of canning. Pickles, jams, jellies, and canned fruit filled the pantry with yummy treats to be enjoyed during the winter. In 1974 Frank and Norma were able to take a trip to Czechoslovakia which had always been a dream of theirs.

Frank and Norma made the move to town as a couple of the sons took over the management of the farm. Their new home, purchased in 1981, is situated on two pie-shaped lots which gave them a large area for their landscaping ideas to take shape. The front yard is treed on the left side providing early morning summer shade and the foundation of the home is bordered with shrubs and perennials.

Raised flower beds, filled this year with dark pink geraniums and petunias, are still lovingly cared for by Norma. On entry to the back yard, you are amazed at the expansive area with its beautiful shade trees, well manicured flower beds, patios, and of course a large sunny area for her garden although it is a lot smaller than the one she had on the farm. She still had enough room for apple and chokecherry trees, gooseberry bushes, raspberries and strawberries, and a large array of vegetables which are still enjoyed by family and friends.

Although Norma lost her beloved Frank in 2007, she still lives in her home and does all her own cooking, most of her cleaning (because of COVID-19), and tending to her yard. In August 2019 she fell and broke her hip and so has had to accept help this summer from a grandson who has looked after the garden but she still cares for her flowers. Family is only a phone call away if she needs anything and her family has expanded to seven grandchildren and eight great-grandchildren with one more due shortly.

Norma, at the age just shy of 92 years, continues to enjoy living in her home and caring for her yard. She says it is a priceless gift that gives her life much joy.