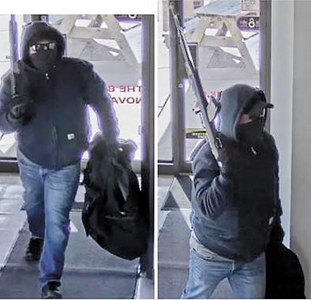 June proved to be a particularly busy month for the Taber/Vauxhall detachment as things started to open up in the province.

In highlighting their June to Municipal District of Taber council at their regular meeting on July 14, Sgt. Gord Yetman detailed a number of high profile arrests made during last month.

The first arrest highlighted was of the bank robber who had targeted banks in Vauxhall, Magrath Granum, Caroline, Trochu and Calgary.

A search warrant was conducted at a storage locker resulting in the seizure of an SKS rifle and $2,750 in US currency.

“The bank robber, the Vauxhall bank robbery, both of them, have been solved. I took it upon myself after the last one to raise some concerns as to this being a series of robberies. After I brought those concerns forward, our Crime Reduction Unit became involved. They have tremendous resources available to them, plus it was believed the suspect wasn’t from this area anyway. We were able to get a good line on that and as a result, the suspect was quickly identified and apprehended, as well as some crucial evidence to support the bank robbery charges. He has been charged with, I want to say, in excess of 20 charges. That is eight bank robberies, seven of them in Alberta and one in B.C. The RCMP has laid charges in all of the Alberta ones,” explained Yetman.

Another of the files highlighted for council involved a search through a nearby farmer’s field that ended with an arrest and charges.

“Based on information from the public, we went out one morning and found a stolen vehicle. The guy that was in it had abandoned the vehicle, fled into a nearby field and a large search ensued. The reason I bring this up is, at one point we had about 10 RCMP resources out there between Taber, Coaldale and we even had a Redcliff member who was on the highway and came down to assist. We had a police dog and we had a drone for specialized resources. In addition, a plane started to fly over the field and some crop service with another drone. Ultimately, someone actually walked over the suspect as he was hiding in the field. The police dog had searched for the track and because of some contamination out in the field, didn’t really catch on to the suspect. One of the farmers that was out helping us walked right over top of him and that was that. We were able to get him into custody and he faces charges as well,” said Yetman. “Actually, the vehicle was full of stolen property and the vehicle itself was stolen out of the town of Taber.”

RCMP have also been working on a sexual assault case that has resulted in several suspects being identified.

“We also had a very serious sexual assault. Members were able to quickly get on that and by using a Crime Reduction Unit analyst, we were able to search social media and identify the majority of the suspects and I say, suspects. We are well on our way to charges on that one,” continued Yetman.

The final case noted by Yetman was around a party near the hamlet of Grassy Lake and the detachment set up a quick check stop.

“We had a large party out at Grassy Lake and our members got out there and realized there were about 200 people. (They) quickly decided that it would be a great opportunity for a check stop with the Bow Island detachment. As they were shutting down the party, they checked 75 (or so) roadside screening tests,” said Yetman. “Surprisingly enough, everyone they tested was fit to drive which is good.”