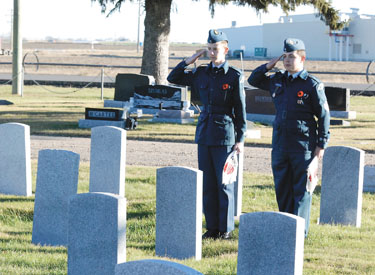 As part of Canada’s celebration of the 75th anniversary of the end of WWII, throughout summer 2020 the Times is publishing a series of articles on local history, our military past, and the contributions of veterans and citizens.

The Commonwealth War Graves Commission (CWGC), along with most of the world, have had a rather unusual 2020.

Despite the setbacks that have risen from the global COVID-19 pandemic, they have still been able to do a lot of their regular work, including maintenance of their graves across the world.

“Maintenance and inspection are two different things. Up until this year, we were on about a six-year cycle so we would come out every six years. We are a bit luckier here than they are in Europe as all the grave markers in Canada are made out of granite so they tend to weather a lot better than the stone that is used over in Europe. We come out every six to eight years now, we’re looking at home often we do come out. And depending on the results of those inspections, we organize the maintenance and care of those. We physically may not be there but we have contractors in the local area that help clean the headstones when we need help to maintain them. In a lot of cases, the cemeteries cut the grass for us because they own the cemetery and they do any other maintenance we need done,” said Loveridge. “The maintenance work and all of that has gone on fairly well. We have a lot of our contracts out for the year and a lot of our local contractors have been able to get out to the cemeteries and be able to do the work that we need done. That part has gone fairly well but the part that is a little more difficult for us is the inspection piece. We’re working through that now in Ontario, we’re still self-isolating here, and I know each province is slightly different but that has restricted our staff from travelling. We are coming up with a plan but I think the good thing for us is if we can’t get to it this year, we will catch up and get to them next year or the year after. And we know that if we have issues, we have a pretty wide network of both contractors and people interested in helping us out.”

For the rest of the year, the CWGC is expecting things to continue as per the usual.

“As much as we can, it’s business as usual. Some of the other projects, we have two memorials we are doing work on in Canada, one in Edmonton. We are rebuilding a Cross of Sacrifice in Edmonton which after our last inspection, needed some work so that project is still proceeding forward,” said Loveridge. “From the sense of where our war dead are, our contractors still have access.”

In the Taber area, three CWGC graves are looked after by the group — one in the Taber Cemetery and two in the Grassy Lake Cemetery.