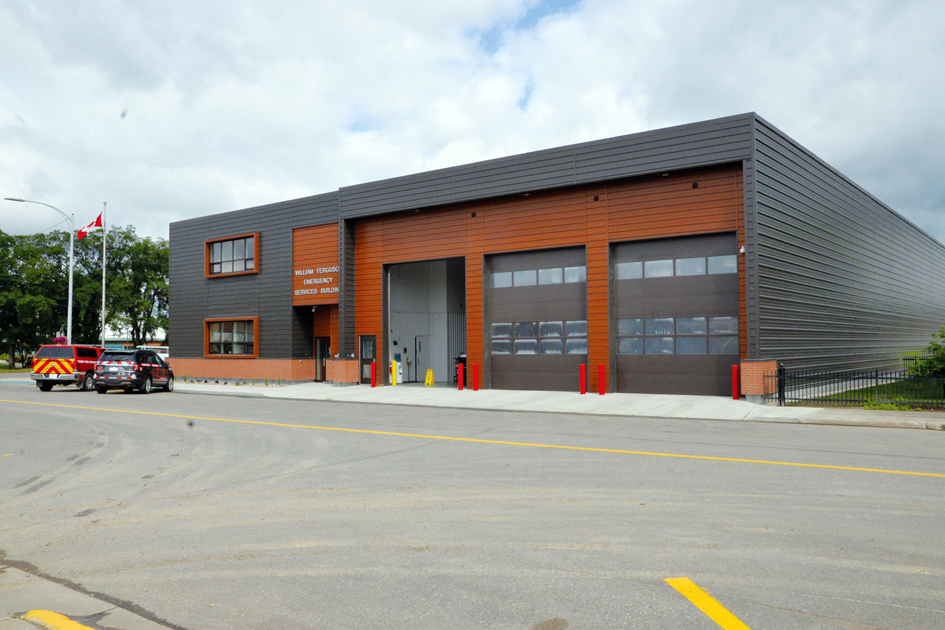 RELOCATION: The Taber Fire Department has officially relocated to their new home in downtown Taber. After months of construction, the building was finally ready to house not only the Taber Fire Department but also Alberta Health Services, both of which moved in last month. Due to the COVID-19 pandemic, an open house hasn’t been set yet. TIMES PHOTO BY COLE PARKINSON

The Taber Fire Hall is fully completed and Taber firefighters have started unpacking boxes in their new home.

On June 9, the Taber Fire Department obtained the keys to their new building and started making it their own after over 20 years at their previous location.

The honeymoon phase didn’t last long as the firefighters were soon called out to action shortly after moving in.

“We moved in on June 9. We’ve seen good call volume out of this hall and the first hour that we were in here, we got a call. Everything moved seamlessly and being downtown, it gives our members a chance to come in quickly and respond out. In asking neighbours if things have gone well, the response has been good. They didn’t even know we were running out of here yet. The ambulance moved in on (June 15) and they have been working and sleeping at the building,” explained Taber Fire Chief Steve Munshaw.

Since relocating, the group has been able to start with setup. The estimated $3.5 million facility was built within 10 months and from the financial side, they are reporting good news.

“We are under budget, the numbers haven’t come in yet but I can confirm we are under,” said Munshaw.

While the building may be in a prime location within the town of Taber, being attached to a post office was unconventional compared to other fire halls.

On top of that, the location of All Fitness in the basement also presented a different component to the new fire facility. Despite this irregularity, the partnership between all parties has been great, according to Munshaw. “Our town administration and our CAO, working with our mayor and council, were a great partnership. We were able to bring this building (post office) into the fire hall and we have a continued partnership that has been in existence for 70 years with Canada Post. We want to make sure it moves forward and Canada Post has been wonderful. With the gym, a local business being a partner, that really brought in our private sector along with federal and provincial bodies together. For us, we had a gym (at our old location), we need to support our people that are working and they need to work out to make sure that they don’t get injuries. How do we do that? Keeping that gym there, and giving a good lease rate to a local business, Jenna Langhofer, she was happy to regain that lease. There’s a lot of moving parts between AHS full-time employees, our full-time employees and then you add the post office and then gym memberships. Overall, Carolin Peters at the post office has been excellent to work with, Jenna Langhofer has been amazing and AHS, too.”

Another big portion of getting the building’s finances in place was due to $1.5 million coming from the William Ferguson estate.

Being in downtown Taber is a major upgrade for the department after spending over 20 years in the industrial end of the town. In their number of calls so far, response to and from the fire hall has been much shorter.

“Number one has to be response time. The reduced time to get to people in need was the number one goal by both council and administration so we could take care of our ratepayers. That has already shown to be a positive impact in the week(s) that we have been here. Our responses to and from the hall have decreased, which is excellent. That has eliminated any building requirements for our community. It’s also benefited our community walk by and our connection to people. We’ve had people stopping by and connecting more. We have also been out walking around and doing more inspections,” said Munshaw.

With COVID-19 stalling most things in the early spring, the Taber fire hall wasn’t affected as much as it could have been.

Due to the amount of work done already and the necessary labour VHL was able to do after the pandemic hit full stride, the facility was able to reach completion on schedule.
“Working with VHL as a partner in town, they really stepped up to the plate. They were able to make sure they met all of the requirements, all of their needs and were able to keep going. We were able to hit the timelines that were originally established and get us moved in within that 10-month timeframe. If we look at the $3.5 million building with an originally constructed building from 1953, adding all of the square footage, and meeting the month to month requirement. Hats off to VHL. It’s beautifully done,” continued Munshaw.

As far as when Taber and area residents will be able to take in all of the sights of the new fire hall, Munshaw and the fire department aren’t able to confirm a hard date due to the current state of the world.

While they have a rough idea of when they could conceivably put together an event, until Alberta opens up into Phase 3, those plans won’t be set in stone.

“We’re definitely establishing a timeline. We’re trying to get through and into Phase 3 for when we are allowed to open up and have more people get together. As soon as Phase 3 comes into effect, we’re hoping the end of summer, maybe August or September. We’ll see how that progresses. If it’s sooner, we’d love to host it when it’s still nice and sunny out. Right now we are working on some history pieces and plaques to be placed around the fire hall,” Munshaw explained.

As far as his favourite part of the new facility, Munshaw explained the additional space for fire equipment is the nicest amenity available in the hall.

“The apparatus bays, how beautiful they are and the growth this community has. They have really established a fire hall that will serve their needs for years and years to come. There is growth for fire trucks and personnel.”

With most of the hard work done, Munshaw was able to reflect briefly on all that has been done in order to get the hall ready for firefighter occupation starting in June.

“Thank you to everybody that had a part,” he said. “All of our firefighters that spend evenings and weekends making this place their own. The community itself for coming together and supporting this goal. And of course, town council and town administration.”