Court takes on new look during COVID-19; Taber cases being handled in Lethbridge 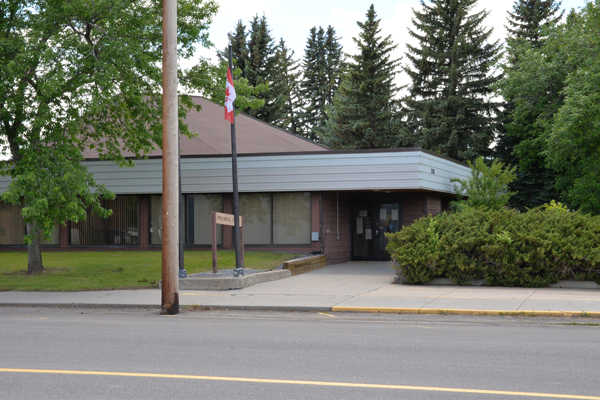 The hallways of the Lethbridge courthouse are eerily silent these days.

Only a few weeks ago they were bustling with people who came to pay traffic tickets or needed to attend a hearing, criminal or otherwise, in any of the eight courtrooms. Now, however, no one is walking the hallways, unless it’s a sheriff. Some court employees are still at work, but there aren’t any customers for them to serve while the courthouse is closed to the public, and of the few people who show up, most are turned away at the door.

COVID-19 has had the same impact on courtroom hearings. All but Courtroom One – docket court – and occasionally Queen’s Bench, are closed, and the only people in docket court are the judge, clerk, duty counsel and Lethbridge Herald reporter. Missing are the Crown prosecutors, lawyers and individuals whose alleged crimes have brought them to court. But that hasn’t stopped court proceedings, just changed the way they function.

Courtroom One is not only handling its own matters, but cases normally heard in the other courtrooms and other courthouses in Taber, Cardston, Fort Macleod and Pincher Creek. Crown prosecutors, who work from home or sit in their office across the hall from the courtroom, are plugged into what’s called a Polycom. It allows them to address the court electronically rather than in person. Defence lawyers are also plugged into the system and can deal with their matters from their offices or, with coffee in hand, the comfort of their homes. The judge and clerk can hear everyone through the Polycom and all the lawyers can hear each other, just as if they were physically in the courtroom. They can also hear any of the accused who are in custody and appear by closed-circuit TV from the Lethbridge Correctional Centre or other correctional institutions, such as the Calgary and Edmonton remand centres.

Some defendants, although in custody, are unable to appear by CCTV because after they are arrested, they are immediately placed in isolation and tested for COVID-19. Their matters are simply adjourned for several days until they are no longer in quarantine and can appear on the big screen.

“Thankfully, at this point, there are zero cases,” Janecke said, referring to the Lethbridge Correctional Centre.

Most non-urgent cases and cases where the accused are not in custody are automatically adjourned for 10 weeks. However, in-custody trials, as well as bail hearings, also called show cause hearings because the accused must show cause why they should be released, are being held to protect the rights of the accused.

“We don’t want people just sitting in custody without due process,” Janecke said.

Most matters set for Court of Queen’s Bench have been adjourned to June, although bail reviews are being held and special arrangements are made for in-custody trials. Jury trials and jury selections, on the other hand, are not running.

Although lawyers are rarely seen in the courthouse these days, duty counsel attends every day to handle fresh arrests and accused who haven’t yet hired a lawyer. After all, it’s apparent offenders aren’t self-isolating and are still out committing crimes. Given the numerous delays and adjournments, the Crown and defence lawyers must keep in mind the Jordan decision. Regina versus Jordan is a decision by the Supreme Court of Canada that ensures an accused is tried within a reasonable amount of time. It places a ceiling of 18 months between the charges and a trial in provincial court without a preliminary inquiry, and 30 months in Court of Queen’s Bench. The deadlines can be moved, however, under exceptional circumstances.

“I would certainly anticipate a worldwide pandemic qualifies as exceptional circumstances,” Janecke said.

Traffic court is also a victim of the Coronavirus. Traffic court is closed until further notice, but fines can still be paid online at http://www.albertacourts.ca/pc/resources/pay-fines; by mail to the provincial traffic production centre, 601 5 St. SW, Calgary, Alta., T2P 5P7; or through registry offices at http://www.servicealberta.gov.ab.ca/fin d-a-registry-agent.cfm. Anyone not wanting to dispute a ticket, or wanting to adjourn the matter or plead not guilty and set a trial date, can contact the courthouse by phone, 403-381-5224; email, traffic.lethbridge@just.gov.ab.ca; or fax, 403-381-5763. Anyone who fails to contact the court on or before a scheduled appearance, trial or application date, may be convicted in absence or an arrest warrant may be issued. Despite the vast and “unprecedented” changes in such a short period of time, Janecke said she’s impressed by how the courts and everyone involved have worked together to keep things running smoothly, while at the same time ensuring people who face charges are protected from the virus and still able to deal with their matters.

“We want to keep people safe but we want to make sure their rights are protected,” Janecke said.

Carla Jones, communications adviser with justice and solicitor general, said ensuring continued access to the justice system and maintaining the safety of Albertans are the government’s top priorities during the pandemic.

“We are continuing to follow the advice of the chief medical officer of health and adjusting our operations as needed to help prevent the virus from spreading,” Jones said in an email to The Herald.”Public access to all courthouses in Alberta has been restricted until further notice and plexiglas barriers are being installed at public facing counters in all open courthouses and resolution service centres to ensure the safety of staff and members of the public.”

Jones says Alberta’s courts have made a number of changes in response to the COVID-19 pandemic, which makes it possible for Albertans to access the justice system while maintaining physical distancing protocols.