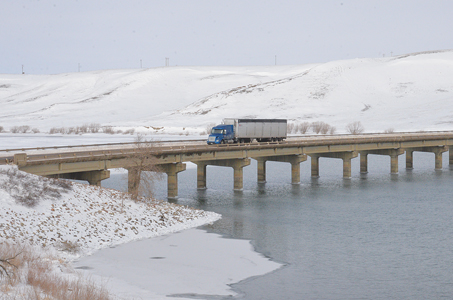 WATER WORKS: Town of Taber council have approved a new intake and pump station project at Chin Reservoir to be constructed in 2024. TIMES PHOTO BY TREVOR BUSCH

The Town of Taber has taken the first step toward securing the community’s future raw water supply through endorsement of a new intake and pump station for Chin Reservoir.

“When we looked at what is a good, reliable water source for the town of Taber as far as residents and businesses, we actually did a quite comprehensive study of all the water sources around here,” said public works director Gary Scherer at town council’s March 23 meeting. “What you don’t see is one we actually did independently, which is underground water, is there an aquifer in the Taber area? Basically it came out that no, there isn’t one. There’s a high water table, but not enough for the whole community.”

“There has been years, in recent years, where water levels in Chin have not been significant enough for you to guarantee operation of the Chin Pumping Station,” said Andrew Kleisinger with MPE Engineering, commenting on the firm’s report. “So that’s where the idea comes about running the intake line further out into Chin, into an area where Chin is deeper.”

Two main alternatives were reviewed by MPE Engineering, including the recommended upgrade to the Chin Pump Station, as well as potentially rehabilitating the Barnwell Reservoir.

The Chin Pump Station upgrade would include the construction of a new concrete structure adjacent to the existing pump station, a new intake pipeline extending out into Chin Reservoir to an elevation below the minimum supply level, submersible turbine pumps with variable frequency drives, and a new control building. This project is expected to cost $3,763,000 (inclusive of 20 per cent contingency, engineering and geotechnical). Under a cost-sharing scenario, the Town of Taber would contribute $3,492,064 to the project, with the Village of Barnwell forking over $270,936.

Rehabilitating the abandoned Barnwell Reservoir would include expanding capacity to allow for one million cubic metres of storage, increasing the berm height to increase the storage within the same footprint, interior reservoir baffling to improve flow characteristics, new inlet and outlet control structures, an upgraded pump station, and reservoir aeration to improve water quality. This project is projected to cost $13,805,000 (inclusive of 20 per cent contingency, engineering and geotechnical). Under a cost-sharing scenario, the Town of Taber would contribute $12,811,040 to the project, with the Village of Barnwell taking on $993,960.

MPE Engineering noted that in both cases the Village of Barnwell’s share was calculated based on the percentage of total raw water volume used. Taber uses approximately 93 per cent of the volume, while Barnwell uses seven per cent.

“There would be a small Barnwell cost share, just based on the percentage of overall volume,” said Kleisinger. “Obviously the lion’s share is Taber, but Barnwell conceivably should have some skin in the game because they are reliant on that Chin supply for their source of supply during the non-irrigation season.”

“It would have to be twice the size we have currently, so the cost to get that clay would be almost the same as adding to Barnwell Reservoir,” said Scherer. Other factors, such as water quality, would also have to be considered under such a proposal.

After a series of questions regarding Barnwell Reservoir, Coun. Joe Strojwas appeared to favour the alternative proposal.

“The unknown factor here is the fact that we don’t know what’s going to happen as far as water storage and snow intakes from the mountains. I know you made reference to the fact that the pump would always be below the level of the base, but there could still be an issue somewhere down the long line in drought conditions that could reduce the amount of water that is brought into that there. So I would think an additional storage capacity for the town would be the most beneficial option on a go-forward basis.”

CAO Cory Armfelt suggested a new intake and pump station at Chin was still the preferable option from the perspective of administration.

“If there is a low water amount in Chin, if we expand the reservoir near Barnwell, that would very likely be empty because there will be nothing flowing through the irrigation districts. So the only way to get water would be to reach out and grab whatever is left in Chin in an extreme drought year, because there won’t be suitable supply through the irrigation districts to fill that reservoir south of Barnwell.”

“I’ve looked over the whole proposal quite intensively, and I do not like the thought of expanding the Barnwell Reservoir. Simply because even if you do dig it down and line it, you’re still going to have to have a clay base. I think any time you can bring water into town in a pipeline, you’re way more efficient and you have way better control over how you can bring your water in, pre-filter your water, so your water treatment plant is doing a whole lot less work than if we tried to bring it in to more basins. I think the only option is to actually pump it from Chin.”

Scherer was more blunt about the need to move forward with the Chin project.

“We’re just looking at ensuring we have a good, reliable raw water source for 25 years. We cannot guarantee that at the Chin Pump Station right now. So for everybody to feel good about your supply, this is the only viable option that we’ve found.”

Following discussion, council voted 6-1 to direct administration to add the New Intake and Pump Station at Chin Reservoir to the 2024 capital budget, and to apply for grant funding for the project. Strojwas opposed the motion.

A number of federal and provincial funding programs may be available to assist with the project’s cost, with some eligible for up to 50 per cent. Once funding is secured, the municipality could proceed with detailed design, which would include commencement of discussions with applicable regulatory agencies.