Substance issues a concern for all families 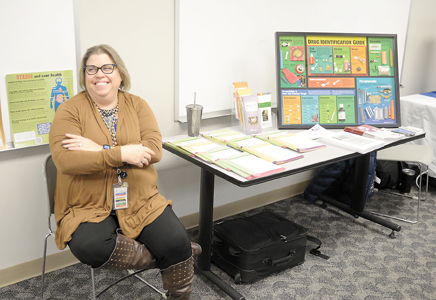 The following is the first article of a multi-part series stemming from the ‘Not My Kid’ presentations held at the Taber Police Station Dreaddy Room, featuring several guest speakers to empower parents on teen substance use.

Alana McPhee, Taber Community Against Drugs chairman and addictions counsellor with Alberta Health Services, has worked with families on an individual basis for those struggling with drug and alcohol issues.

“Addiction does not affect just one person. It definitely affects everyone around them. I work with husbands, and wives and children, and friends,” said McPhee.

A common question McPhee is asked is ‘can anyone become addicted?’ in which she noted most experts would say yes. There are certain risk factors associated with addiction, making one more likely to fall victim, be it genetic, psychological with trauma (depression) or environmental issues in what is around you with your occupation or who you hang around with. Also, can substance use start at a young age?

“Those are the bigger risk factors that we see for addiction. Having one, or even more than one of these risk factors doesn’t guarantee it of course, but it does put you at a higher risk,” said McPhee. “We really, really want parents out there to understand that substance use can happen to anyone at any time. Even if you come from a certain socio-economic status or a certain set of beliefs, it doesn’t mean it can’t happen. Ignoring potential risks is the worst thing you can do. That’s why we wanted this evening, to reduce that stigma and stereotypes and give parents some awareness of what’s going on out there.”

Amanda Lawrence of Family and Community Support Services, has been with the organization for 11 and-a-half years, working with all types of youth from all walks of life. Her advice she gave the packed audience at ‘Not My Kid’ she takes to heart, being a parent herself.

“I do have four kids of my own, and three of them are teenagers. Every day is a new adventure,” said Lawrence.

Lawrence talked of three specific issues during her presentation to parents and community members, with the first being perspective. Families watch their babies grow into toddlers, toddlers into children, young children into youth and then to teenagers. The process needs to remain the same whatever the age category.

“I tell parents all the time, that we need to raise our teens and our youth the same way we did our toddlers. There’s a lot of similarities that we sometimes don’t think about because we want them to be responsible,” said Lawrence. “We forget that they are struggling with identity, they are struggling with problem solving and regulation and feelings. Those new thoughts and experiences with information seeking. There are sibling rivalries and relationships. It’s new waters for both them and the parents. Even if you have had a teenager before, each kid is a full-time job and they are very different no matter how some things remain the same.”

Time investment should be just as high for teenagers as it was for toddlers, whether the teen is pushing the parent away or not. That perspective includes concentrating on all the good things Taber is doing and not just focusing on the bad.

“Taber is doing amazing. We talk about the addictions, the drugs that are coming into Taber and the risk factors we are going through. But, I need you guys to know, that we work really hard with the youth of Taber. We are running resiliency projects in Grade 5, we do the PARTY (Prevent Alcohol and Risk-related Trauma in Youth) program in Grade 10. For National Addictions Awareness Week we focused on youth and refusal skills. There’s a lot of mental health and coalitions going on with committees,” said Lawrence. “There are agencies from all over dedicated to youth in Taber. Being there is a full house here, it means the community is engaged.”

Bridging with perspective is having the courage to have those tough conversations with your kids and having them sooner rather than later.

“We need to have them before things are happening. I saw a statistic one day that teens use alcohol and drugs six months before their parents find out,” said Lawrence. “If we are having the conversation for the first time after they are using, it’s not impossible, but it’s a little harder and a little late. Just remember, that conservation is going to be awkward. It’s going to be about sex, and drugs and alcohol and relationships and everything else going on in this world. It’s going to be awkward for you and them, but you got to remember, that’s OK and it’s normal.”

Lawrence noted interrogation usually doesn’t work, but observing things as you participate in everyday life can go a long way to finding out what is going on in your child’s life.

“One of the things I know my parents did when we were kids, was drive us with sports teams. They would drive us everywhere. That’s a really good thing to do when you are trying to figure out your kids and their friend groups,” said Lawrence. “Driving kids to the volleyball tournament, you are going to hear things you might not normally hear at home and I’m learning that as a mom.”

If things do start to escalate where substance issues have become prevalent, Lawrence encouraged parents to talk to understand, and not to shame.

“Start the conversation with ‘I’m worried about you. ‘Do you need to talk to me about anything?’ Being involved in your children’s life seems to be a redundant thing to say in communicating, but for some people it isn’t. That’s not just your own family, it extends into friends and to classmates as well.”