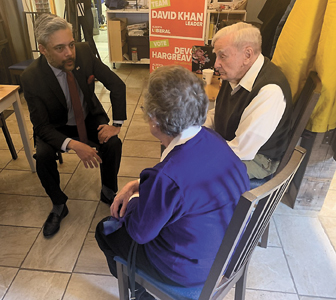 Alberta’s finance minister is scheduled to table the province’s 2020 budget on Thursday.

In anticipation of that, David Khan, leader of the Alberta Liberal Party, has made stops in Lethbridge, Edmonton and Calgary this week to take the pulse of Albertans and get feedback on how locals have viewed Jason Kenney’s United Conservative (UCP) government so far.

“This week is going to be busy with the new spring session of the legislature opening (this past) Tuesday and we will be releasing a shadow throne speech to set out our priorities and what we would do if we were in government the next year,” said Khan at a Pints and Politics event at Theoretically Brewing in Lethbridge. “With the budget coming out on Thursday, we’ve seen some really, really deep cuts and this government telling us they aren’t making cuts when they really are and I think these cuts are going to be even more severe in the upcoming budget. I’m here to understand what your concerns are, because we want to build that into our response and present a different vision for the province that this government is presenting for us. A forward-thinking vision with our mantra this past election, which has been borne out this past year because this government’s really taking us backwards. The cuts to programs to diversify the economy, the tax on post-secondary education, the cuts to the K-12 eduction system and a real tax on the healthcare system.”

While the Alberta Liberal Party was but a whisper in this past provincial election, finishing behind UCP, New Democratic Party and Alberta Party, the party has seen a spike in interest and a strong foundation among the age 18-24 voters. Khan spent his time at Pints and Politics listening to and answering questions from the gallery. One of which was with parties to the right of the spectrum joining forces (former PC and Wildrose) to form the UCP, if parties considered on the left like Liberal, NDP and the moderate Alberta Party would do the same to unseat the UCP?

Khan feared such a move would resemble more American-style politics with its two-party system.

“I think support is really dropping for the premier and UCP in numerous polls now. I think people are really waking up, especially working-class people — the 99 per cent of us that aren’t the one per cent, are waking up to the fact that they are not getting what they wanted when they voted UCP,” said Khan. “I’m really passionate about electoral reform and proportional representation in our legislature. In the long term we have to move to that. We want a multi-party system, we don’t want a two-party system, because we have seen how that functions in the U.S. and it polarizes and becomes very dysfunctional. People are scared into voting one way or the other and we end up losing solutions that involve compromises and building bridges. I passionately believe that we need a multi-party system here in Alberta and in the country. I would caution that we not make drastic decisions due to one election, and instead look to the long term.”

Another concern brought to Khan’s attention was the Orphan Well crisis that sees well sites that have been permanently taken out of production that do not have any party legally or financially responsible to deal with reclamation obligations.

“The estimates are anywhere from $53 to $260 billion dollars in oil and gas environmental requisition liabilities. It’s a huge ticking time bomb. It’s not just an environmental concern, it is also a concern for our energy industry because the big players that invest in the orphan well fund end up holding the bag when these smaller firms close down their operations,” said Khan. “In the last legislature, we put forward some concrete solutions to address that. Things like a clean-up bond, so money a company has to pay in advance, essentially a deposit to ensure there is money remaining to clean up that well at the end of its lifecycle. Not allowing wells to be suspended for decades and decades when they are probably never going to produce again. Other jurisdictions have the same challenges in North Dakota, Texas and California. And they are all further ahead than us in addressing the problem, and not in ways that destroy their energy industry.”

Khan did not have kind words about the UCP’s energy ‘War Room’, calling it a waste of $120 million over four years.

“We have to invest in technology and help the Alberta energy sector become greener. We have to diversify our economy and move to a lower carbon future which is what the entire world is doing. Instead, this UCP government is doubling down and tripling down on the oil and gas sector,” said Khan. “It simply embarrasses our province really. Instead of promoting the diversification that we are doing and the strides we are doing in greening our economy, they are just making enemies. It is incredibly frustrating to see our province getting taken down the wrong path for really ideological reasons.”

Picking a new fight almost weekly, being confrontational in finding someone to blame, Khan added it is a political shell game to distract the electorate in missing how campaign promises are not being met and the lack of concrete growth in the province is being missed by your average voter’s gaze.

“Mr. Kenney’s rhetoric, and we saw it throughout the campaign where he was promising a referendum on equalization or separation — I called it political theatre. He goes on the attack, he blames everyone else and I think it is really to distract from a lack of real sensible solutions for the challenges we face in Alberta,” said Khan.

“Everything about this party and this government seems to be about short-term thinking. It is very easy to attack Ottawa, or turn off the pipeline to B.C. which is not constitutionally legal. It’s a real distraction because they don’t have any real solutions for the challenges. They don’t have a good long-term vision for the long-term prosperity for the province. People are slowly starting to realize what they voted for is not what they are getting. They are like a bull in a china shop, they are tearing down one thing after another on a weekly and monthly basis, they are attacking people on social media. Gaslighting is really a term that can be applied to this government. It’s a toxic way of governing.”