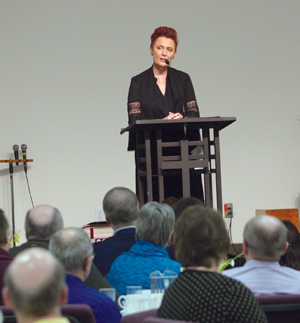 Held at the Taber Evangelical Mennonite Church on Feb. 7, Crosson brought forward her experiences of fighting for the rights of people of faith and faith-based groups in courts in Alberta, British Columbia, Ontario and the Federal Court.

“I went back to school in my early 40s, it was my third career,” said Crosson. “I was sitting around in my kitchen with people of like faith and my husband. We were talking about a darkness we were seeing upon the nation. This was a few years ago when you looked around a corner, you couldn’t quite tell what was back there but you knew it was dark and there was something moving in the dark. We didn’t know what it would become, back then we thought maybe it was all about tolerance. Maybe it is all about each to his own, everyone has a right to their own opinion. Live and let live but is that all that it is? We didn’t know what it would shape up to be.”

Since completion of her school, Crosson has been working with many pro-life groups and faith-based groups.

“I saw over time what that darkness was in the course of my practice. I have been representing the pro-life community for almost a decade and every year there are new challenges. I also work in the area of religious freedom and I see what it has shaped up to be.”

To highlight many issues affecting the pro-life community, Crosson detailed a few of her ongoing cases.

The first was around claims against Canada Summer Jobs.

“I have filed five claims on behalf of the pro-life community, the only lawyer to file on behalf of the pro-life community. The one that is presently before the court, and if you don’t know about Canada Summer Jobs, it is a federal government jobs program that awards funding to applicant employers for summer students,” explained Crosson. “In 2018, the government came out with the attestation requirement. There had always been a very soft attestation as part of Canada Summer Jobs. Basically, it says the employer will follow the law. This one was different. This attestation requirement required the employer applicant sign their name that they attest that the job and the organization’s core mandate respect human rights, the charter and other rights. The other rights being sexual and reproductive rights and namely access to abortion. You had to attest to supporting abortion.”

Working with a Toronto-based pro-life group, she explained how she went about working on the case.

“My client at the time, Toronto Right to Life, filed a substitute attestation saying ‘we obey the law, we obey the charter, but on a basis of our conscious, we cannot say that we support abortion. Please accept this as our substitute attestation.’ What do you know, the government did not. So Toronto Right to Life went to court,” she said. “The case is still winding its way through the courts. A hearing date is not set but the first big fight we had in the case was with an intervener in the case. An intervener is a party that comes alongside by side to support submission to the court for one side or another. The intervener for the government is called Action Canada. I don’t know if you’ve heard of them but apparently, they are the Planned Parenthood arm in Canada. They filed an affidavit saying that pro-lifers mischaracterized, give false information and harass women. We fought that and filed affidavits on our side to say the opposite that pro-lifers help women and give accurate information.”

Crosson continued in saying she expected the case to get to court within the next year or so.

“We are excited to take it through to completion. A lot of people asked me ‘why did the pro-lifers file first? Why would they make a stand so quick?’ I tell people because pro-lifers are Christians with their boots on. That’s who they are, they are used to getting some flak.”

Another case she highlighted was one of Pastor David Lynn in Toronto, Ontario.

“Pastor Lynn is a street preacher in Toronto. He has been a street preacher for 22 years in the GTA (Greater Toronto Area) and for about 10 years in downtown Toronto,” she said. “Pastor Lynn, on June 4 of last year, was preaching in Toronto as part of a tour. This was, I think, the third day of the tour and the fourth stop of the day. That morning, he had made a stop where a woman had harassed him. Some people had tried to destroy his equipment, he comes to preach with a mic and speaker. He asked the police who came to the scene ‘is there something I am doing that I shouldn’t be doing? I have a right to do this, don’t I? I’m getting harassed.’ The officer said ‘of course, you had a right to do this. Unless you are breaking the law by advocating for genocide or hate speech.’”

Next, Lynn and others went to another area of Toronto and were approached by a large group of LGBTQ+2 members who were against his preaching.

“Pastor Lynn came to Gay Village in Toronto. In Gay Village, he and some of the members of his church came there, bowed their heads to pray and sang a song with a homeless, and what they believed to be an LGBTQ individual. As they looked up, they saw many people were there with signs and a rainbow flag. Signs that said ‘these are our streets, not yours’ and things to that effect. These people started protesting and hurling profanities at him. They called the females that were with him ‘whores’ and they yelled at him. He kept preaching, and what did he preach? What terrible, terrible thing did he preach? He preached John 3:16,” said Crosson. “He didn’t talk about homosexuality that day, the only thing perhaps harder thing he said was ‘I tolerate you, I accept you. Why won’t you accept me? We tolerate you, why won’t you tolerate Christians?”

Police were called and arrived on scene to dispel the crowd.

“The police came and said to Pastor Lynn ‘you’re causing a disturbance.’ Pastor Lynn said ‘no, I am not. I am preaching the gospel’,” continued Crosson.

Crosson stated they made him shut off his mic, which he agreed to do, and told officers he was going back to preach. The police then said they would charge and arrest him if he did so, but Lynn did it anyway and was arrested, according to Crosson.

“The arresting officer, by the way, is a member of the LGBTQ community. He has an insignia on his uniform and he often represents the Toronto police at such events. He said ‘I am going to arrest and charge you.’ Pastor Lynn said ‘I have a constitutional right to share my opinion and share my beliefs. If you arrest me, it will be illegal.’ Pastor Lynn knew enough to know this. He went off to preach and a few squad cars came because he is such a dangerous individual. They handcuffed him and removed him from the scene. They kept him overnight and he was charged with causing a disturbance,” added Crosson, who also stated he received an additional charge of mischief later. “Early on, the judge asked the Crown if they were going to proceed with the charges because we couldn’t see it. They said ‘yes, we certainly are.’ We are set down for trial in July in Toronto. It is quite remarkable. The first court appearance we were at, there were hundreds of pastors.”