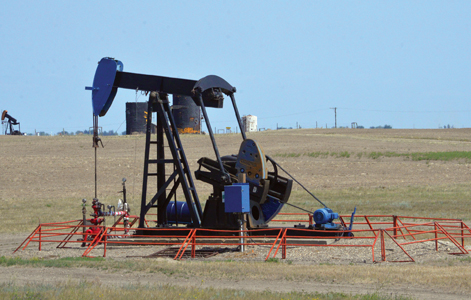 The Kenney government’s “can’t get blood from a stone” response to rural municipalities’ requests for new tax policies to address the issue of oil and gas tax laggards is less than reassuring, says Merrill Harris, Reeve of the M.D. of Taber.

“They (the province) offered a program for oil and gas producers a year ago that helped them out by a 35 per cent reduction in the educational portion of their property taxes, and then we got the credit back from the government,” he said.

“This year it’s not going to happen. I understand the legislation in Saskatchewan is such that paying property taxes is not an option like it seems to be here in this province. So the provincial government certainly can do something for municipalities by having the same sort of legislation… Our viability might come into question in the future if this continues, and for some of the smaller municipalities oil and gas taxes might well be their viability.”

Harris says in 2019, the M.D. of Taber came up $2.4 million short mainly because 15 currently producing oil and gas companies in his district were laggard on their taxes.

The Rural Municipalities Association of Alberta pegged that total shortfall number at $173 million province-wide in a communique released last month.

Harris says the Kenney government has proposed cut grant payments to his district in other areas in a effort to save money, which his local government has had to accept, but it is deeply upsetting that the government refuses to allow municipalities to enforce local taxation on oil companies by providing the necessary legislation to do so; thus creating a double-whammy situation which heavily impacts the bottom line of the M.D. of Taber.

“It is becoming a big issue for us,” he said. “It was $2.4 million in 2019, and about $2.1 of that is oil and gas-related taxation that wasn’t collected. That’s on a $20-million budget. That’s 10 per cent of your budget that’s gone. Unfortunately we have eliminated some positions and laid off 13 people. And then some of your municipal infrastructure like road graders and gravel trucks, you can’t afford to buy those to replace ones which are aging and should have been cycled out. So (those unpaid taxes) certainly do have an impact on how the municipality operates.”

Harris says he doesn’t understand if a company can afford to still be producing oil on leased land why they should be allowed to skate on their municipal taxes.

“A lot is coming at us,” he admitted, “but one thing I should point out is there is 44 oil and gas companies producing in the municipality, and they are mostly good corporate citizens. We have 15, though, that aren’t paying their taxes. Those are actively producing oil and are viable companies that are just choosing not to pay.”

The RMA has advanced the position that if an oil or gas company is laggard on its municipal taxes, it should no longer be allowed to apply for more drilling licences in Alberta.

It’s a position, Harris says, the M.D. of Taber heartily supports; especially because his district already has 4,000 abandoned wells as evidence of what results when oil and gas companies are allowed to drill despite their financial struggles.

It’s a position the Alberta Urban Municipalities Association also endorses in solidarity with the RMA and districts like the M.D. of Taber, says AUMA president Barry Morishita.

“Our goal is not to bankrupt them or make it worse for them but, at the same time, for a company to arbitrarily not pay their taxes even though they are still operating – that is a significant worry for us,” Morishita said.

“We have all been affected by the budget changes as other grants diminish,” he said. “We take a cut in 2020 on the MSI. That continues on for four more years, and then it culminates in a new framework which is even more of a cut yet to start with. There is a significant amount of financial pressure being brought to bear on all municipalities throughout the province.”

“The issue here is getting in and being treated like a partner,” Morishita added. “That is the key, and working together to come up with solutions. We all govern the same group of people. We’re elected by the same people that elect the provincial government. It’s really important for us to be working together to best use those tax dollars that are currently very stressed.”

The RMA reports unpaid taxes on oil and gas assets in the province have risen by 114 per cent since March 2019, when the total number of unpaid taxes was reported at $81 million province-wide.