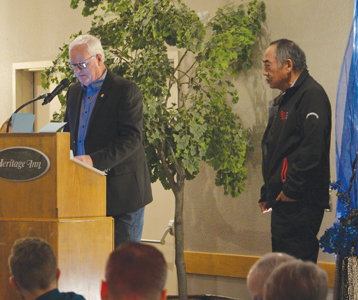 This past weekend saw the celebration of the Taber community and how several individuals and businesses have continued to put others before themselves.

Friday evening saw the Taber and District Chamber of Commerce’s Annual Dinner and Awards Night at the Heritage Inn where Saunders Insurance took home Small Business of the Year, Bruce Warkentin was named Outstanding Citizen of the Year, Taber Charity Auction earned the Spirit of Taber Award and Carm O’Grady was named Employee of the Year.

Ken Holst, president of Saunders Insurance, explained how the community has continued to be an inspiration for how their business gives back through volunteerism.

“I want to say thank you to this community. There are so many people in this community that do so many great things. It’s amazing that when you are involved in some of that, you see what goes on and you see the dedicated hours, we are really lucky in this community. That makes this more of an honour, knowing all of the things that go on. We at Saunders are so thankful for the community and all of the support they have given us.”

Warkentin spoke about how the award may be going to him but plenty of people help with giving back to the community during the year.

“You may look at my bio and think when do I have time to work? I don’t really,” said Warkentin, which elicited laughter from the audience. “The staff at MNP, anyone who knows me knows that if you work with me, I will volunteer you for lots of stuff. So we have the Bull-A-Rama, the Winter Festival, the Kids Can Catch. They are always willing to help whenever I come in with my new scheme. I couldn’t do it without you guys.”

With Taber Charity Auction taking home the Spirit of Taber award, organizers Jack French and Bob Miyanaga explained how they’ve kept the train rolling throughout the years thanks to community support.

“Our group doesn’t do this function for recognition. For years we have just gone along and done our thing, not wanting or requesting anything other than a good turnout for the auction so we could share the wealth that our community so generously donates. The opportunity to distribute the proceeds from the auction is probably one of the most satisfying things our group gets to experience,” said French. “There are many volunteers that supply many minutes, hours and months donating their time and service for their groups. Our group, for 48 weeks, probably isn’t the model for volunteer groups but for four weeks we work pretty hard to make the auction a success.”

“I’d like to thank Jack and Deb (French), they are the ones who really keep this organization going,” added Miyanaga.