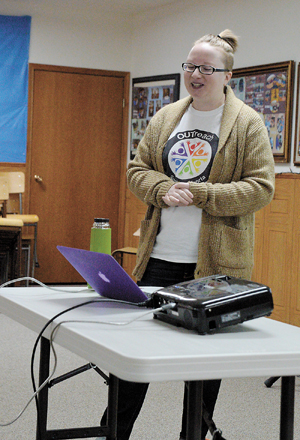 INFORMATION AGE: Tiff Semach of the OUTreach Southern Alberta Society, explained her personal coming out journey to the crowd at the Anglican Church at a Queer 101 session. TIMES PHOTO BY GREG PRICE

The following is one story as part of a multi-part series on a Queer 101 session that was held at the Anglican Church through the Taber Equality Alliance and OUTreach Southern Alberta Society.

Tiff Semach works for OUTreach Southern Alberta Society as a community education co-ordinator, and was on hand at the Taber Anglican Church last month to hold a Queer 101 information session that explored many different topics involving the LGBT2Q+ community to help bridge better understanding.

Coming out is a personal journey to members of the LGBT2Q+ community, with each person doing it at their own pace.

“Sexual orientation is a personal and dynamic characteristic. Sexuality is not something that has to stay the same. It is not something that is defined at one point in your life, and you are stuck with that term, and you can never grow and change and learn more about yourself,” said Semach. “It is something that can shift over a person’s life experience. Some folks are more aware of aware of their sexuality earlier than others. There is no right time for someone to be aware they are gay.”

Some know in middle school, others in high school or when they leave for college, or even later in life.

“There are some who are married and then they realize that this is not the life I truly want to live that represents who I am,” said Semach. “It can be folks through their entire life, maybe they are aware or they meet that person who ignited that spark, and that’s OK, there’s no one right time.”

Semach recalled her own experience in which as a sad very young child, she knew she was ’different’, she just didn’t know how.

Semach’s mom and her grandma were also very much into soap operas, be it One Life to Live or General Hospital. And once again, all the relationships she saw were man/woman relationships.

“The relationships I saw were women lusting over men. Or the man chasing after the woman. That was just what I thought was right and how I was brought up,” said Semach, who is now in her early 30s. “But entering Kindergarten, I just felt different. But starting school, I knew I was a big kid now and I need to have a boyfriend because that’s what adults did.”

Semach found herself a boyfriend, had a wonderful marriage ceremony in her Kindergarten.

“He now has a very handsome husband and so we even found ourselves at four and five years old, we knew we were just different from the other kids,” said Semach.

“My experience is something I hear amongst a lot of people that are of my generation or older. The first word I had to describe myself was faggot. It’s a slur, it’s something that is not a nice term. It’s something you would hear with racial slurs as well,” said Semach. “But, it was the only word I was hearing that described women who loved other women and men who loved other men.”

Semach was able to find more of her own community as a young teenager and find materials that were not all negative. She came out to her friends in Grade 7 and has come out to everyone since.

“I came out to my family sort of staggered, with waxing and waning with acceptability,” said Semach. “I think this is why a lot of folks in the advocacy community, we rally focus on language, so no child ever has to go through that experience again. We have the ability to communicate with each other in better ways, so there is not that pain.”

“It’s not that they are hiding or ashamed of anything. But I challenge straight people who introduce themselves and actually say ‘hi my name is So and So and I’m straight’,” said Semach. “Call into question that, if you expect that with some of our LGBTQ community. Many folks will be completely comfortable, outing themselves in their everyday lives, some folks will be out in different areas of their lives. Sometimes it’s just not relevant to certain situations. Sometimes they are out to their family and friends, but not at work. Sometimes they are at work and their friends, but not their family. We have to be really careful to make sure we don’t reveal something about an individual just because it’s information that we know. You may know your co-worker is gay, but they might not be out to their great aunt.”

Semach is out to the majority of her family, except for some who arein their 90s and grew up in southern Alberta.

“That language isn’t quite there yet. Some of them have Alzheimer’s and dementia and it’s a little more difficult to have these conversations with them. I’m really more just interested and focused on spending time with them rather than going through the emotions of explaining my sexuality to them.”

Even though Semach has done numerous presentations with OUTreach Southern Alberta Society, and has outed herself at an early age, she still finds herself having to do the process in everyday interactions.

Renovations were going on at Semach’s house with the plumber and tile guys at her residence.

“The first thing the plumber says is ‘do you want to bring your husband down so I can explain it to him.’ I said my wife is is actually at work and you’ll probably have a better chance with me because she doesn’t do any of that stuff,” said Semach with a chuckle. “And with the tile guy… ‘are you sure you really like this colour? Is your husband going to be happy with this?’ I said I made this decision and my wife is just going to have to be happy with it.”