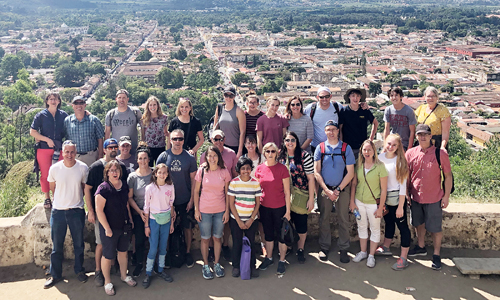 TANGO (Taber Assisting Nations through Global Outreach) continues its dance numbers across the world stage in providing medical, dental, optometry, construction and educational aid to those in dire need.

There were 42 volunteers who returned from Guatemala last month (Nov. 2-10), seeing 776 patients and providing over $300,000 in services for free to the Third-World country.

The TANGO crew visited an area in Santiago Atitlan, which is around the size of Taber that has 53,000 people crammed in it.

“They only have one tiny hospital. It’s smaller than Taber’s hospital. Their last hospital got wiped out by a landslide, so the UN helped them build a new hospital. But they have no permanent providers, they have people rotating in,” said Dr. Ryan Torrie, president of the TANGO Foundation. “It’s pretty isolated.”

The TANGO team saw hundreds of medical (334), dental (225), and optometry patients (160), with Torrie himself seeing many patients himself in four-and-a-half days.

“In two days, I saw 75 patients one day and 74 the next. There were lots of headaches, abdominal pain, diarrhea and scabies,” said Torrie, adding the TANGO team took part in 27 major surgeries and eight minor surgeries.

Dr. Torrie noted a lot of the complaints TANGO volunteers heard from patients were linked to the area’s water system.

“The arsenic levels in the lake are twice the upper limit of normal, the mercury levels are three times the upper limit of normal. They think a lot of it is washout from volcanic ash,” said Torrie. “It’s a lake at the bottom of all these volcanos. All the water from the surrounding areas off the sides of the volcanos drains off the chemical sprays from farming and everyone’s sewage ends up down there. You are drinking from it, you are bathing in it, you are washing your clothes in it.”

The area has outdated water systems that were made for hundreds of people instead of thousands. One tank takes eight hours to fill and takes four hours to empty.

“They have a water filtration system, but it takes another two hours and they don’t have time for that. So they are pumping the garbage water right into the households,” said Torrie, adding TANGO members also saw babies with extreme birth abnormalities as well, causing death, likely caused by the mercury/arsenic. “It’s bad. There’s high levels of bacteria, parasites, arsenic and mercury in the water. It’s not like you can’t go without water.”

“They said they collect taxes, but it doesn’t seem to be going back to the area,” said Torrie, adding the group may start a GoFundMe page or look to it as the focus of upcoming fundraisers. “Even though we did a lot in a week, if we could address their water system as opposed to temporary fixes like Tylenol for headaches and treating scabies. They’ll be reoccurring issues unless we can address their water system. If we can do some fundraising and help them with their water system, it would be a huge impact. That water system hasn’t been upgraded in 30 years.”

TANGO’s influence has spurned on the area’s awareness levels about its arsenic and mercury levels to the point Torrie added they are signing agreements to get blood tests going and collaboration with water testing.

The local TANGO contingent was made up of three dentists, one facial surgeon, two general surgery teams which featured eight nurses, an optometrist, a general medical doctor and lots of support staff for the sterilization of equipment and handling pharmacy, along with doing some construction projects.

“They built benches for the waiting room in the hospital and they were in code violation with privacy doors, so they built these two huge doors for the hospital,” said Torrie.

Dave Moedt has been with TANGO multiple times when they have done aid missions in Guatemala, and remembers this time around having residents be more open to longer-term education TANGO members were giving out for impacts far longer than TANGO’s short stay.

“This is a personal impression. They weren’t really that interested in us helping them improve their processes and procedures. Sort of ‘you guys do your thing and we’ll do ours’,” said Moedt, who serves as treasurer for TANGO. “This time we had three nurses who assisted us in the surgeries and I spent a couple of hours teaching them how to properly sterilize instruments. They were stuffing their autoclaves so full it wasn’t working properly. This time they were much more open to things that improved processes. They saw the long-term benefits. Their processes needed significant improvement.”

TANGO Has been in existence since 2013 and has made double-digit humanitarian missions, including four trips to Guatemala. TANGO’s overall influence has also reached Fiji, Peru, Mexico and the Philippines.

“They know our reputation. They know we are serious. Before we went, there were some fly-by-night groups trying to pull teeth just to get a picture or sitting in a Wal-Mart plastic chair. They know we have real equipment with the full-meal deal,” said Torrie. “We are hauling in air compressors and full dental units. We probably took about $100,000 worth of dental equipment down there. You should see the before and after pictures. The more trips we took there, the more co-operative they were getting because they knew we were serious. People are becoming more aware of us in the medical/charitable world.”

TANGO is in current talks to work with a group in southern California to take a cleft lip palate team to Vietnam in March to go along with some primary care that TANGO would provide for medical, dental, optometry and pharmaceutical.

For TANGO members who have made multiple humanitarian missions, it builds that appreciation of Canada that much more on how it stands on the world stage for its residents.

“When you return home from one of those trips, you are thankful of the blessings you have here,” said Moedt. “You are born into prosperity compared to a lot of other countries.”

“That also leaves a great obligation to give back where you can. They have so little. They can’t even take a drink of water out of a tap without getting sick,” added Torrie. “They are bathing in arsenic and mercury-laden water and cooking in it. It’s super sad.”

TANGO volunteers fund their own flights and accommodations in their humanitarian missions, with any money raised going directly to aid, something Torrie is extremely thankful for with a generous southern Alberta community, including Taber and Vauxhall.

“We thank the huge support of the community to make this possible. We had thousands of dollars of medication we were able to give out for free. Just the ability to go down and take our equipment and supplies,” said Torrie. “We have people who are constantly donating. Our organization, you won’t find as much bang for the buck. Dave is the treasurer and I’m the president. The entire administrative work is done at no cost. None of us take a cent and we all fly on our own dime. Every penny that is donated goes towards the work that we do.”

“If you are going on a TANGO trip, you are paying for your own flights, meals, hotels —everything,” added Moedt.

TANGO Gala is holding its major fundraiser on Feb. 29, 2020, at the Taber Community Centre Auditorium.

The next TANGO humanitarian missions include Vietnam in March 2020 and Fiji in November 2020.