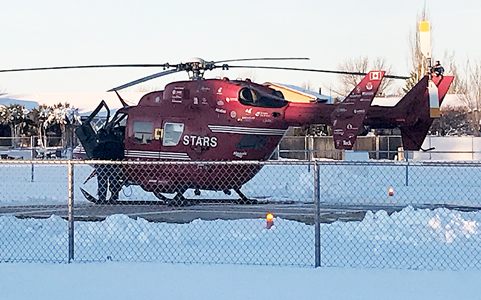 STARS Air Ambulance was deployed on the early morning of Nov. 22 to the scene of a rollover crash near Taber.

Officials say four vehicles were involved in a crash at Highway 3 and Range Road 153 at about 7 a.m. One of the vehicles in the incident ended up rolling over onto its roof.

A passenger in that vehicle, a 62-year-old man, was flown from the scene by STARS to Foothills Medical Centre in Calgary. Officials say he was in serious, but stable, condition.

The driver of the same vehicle was also hurt in the crash and was taken to hospital by ground ambulance. RCMP say one vehicle was eastbound, making a left-hand turn to head north when a westbound vehicle t-boned it.

Two other vehicles, both heading eastbound, ran into the wreckage. No one else was injured as a result.