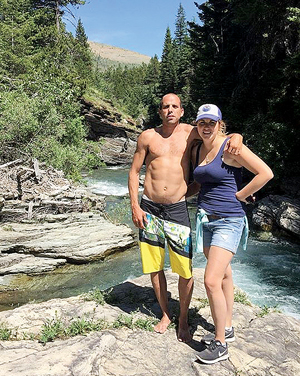 As one of approximately 4,300 Canadians suffering from cystic fibrosis, Marten DeVlieger has always been a local advocate in bringing greater awareness to the eventually fatal genetic disease.

But hearing the plight on social media of his fellows sufferers has taken that advocacy to another level in the fight to get Canadians full coverage of life-saving medicine that is out there.

“A while ago, the FDA approved a new genetic-modifying drug Trikafta. Now patients in the U.S. have access,” said DeVlieger, of the drug that is making claims of being able to extend the life of CF patients by decades. “That drug is not Health Canada approved and that company hasn’t even approached Health Canada because Health Canada approved Orkambi, Symdeko and Kalydeco which I have been fighting for to be covered. But governments like Alberta have not allowed funding, or have criteria that is unachievable. These big pharmaceutical companies are not in a hurry to get to Canada because Canadians aren’t playing ball. We as Canadians are getting left behind to a life-saving medication which is absolutely asinine.”

DeVlieger saw his fellow CF brethren’s lives improve in the United States after taking medications in question in the U.S. on social media which improved their outlook on life, and proved as inspiration for Marten to take his advocacy up a notch.

“There is hope. For the longest time I just thought I’d live out my days and fight for as long as I could until I was dead. But now there is hope, and it makes me want to fight harder to help other people have this hope,” said DeVlieger. “I don’t care if I have to call the government out, I don’t care if I have to make waves, I’m not going away. They are coming up short on this and they need to act now and step up to the plate. I should get what I need to keep healthy. Not picking and choosing who is living and dying. They are literally putting these restrictions in, knowing full well we are not going to get access to these drugs and by doing that, they are basically letting us die.”

According to Innovative Medicines Canada, between 2011-2016, Canadian jurisdictions covered as little as one third of new medicines than the median of 20 comparable Organization of Economic Cooperation and Development (OECD) countries. In the best-case scenario, Canada covered 70 per cent of available medicines. But country-wide, this figure fell to 39 per cent. For rare disease medicines, the gap was even larger: only 29 per cent were publicly reimbursed in Canada, country wide, while the OECD20 sat at 95 per cent.

DeVlieger has been diagnosed with Double Delta F508 Cystic Fibrosis. DeVlieger’s sister Karen was also afflicted with Cystic Fibrosis, before her tragic passing in September 2018 due to complication from West Nile Virus, where Marten says a healthier body from CF medications could have given her a better fighting chance for survival, and perhaps would have made it so she did not need a double lung transplant previously. Current CF approved drugs can reach hundreds of thousands of dollars in yearly costs.

DeVlieger made the lack of covered, life-saving medication for CF patients a political issue at the provincial election forum back in May at the Heritage Inn, which he also posted on social media. Marten’s father Henk was Taber-Warner MLA Grant Hunter’s campaign manager for the May 2019 election.

“As you know, I’ve been working with you on this issue and we have tried to advocate with the Alberta Health Services and the health minister and we’ve got road blocked the whole time. Now, if we are privileged to form government, it would be our approach to make sure we had a sustainable system, so that people who need it, can actually get it,” said eventually re-elected MLA Grant Hunter at the time of the election forum. “Right now, Marten can’t even get this drug. There is no insurance program, there is nothing that would allow him. He would have to move out of this province to be able to have a life-saving drug for him. Is this a good solution for Marten? Absolutely not. This is why it really bothers me when people say ‘you’re just going to privatize things.’ Why don’t we get past this overblown rhetoric and start talking about real people, like Marten, like his sister. These are real problems that we have to find real solutions for.”

DeVlieger added he has tried to make meaningful contact with health ministers from both the NDP and UCP government in successive governments and the non-action has stayed the same.

“My biggest thing is working with the government has been frustrating and you get nowhere. Canada, on a federal level, has no rare disease drug policy or plan. To get these drugs implemented, there is no formula to get it done,” said DeVlieger. “His (Grant Hunter’s) response was if we form government, we are going to make this happen. To date, I have got nothing but song and dance from Grant Hunter. Nothing happens and I got a generic letter back from Health Minister Tyler Shandro and it was the same generic letter sent to about five or six other people with the same song and dance that we got with Hoffman (previous health minister under the NDP government).”

DeVlieger acknowledges there is a complex process to ensure coverage consistency and equity for Health Canada, unfortunately, for those with rare diseases like himself where one’s body deteriorates quickly, one cannot afford to be left behind in the red tape of bureaucracy when life and death is involved.

“The frustrating part now is we are getting nowhere. Nothing has happened. The criteria hasn’t changed. We haven’t got any access,” said DeVlieger. “The frustrating part is politicians say what I want to hear, they get elected and then they do what they want. It is empty promises.”

One of the challenges associated with drugs for rare diseases is that, due to small population numbers, it is very difficult to undertake large scale, randomized clinical trials. As a result, drug review bodies have struggled to identify clinical significance due to what they deem to be data limitations.

Being such a small group, DeVlieger added CF patient concerns can be more easily sluffed off, where patients don’t have the energy to fight.

“Most people with cystic fibrosis are sick all day long and they don’t have the energy to fight the government or they don’t know where to start. That’s why I believe this is my journey now. There’s kids, 15 to 16 years old that don’t have huge amounts of damage done to their body like I have that could get on these drugs that are approved, but not covered that could change their lives,” said DeVlieger. “Because of that, they could go to college, get jobs and contribute to society. It’s so short sighted the way the government is looking at it right now. They have look at the big picture. When we approve a drug in Canada, five years later it’s still not on a drug plan or program, in the States, it happens within weeks.”

DeVlieger added because Canada has a universal health care system, that lack of CF medication coverage is not considered possible by many.

“People are unaware that this is even an issue. They all believe Canada has a universal drug plan and that is not the case for rare diseases which slip through the cracks,” said DeVlieger. “People think our health care system is far superior to the U.S., which it is to a certain degree. I don’t want to ever bash the Canadian health care system because it has been great for me and has kept me alive, but there are certain things like advances in new technology or drugs where Canada is always behind and not open for business.”