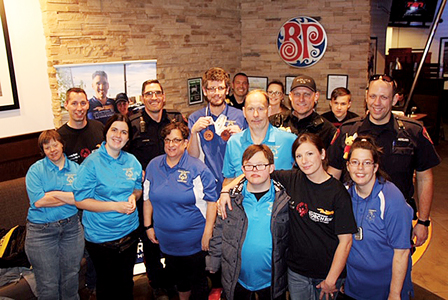 Taber Police Service helped serve up some tasty awareness about the Special Olympics, as Cops, Pops and Pizza was held for the first time at Boston Pizza in Taber on Friday.

“Cops, Pops and Pizza isn’t a new fundraising event. It’s something the Law Enforcement Torch Run has been doing for several years around North America, partnering with Boston Pizza,” said Senior Constable Mathieu Champagne. “But this is the first time it’s been done in Taber.”

“We do everything the servers do. We take orders, we serve dinner, hang out. It’s a great way for the public to interact with police officers and meet Special Olympians,” said Champagne. “There is a donation envelope that we present at the table when we present ourselves and we explain why we are there with our partnership with Special Olympics. They can donate or choose not to donate if they want to.”

“Boston Pizza also ran a promotion where if you donate anything over $15, they got a free bandera bread. We also had a merchandise table with Special Olympics and LTR gear we sold to the public,” said Champagne.

Another part of the fundraiser was Constable Braylon Hyggen of the canine unit bring his dog from Lethbridge.

“I took pledges and took a bite from the dog with a sleeve on my arm. I think we raised $350 just doing that,” said Champagne, adding around $2,000 was raised in total for the event, a fantastic amount considering what has been raised at other larger urban areas for the same event. “This is more just a public relations awareness campaign to have people learn more about the Special Olympics. To still raise that much money in one day without a bunch of lead up is impressive. Compared to the Lethbridge events, this was far more successful in terms of money raised and the amount of people who showed up. It blew me away how many officers showed up and athletes as well. I think we had between 12 to 15 athletes show up.”

Champagne has served as chairperson for the Lethbridge-area Law Enforcement Torch Run, which holds other events as well highlighting the Special Olympics, including the Polar Plunge in February. Another Cops, Pops and Pizza is being planned for a Boston Pizza on Mayor Magrath Drive in Lethbridge on Dec. 6.

The Law Enforcement Torch Run is the largest supporter of Special Olympics in the province, with the provincial ride which goes form Lethbridge to Edmonton, which happens in June.