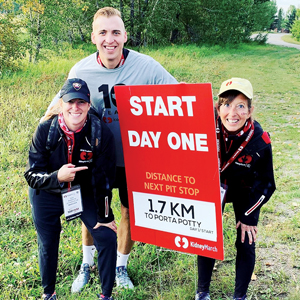 FAMILY AFFAIR: Jan Clemis has participated in the Kidney March in some capacity since its inception in 2010. TIMES PHOTO SUBMITTED BY VICKI KOERSEN

The euphoria is still lingering for the many Taberites who participated in the 2019 Kidney march that helped raise just over $1.4 million last month.

Vicki Koersen did the 100-kilometre trek that ended in Calgary as part of Team Nephronfabulous, alongside Jan Clemis, Blair Clemis, Carli and Ross Bekkering, Ben Koersen, Wilma Koersen and Gerry de boer who all either walked the distance or served as support crew.

“It was incredible. The support the Kidney Foundation gives to do the event was phenomenal. There were sponsorships for lunches, suppers, even the massage tent. This year they even had an acupuncturist which was amazing after a 30-some kilometre day. They had a yoga tent just to stretch out,” said Koersen. “There were people who had just finished doing dialysis and people who just had kidney transplants participating. Then there were people like me who just wanted to come and support those people and believe in the cause. When we talk about advancements that have been made in treatments over the course of time, advancements don’t come for free. A lot of those programs are funded through events like this and this event is the only one of its kind in the whole world, it’s huge dollars being spent to support kidney care.”

Team Nephronfabulous was able to raise over $11,000 themselves towards research and programs with the Kidney Foundation. The support systems in place for the Kidney March were very much needed.

“It was the hardest thing I have ever completed. Even though I had trained hard to do the event, I still ended up with massive blisters on my heels that I walked on. I made the whole 100 kilometres with my sister-in-law, Wilma by my side,” said Koersen, adding Koersen’s training included a 36-kilometre trek the weekend before the Kidney March. “Just like labour pains, you forget the pain when you have a few days to look back and you remember how incredible the walk was.”

That incredible journey included learning the life stories of people along the way of the 100-kilometre journey over a few days.

“Day One I met a brand-new lady to the event who has a husband who has had some kidney issues. I don’t spend a lot of time with my sister-in-law, and so being able to walk with her the following two days was pretty amazing,” said Koersen. “You learn more about the participants in the event and asking them questions like ‘why do you walk and why are you supporting this?’ You find out so many different people’s back stories and how incredible something like this is for them. We met people who had been walking all 10 years. It’s people of all shapes and sizes which was the best part. There was a group that came from B.C/Yukon and they were huge supporters. I think they sent in 20-some walkers.”

According to the Kidney March Web site, there are currently 3.5 million Canadians who have chronic kidney disease or are at risk. One in 10 Canadians have kidney disease. Eighty per cent of Canadians who are on organ donation wait lists are waiting for a kidney. That number is expected to double in 10 years. Each year in Canada, kidney failure kills as many men, women and children as breast cancer.