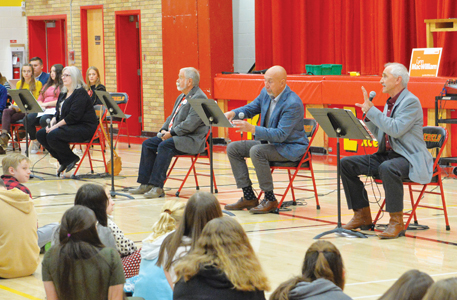 W.R. Myers High School was host to a Bow River candidates forum before the upcoming federal election and students from multiple Horizon Division schools were in attendance.

A variety of questions were fired at the candidates from students from different Horizon Division schools.

A Grade 12 student from Taber Mennonite School asked how each party planned to help students moving onto post-secondary schools.

“We will renegotiate the equalization payments. We are sending in excess of $20 million to the rest of Canada while we have a deficit of $8 billion. It’s not fair to Albertans, we are the only party that is proposing this. It is just not right that you are expected to pay this money and work on a deficit budget when Quebec gets $10 billion a year. We can easily renegotiate the terms of the agreement, there has to be equalization, it’s just a matter of how much,” responded Ikert, who also said students should look into trades.

“Let me say that most learning, takes place outside of classrooms. When I was 17 years old, I hitchhiked across Canada from Toronto to Vancouver and came back. By the time I finished university, I had 13 different jobs to pay my way through university. It was washing walls, working as a security guard, in restaurants and all of those things taught me things outside the classroom. As we do different jobs, and I hope each of you can learn as many jobs as you can because that way you will be successful in the future. We encourage entrepreneurship and we encourage industry. There is a summer temporary employment program that the government offers and it is designed to help employers see how students are performing and it helps students decide if they like to work in that space. We would strengthen and increase that so we can integrate our students and our workforce faster,” said Lipp.

The NDP is hoping to fix interest rate loans for students.

“Interest rate student loans, right now students are paying when repaying their loans, which they have to start paying six months after graduation. Right now, they are paying between four and six per cent interest on those loans. We want to get them interest-free loans, we want to cap tuitions. We also want to stop the abuse of people coming right out of university with unpaid internships. We want to ensure that new students leaving college and university are not being abused by companies by not paying for them,” explained MacWilliam.

The Conservatives meanwhile advised students to pursue the many different grants available to help fund their post-secondary schooling.

“This school district has significant opportunities for you to do some things that help you to the next step. There is tremendous opportunity for scholarships and students in Horizon School (Division) do very well in applying for and receiving scholarships. That is something you can be doing now. The other part of this is getting experiencing working in the apprentice programs. There are significant opportunities working in the trades. Look at those opportunities while you are in the school system and they may get you involved in that. The Summer Works program has been mentioned and I have a real difficult time with what the Liberals did to that. They attached an attestation and religious piece that you had to agree to,” stated Shields.

A W.R. Myers student asked the four candidates how each party would address climate change concerns.

Lipp took the discussion down a different path by focusing on the present more than looking too far ahead to the future.

“Climate change is real but how much effort or how much effect can we have on climate? In the case of the youth who, I think, suffer from a severe case of misguided altruism. They want to help the world, which is good but I think it is a bit misguided. What we need to focus on is emergency preparedness. If there was a global disaster, who cares what kind of straw you use for your milkshake? People want to save some people in the future but in fact, people are dying right now in Alberta. Did you know there is 13,000 being killed every year? Save people now rather than maybe trying to save some people in the future,” he said.

“The NDP are working towards creating economy and getting people going. I am not saying we stop with the oil and gas because it is going to take a long time to get away from fossil fuel vehicles. It will take a long time moving away from heating our homes with gas but we have to think of the future. This is a great opportunity for you guys going to university and getting into research and development. Trying to figure out how we can do this and not rely as heavily on oil and gas. It is not a renewable resource people, it will eventually go away,” she said.

Shields believes that more Canadian energy around the world will help lower carbon emissions as it would curb some of the unclean practices found in other countries.

“Number one — carbon tax, the Liberals instituted it. What we believe for the environment to be better, we develop the best oil and gas that exists in the world. The most efficient and the cleanest. If we get our natural gas to tidewater, we get it to China. If we get clean energy to China with natural gas, they don’t need to open more coal mines which reduces the polluting coal mine they have. We have got the best gas in the world and the world needs our natural gas,” he explained.

“When I was in high school, we had the same concerns. There was doom and gloom predictions out there, and there was a guy called Paul Ehrlich. He wrote a book called The Population Bomb. He said by the year 2000, everyone would be starving to death. What these people don’t take into consideration is how adaptable and how intelligent human beings are. When you see these people out there telling you the world is going to end in 12 years, don’t believe them. They are selling something. You have the information out there to find out what they are trying to sell you. They want you to live with more rules from another organization. They don’t want you and your fellow Canadians to decide how to live your lives,” he said.

Another question brought forward was around health care and wait times in hospitals.

“I’m very passionate about health care and I feel it is something we have to expand and continue. I also feel for wait times, we need to get more doctors so we don’t have people coming into an emergency. We need more doctors in our communities. We will work with provinces to figure out how to reduce these wait times,” responded MacWilliam.

The Conservatives are planning to direct some more money towards provinces to help with the issues.

“Although health is under the constitution and a provincial matter, what (Andrew Scheer) said was we would have $1.5 million directed to provinces so they could buy new and replace those very valuable scanning equipment. That allows them to spend on other needs within the health care system. There is another piece to it. It has to do with the drugs that are used with very rare diseases, cystic fibrosis would be one of those. You may be able to get that drug for a rare disease in Quebec but not Alberta. (Scheer) said ‘I need to sit down with the premiers and we need to have equitable distribution of drugs, particularly for rare diseases that are very expensive,’” said Shields.

Ikert and the PPC are also planning to provide some financial relief to health care in the provinces.

“The PPC program for health care is going to take the GST, which is about $40 billion a year, we will divide it amongst the provinces and they will know every year how much money they will get. From that point on, it will be up to the provinces to figure out how to pay for their health care and to innovate. There will have to be changes made, we can’t afford to continue spend money on health care. We are broke and our province spends about 50 per cent of our budget on health care right now.”

Lipp focused on a more preventive approach to health care in Canada.

“What the Christian Heritage Party wants is to refocus on is prevention rather than a cure. There are places in the world where doctors are paid more when their patients come to them less frequently. We have this whole things backwards. We are spending way too much on the wrong end of things. We need to a lot more teaching, educating and training on preventative health care rather than at the other end. Lately, this gender reassignment surgery is not health care, that is elective surgery. Lately, our country has got the gender confusion movement, we are going off into the twilight zone of what is right anymore.”