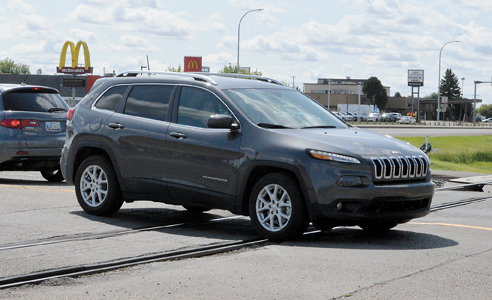 The replacement of a rough rail crossing at Highway 3 and 50th Street which has been the focus of complaints from local drivers should be getting underway next week following a two-year delay by Canadian Pacific Railway.

Postponed since July 2017, in August a spokesperson for the CPR confirmed the project was expected to be completed before the end of the construction season. CP recently inspected the crossings at 50th Street and 51st Street and concluded a full crossing rehab is required to keep both in compliance with Transport Canada standards.

“CPR assessed both railway crossings — 50th Street is in dire need of replacement, they’ve agreed to do that,” said public works director Gary Scherer at town council’s Sept. 23 meeting. “That is at their cost — because that is on a grid line system, that is an original road — whereas 51st Street is the town’s crossing, they are the ones who recommended ‘we want this crossing.’ That is the same as it would be behind the police station, that is the town’s crossing (Barton Drive and Highway 3). Highway 36 and Highway 864, that’s all CP Rail.”

Under the federal Rail Safety Act and Grade Crossing Regulations, CP must ensure all level crossings in the town’s network are in good repair and in compliance with current design and maintenance standards.

Costs for crossing maintenance in Canada are apportioned by government order. For 50th Street, R Order 1967-R-732 applies and there is no cost to the town.

“So that’s why the cost is associated to the town,” said Scherer. “You can see by the agreement that’s all the town’s cost, as agreed to in 1967-1968. So this crossing has been in there for over 50 years.”

Public Works staff monitored the 51st Street crossing for four consecutive days and recorded the volume of traffic crossings in both north and south directions. On average there was 1,056 vehicles in an eight hour period. Alberta Transportation traffic counts for 50th Street are an average daily count of 5,580.

“When we found about this, we started doing some traffic assessments, traffic counts,” said Scherer. “In an eight hour period, there was about 1,000 vehicles go through, so it is well used. Pedestrians use it. We decided you could close it, that’s another option. That would put more pressure on 50th Street, there would be about another 2,000 vehicles a day there, so you’d be looking at 7,500 rather than 5,500. We actually like the idea of keeping it open, because it would relieve a lot of pressure on 50th Street. It’s a good crossing, people use it every day.”

If council believed the 51st Street crossing was no longer needed and was unwilling to pay their portion of the costs, CP’s Public Works team would work with the town to close the crossing. As part of Transport Canada’s Rail Safety Improvement Program, Transport Canada offers a $25,000 grant for public crossings taken out of service.

“Really, whatever CP Rail says we just have to agree with. I think it’s a good crossing, and I think we need it,” said Coun. Jack Brewin. “But I think it would be a great crossing if it went right through, but that’s the Department of Transportation, another department. But it’s something I think we definitely have to do.”

Coun. Louie Tams also concluded closing the 51st Street crossing was not a feasible option for the town and its residents.

“I totally agree, because I think if you don’t keep 51st open, 50th is going to be really, really tough.”

Coun. Garth Bekkering zeroed in on the cost factor that was proposed by CPR.

“I’m not a railroad guy,” replied Scherer. “They gave a list of what they’re doing, and the costs on that list, how they determine that is all up to them. We don’t have any say in what’s done, or the cost of that.”

Bekkering argued the CPR’s bill for the work appears to be exorbitant.

“It seems to me if they’re doing both crossings simultaneously, aren’t there cost efficiencies? I’m just an amateur at this, but it makes no sense to me. One hundred and thirty-three thousand bucks? You can build a house for that.”

Tams seemed less concerned about cost and more interested in finally getting the work underway on both rail crossings.

“It looks, though, Mr. Mayor, that the crossing that they have laid in there and they’re prepared to do, they’re finally putting in a proper concrete crossing that has been needed in this town since forever. So seeing that they’re putting a proper one in, it’s going to make our life a whole lot better, especially at this 50th Street crossing. It’s so overdue.”

Following discussion, council voted unanimously (6-0) to support the CPR in their project repairs for both the 50th Street crossing (at no cost to the town) and the 51st Street crossing at a cost of $133,607.10; with funds to be allocated from capital reserves. Coun. Joe Strojwas was absent from the meeting.

Canadian Pacific plans to start construction at both rail crossings by Oct. 9.