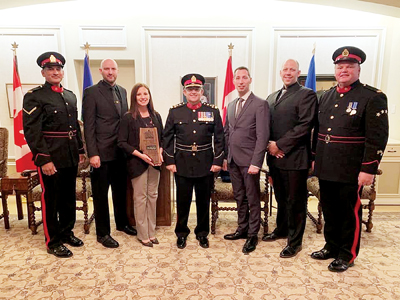 CHOSEN: Taber Police Service and its auxiliary constables were beaming with pride in Edmonton after winning a Community Justice Award for their Auxiliary Policing Program. TIMES PHOTO SUBMITTED

The committee has spoken and the Taber Police Service Auxiliary Policing Program has received an Alberta Community Justice Award, recognizing its work to improve safety in the community.

The Auxiliary Policing Program has been around since the mid-1980s. it is a flagship community policing program, in which members of the community come and volunteer their time with the Taber Police Service after receiving training, going through physical assessments and getting their designation through the province.

“They work in conjunction with our police officers as auxiliary police. They do have authority under the Criminal Code and enforce provincial statutes, as long as they are with a regular member of the police service,” said Graham Abela, chief of the Taber Police Service. “They are an extra set of eyes and ears that are out there that assist in our policing duties while we are out there on patrol. But, it’s much more than that. The auxiliary program is also a way police can collaborate with community and build relationships within community in order to assist us in our role in providing public safety. In my view, there is not a better program that is out there than the auxiliary policing model. It has been a real boon to our organization.”

According to Abela, community policing is based off of Sir Robert Peel’s nine principles of policing, in which the auxiliary program helps fulfill them in Principle 6 where ‘police, at all times, should maintain a relationship with the public that gives reality to the historic tradition that the police are the public and the public are the police; the police being only members of the public who are paid to give full-time attention to duties which are incumbent on every citizen in the interests of community welfare and existence.’

“For Peel’s principles to properly work, the public has to take on a role of responsibility within policing that police officers that are paid usually do,” said Abela. “That portion in my view of Peel’s principles is sometimes lacking in modern day, democratic societies.”

Some members from the past with the Auxiliary Policing Program have become actual police officers, including with the Taber Police Service. Chief Abela himself was an auxiliary constable back in 1989.

“Also, many of our auxiliary constables have gone on to work with other police agencies, including the RCMP and Lethbridge Police Service,” said Abela, adding others have simply been professionals in other fields wanting to help out their community with community service. “Our initial purpose is not to sign people up as auxiliary constables to create police officers. Our original purpose is to have volunteers from the community get involved with the police, build relationships, build trust, confidence and respect and some legitimacy to the organization. It allows people to see what it is like within an organization.”

That inside look Abela noted gives civilians a greater appreciation of what local policing is really like, adding some times people are quick to judge police actions without the proper context.

“People are armchair quarterbacking through social media and short video clips of police activities that are later spread around the Internet with the ability to be keyboard warriors in relation to the activities they see, not taking into account the totality of events or the complex situation,” said Abela. “For the context police find themselves, there’s nothing better than having a member of the community who is not a police officer, be the eyes and witness to the activities of police who can stand up and say police are accountable, they are professional, and the rumour mill that you hear and see for the most part do not occur. This program provides us some of that.”

Taber Police Service currently has five auxiliary constables, and the program has seen both males and females go through its doors.

“They volunteer their time around a shift a week. It’s mostly evening shifts and on the weekend. It’s when we are busiest is when the auxiliary police like to be out,” said Abela, adding there were over 650 hours worth of volunteer time put into the program in 2018. “It’s the more exciting times when people can get their mojo going.”

Members of the Taber Police Service and the Auxiliary Policing Program were on hand in Edmonton to receive the award from MLA Mickey Amery, deputy commissioner Curtis Zablocki and honour guards from the RCMP in the ceremony.

“It was a very proud moment, I can tell you as chief,” said Abela.