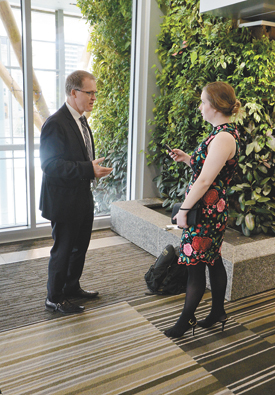 Alberta’s libraries are concerned about the security of their provincial funding after a freeze was issued earlier this month, but Taber-Warner MLA Grant Hunter criticized the opposition for “fear mongering” in the wake of a decision he views as routine business for a new government.

“The reality is that this is just a bold-faced lie, meant to do some fear mongering, to do anything they can to capture the limelight. The truth is that we passed an interim supply bill which is for six months, so when they say we’re cutting it 50 per cent, that’s not true and they know it. They’ve been in government, they’ve been in opposition, they’re well aware of how the process works. An interim supply bill provides funding until we can get our budget put together in October. So this is why they say 50 per cent for all the province for all areas for public libraries.”

According to government officials, libraries will receive half of the regular funding they were promised by the end of August, and while the remaining 50 per cent has not been officially cut there are currently no guarantees they will receive all of the previously-allocated funding in the upcoming provincial budget in October.

Hunter, who also serves as associate minister of Red Tape Reduction, attacked media over the issue for spreading “lies” about the realities of formulating interim supply bills for new governments in an election year.

“That funding has not been cut at all. That funding is still the same, it’s just an interim supply bill to fund them for the next six months, for a half year. So this is very disingenuous, and it’s difficult to be able to continue to listen to them and to have the media perpetuate these kinds of lies. It’s very disconcerting. The media knows, too — most especially the guys who are up in Edmonton. These guys all know, and have watched many years of interim supply bills come together, and for them to perpetuate this is very, very disconcerting.”

In a similar move in 2015, the new NDP government withheld 25 per cent of funding from libraries through their own interim supply bill, but this funding was later restored in early September.

Premier Jason Kenney issued a statement confirming library funding has not been officially cut but is being partially withheld in the interim supply bill with the remaining six months of the fiscal year to be finalized in October.

Misinformed journalism — or reporters with a political axe to grind — are involved in perpetuating these kinds of communications challenges for the government, according to Hunter.

“Investigative reporting is getting both sides. Unfortunately what we see far too often is when they present just the NDP side. Which is spin, designed specifically to get people upset, get their heart rates going, whereas an investigative reporter will say okay, let’s take a look at what was said, to give the premier’s office a call, or give the minister a call — then you’re going to be able to show both sides, and then you’ll say ‘Oh, there’s nothing to it.’ But instead they’re trying to capture the spotlight, getting people upset, it’s not helping at all. They’ve got lots of fish to fry, and they’ve got probably lots of stuff that they can come after us on, but when they come out and just make up stuff like that, it’s so sad to see.”

While understanding of the financial challenges facing the provincial government, Taber Public Library manager Heather Martin-Detka is hopeful the UCP won’t choose to short change libraries in the budget.

“We were made aware previously — before the media was made aware — that this is happening. So of course it’s never fun to see that you’re not getting 100 per cent of your grant, but we also understand that this happens every time there’s a switchover in government, they want to just double-check all of their financing, and just following what other libraries have said and understanding that’s how things are — we’re really hoping to see that other 50 per cent come through.”

Mayor Andrew Prokop suggested residents will know more about the library funding freeze and if potential cuts are in the offing when the province tables a budget in October.

“That is their mandate right now with the overall deficit, to balance the budget over the four year span. They have a lot of work ahead of them to make that happen so I think they are just in the process of researching and coming together to form a proper plan on how they are going to make that happen. I guess they have to to start somewhere and I believe we will have more information come September-October once they have reviewed everything.”

“It’s a good chunk of change, and I also understand were that not to go through, we’ve got to make up that difference,” said Martin-Detka. “So we were hoping for the same this year.”

In recent decades, most libraries have revolutionized their image from traditional stacks of well-worn wood pulp into hubs for electronic understanding, and are still playing a vital role in many small communities throughout the province.

“Oh my goodness yes,” said Martin-Detka. “Normally we get kind of a quiet time during planting, when spring has done it’s thing and the farmers are out in the field. We did not have that quiet time this year, and in fact this last month of July was twice as busy with front desk interactions — people asking questions, or in-house use — we were twice as busy last month as we were last year in July. I think we are (a vital institution) — it goes back to that idea if you think that libraries are just a repository for books, you wouldn’t see people coming in to use the A/C. Even last week (July 29 – Aug. 2) when we had that heat wave, we were a place that people could just come in out of the heat, the same thing in the winter, coming out of the cold. Libraries are more than just books, you can use the computers, people are applying for jobs, connecting with family and friends — we fulfill so many different needs, and I do believe we’re extremely important in rural communities.”