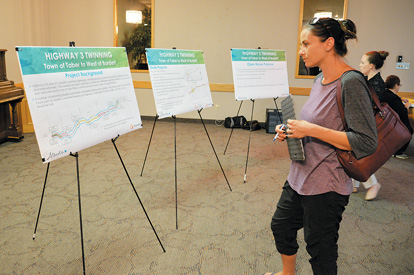 The Highway 3 Twinning Development Association is hoping the needle moves in a positive direction with the UCP provincial government in what is seen as something that is long overdue for the crucial corridor to overall economic development.

With all the economic development factors on the table, there is also the one involving safety.

That again came into focus in the recent tragic death of a teenager from a fiery crash between two vehicles that happened at Range Road 16-1 on Highway 3, three kilometres east of Taber, earlier this month.

“In light of the most recent fatality just east of Taber, our thoughts and prayers are with the families involved,” said Bill Chapman, president of the Highway 3 Twinning Development Association. “It’s not something we want to talk about, but it does come to mind that this is one of many incidents that have occurred on Highway 3 over the years. There are ways to improve on the safety component and twinning Highway 3 is one of them. Heavy transport and automobile traffic is really setting up a dangerous precedent and it’s increasingly dangerous as we continue to grow in this part of the province. I hear from so many people who are traveling east and west on Highway 3 in both directions.”

With the growing economy in the southern Alberta region, Chapman pointed out the recent expansion of Cavendish Farms just down the road in Lethbridge.

“That’s one of the best examples of big growth, whereby we will expect about 7,000 truckloads a year to enter and exit out of Cavendish. You multiply that by all the other businesses along the way including McCain’s, Lamb Weston, and of course there’s a new fertilizer plant that is going up by Rowland Seeds out between Burdett and Grassy Lake,” said Chapman. “It’s exciting to see that growth and we feel it’s a critical time for this government to be involved and inject capital money into this project.”

There was a report released by the University of Lethbridge on the economic and cost benefit analysis of twinning Highway 3.

“It showed that for ever dollar that would be invested into a Highway 3 twinning project, that there would be a three-dollar return in economic spin-offs along the corridor,” said Chapman. “We really want to be put on a priority list with this government where Highway 3 needs to become the greatest priority. We are literally an agricultural pipeline from border to border.”

Traffic counts have been the barometer of the past on which infrastructure projects get priority in the last number of successive provincial governments, but the Highway 3 Twinning Development Association sees it much differently.

“The traffic counts are there now, but also the economic impact of efficiency of travel, for environmental reasons and efficiencies in fuel costs, and travel times that would improve with twinning,” said Chapman. “We are requesting that this government fund areas that might already be tender ready, and maybe a short stretch between Taber and Seven Persons or Bow Island, or between Fort Macleod and Pincher Creek.”

While a whole dream scenario of having the Highway 3 corridor in question twinned completely may be a vision that is decades in the making on the way to its full realization, Chapman notes the time is now where certain parts of the corridor could be addressed immediately.

“In Fort Macleod, they are already approving a project which would be a bit of a bypass around the town of Fort Macleod that’s already tender ready,” said Chapman. “Examples like that we feel this government might have some appetite to invest in some stretches that might be ready. It’s not like we have to do the whole thing at once. Even for this next budget season, if there was a priority list that this government could focus on, that the Highway 3 Twinning Development Association would be happy to see any type of activity.”

Chapman has heard concerns from some small-town residents that bypassing their communities could turn some areas into ghost towns, where Chapman added the numbers don’t add up to match those concerns.

“Some communities feel like they are going to suffer, but you take a look at the town of Coaldale. We have been bypassed already once in the early 80s, and it’s grown. You look at the Village of Barnwell, and the growth that is happening in Barnwell. You look at other cities where there is a bypass or a ring road, it has not affected at all any type of appearances of those towns,” said Chapman. “Most people would discover a four-lane highway actually stimulates more interest in destinations for recreation, camping and tourism and for transport services for goods and services.”

Any advancement the Highway 3 Twinning Development Association could see in terms of funding from the provincial and federal governments for the purpose of twinning any part of Highway 3 from the British Columbia border to Medicine Hat at the earliest possible date would be considered a victory.

“It doesn’t matter where any construction starts taking place, but just that something starts to happen,” said Chapman. “The association wants to make sure we are targeting the right reasons for twinning. This is not just about what was in the past, but moving forward, we have identified through real key measurable reasons why Highway 3 should be twinned and for that construction to happen. Sooner is better getting on a priority list.”