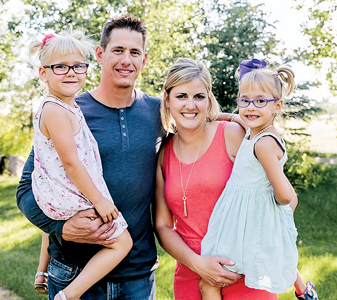 LIFE REMEMBERED: Karen Hamilton, who passed away from West Nile Virus last year, had her loving husband Brent and daughters Emma and Lily get to see a laboratory named after Karen. TIMES PHOTO SUBMITTED

As the Ex Vivo Organ Perfusion Research Laboratory was renamed in Taberite Karen Hamilton’s memory earlier this summer, Karen’s legacy of advocacy has brought to the forefront once again the importance of organ donation.

As a town councillor, Jack Brewin’s plight in trying to find a new liver due to an autoimmune hepatitis disease made local, provincial and national news. While angels are now looking after Hamilton, who succumbed to West Nile Virus last year due to her suppressed immune system from being an organ recipient, Brewin always referred to Hamilton as one of his Guardian Angels in a very supportive community when his liver started to fail him.

Brewin admitted as the days/months passed he was getting down on himself and losing hope that he would find a match, when his spirits were lifted in the form of Sharla Kane and Hamilton, who herself was a recipient of a double-lung transplant stemming from her cystic fibrosis. The two along with a small contingent of Taberites launched a live donor awareness campaign on Facebook ‘Find a liver for Jack’. Brewin would eventually find a living donor match in Taberite Andy Tams.

“Karen was a very kind person, and when I got sick she was right there telling me not to give up. There’s hope, and I got strength from her. She was a very strong person and an advocate,” said Brewin. “After my surgery and doing my recovery, she was telling me the importance of staying in shape to help the recovery. She’d give me heck if she saw me eating something I shouldn’t be,” continued Brewin with a chuckle.

Having some good heart-to-heart conversations together, both knew the blessings they received in getting a second chance at life through organ donation.

“This is all about the donors. We get a lot of attention being known in the community of a small town and being recipients, but the attention should be to the people who donate,” said Brewin. “They (donors) sort of go unheard, but they are the heroes. I’m just fortunate I had a match.”

You hear of the names Brewin, Clemis, Hamilton, Giroux et cetera locally when it comes to success stories with organ donation, but the town councillor added it just scratches the surface of how many lives in town have been touched by those who have signed their organ donor card or have been a live donor.

“Thousands of people have signed (their donor cards) because of Karen. Karen’s life helped so many people. We had a booth set up at Cornfest and some other places in town and we easily got about 400 people signed up,” said Brewin. “The people down at the licence registry are promoting it a lot also which I think is great. People would be surprised at how many organ recipients there are actually in Taber. Kidneys, hearts, lungs —there are so many lives in this town that have been touched by organ donation.”

One of those famously touched by organ donation was Paul Marcel Giroux who passed away in January 2015, but not before being the longest living heart transplant recipient in the province, along with a donated kidney from his daughter 14 years ago. Giroux’s daughter Steph became a big organ donor card advocate in recent years, inspired by the words her late father would give to the Edmonton Journal upon learning he got his new heart courtesy of an 18-year-old donor…“I was saved by a young man, I promise I will make my life good for him.”

“There have been a ton of people in this town where organ donation has touched their life. Right from the beginning is when I will usually hear about it. They will message me or text me asking questions about what to do and where to go,” said Steph Giroux-Feininger. “That’s happened to me for years and years and years. They are questions that need answers like… ‘How long are you off of work for? What happens? Is there funding?’ When you are in a small community, you really see that outpouring of support. The support you get the whole time going into it and the time afterwards, too, is huge. Like if you have kids, who is watching the kids? There are people not working, there’s much more to think about than just the health. When you live in a small town, these things are more attainable when people know each other and help each other.”

Huge numbers of Taberites have already signed their organ donor cards and with the awareness that has been created, many more can still be signed.

“There are an awful lot of people who have signed their donor card, but even if I did it next week, I bet I could get 50 more,” said Giroux-Feininger, marveling at the bravery of her sister who donated a kidney to her father. “It’s not as scary as it used to be before because of people that have come before going through the process. I didn’t even sign my card until about 10 years ago, because I was afraid.”

While plenty of progress has been made locally in town for organ donation, Canada still has a ways to go as a nation.

Over 1,600 Canadians are added to organ wait lists yearly.

A 90 per cent majority of Canadians support organ and tissue donation but less than 20 per cent have made plans to donate.

At 20.9 donors per million people, Canada’s donation rate is below many other countries including Spain (43.4), the United States (31) and the United Kingdom (21.4).

Only one per cent of deaths in hospitals end up becoming actual organ donors. One organ donor can save up to eight lives and a tissue donor can benefit up to 75 individuals.