Southern Albertans to be focus of violence study 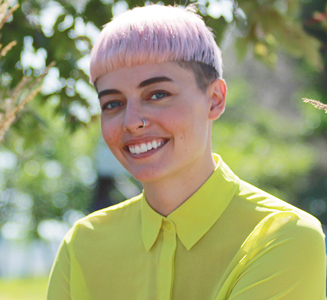 Southern Albertans will be the focus of a new study examining violence in non-traditional relationships. Jaisie Walker, a University of Lethbridge graduate student in the Department of Women & Gender Studies, will use PhotoVoice technology to explore concerns about violence among people in queer or nonmonogamous contexts.

A graduate research grant from the Parkland Institute will support the project, “Unsettling Lateral Violence: Queer Genealogies of Non-Monogamy in Southern Alberta.”

Walker says the study will utilize a “participatory-action” research approach. It will ask 15 participants to photographically document “community assets” and concerns around violence, safety and accountability, and then critically discuss the resulting images.

That could lead to calls for change directed to policy-makers, educators and program developers, expressed through a participant-led public exhibit.

“It’s exciting because this particular topic crosses over critical rural studies, feminist geographies, queer theory, anti-violence literature, gender studies, art — you can make this applicable in so many different kinds of fields.”

Walker, born in England and raised in Scotland before moving to Canada following high school, has worked on the front lines of anti-violence programming and seen how the queer and nonmonogamous communities are not well served by current policies on interpersonal violence.

“What I continuously saw was that the literature these programs were relying on for their anti-violence programming still framed relationships in a heterosexual and monogamous lens and it continuously relies on this narrative of a victim-perpetrator model,” said Walker, who has worked for the U of L’s Campus Women’s Centre and the Safe Haven Women’s Shelter Society in Taber.

While the justice system still has its place in dealing with situations of interpersonal violence, Walker says most incidents occur between people who have established loving, trusting relationships. Criminal charges are not always a desirable outcome.

“When it comes to the queer community, for example, people don’t want to just rely on punitive justice frameworks,” said Walker. “When they are thinking about their relationships, they want to build sustainable new ways of doing things.”

Trevor Harrison, a U of L sociologist and director of the Parkland Institute, says Walker’s project is an excellent example of the breadth of research U of L students are involved in at the graduate level.

The project gained approval from Parkland Institute adjudicators for presenting a “well-prepared application with clear relevance to the communities of interest, and public policy applications.” The adjudicators also made note of the interdisciplinary nature of the project as it touches several fields of work while connecting to rural policy and governance issues.

“Parkland supports research that pushes the boundaries of so-called common-sense understandings of the world, opening up instead avenues for greater dialogue,” Harrison said. “Despite some legal gains in recent years, the LGBTQA2S+ community still faces many challenges, as Jaisie’s project highlights.”

Walker’s submission “was clear, well articulated, and frankly exciting. We look forward to the results of their research.”