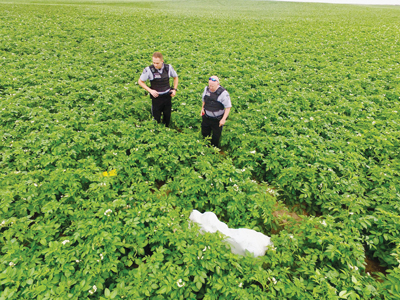 Municipal District of Taber community peace officers got a bit of a surprise early last week when an off-path weather balloon touched down in the municipality.

Hailing from Stanford University in California, the weather balloon was en route to eastern Canada when it had to make a crash landing in the M.D. on July 2.

“We got a phone call on Tuesday night from Stanford University, a woman by the name of Paige Brown. She said ‘this is going to sound strange but we have a weather balloon travelling between California past Alberta. It is designed to collect information and is very expensive and part of a trial program,’” explained Kirk Hughes, director of community safety and CPO sergeant. “I asked if there was anything inside of it that I should be worried about. Is there any radioactive material or combustible materials and she said no.”

The balloon had GPS coordinates and was battery operated with a helium balloon and a deployable parachute. The CPOs responded later that night but were unsuccessful in locating the balloon.

“(CPO Dana) Butler and I drove out there on Tuesday around 5:30 p.m. We go looking for it and of course, two short guys trying to find something in a field. We can’t find nothing, we look around, we look at the GPS coordinates and nothing,” said Hughes.

With only a rough estimate of where the balloon would be located, the CPOs with help used a drone to quickly locate the crash site.

“The next day, we had Greg Schneider from the Taber Police who is a big drone guy (pilot the drone),” stated Hughes. “He walked Butler and (CPO Henry) Peters through the field to find the balloon and they walked it back out.”

Since the program’s inception, they have received quite a variety of calls, but Hughes says this takes the cake.

“This is by far the strangest (call) we have received simply because of the uniqueness of the call itself,” said Hughes. “You don’t get a chance to chase down weather balloons very often, certainly from California.”