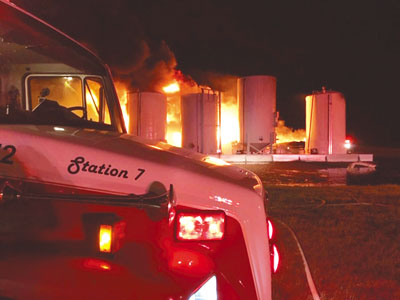 ACTIVE DUTY: Due to a lightning strike last week, M.D. of Taber Regional Fire Services had to send 28 firefighters to the incident. TIMES PHOTO SUBMITTED BY DERRICK KRIZSAN

Upon arrival at the scene it was determined that the fire was in fact a full-scale oil storage site. The duty officer immediately requested a second and a third alarm to Station 2 (Grassy Lake) and Station 5 (Vauxhall) as well as water trucks from four water haulers including the M.D. of Taber.

Station 2 Engine 2-2, Station 5 Engines 5-2, Engine 5-3 and Wildland 5-5 responded with the second and third alarms. The large water capacity of the Station 2 and Station 5 rural fire trucks came in very handy.

AHS EMS responded to provide on scene medical screening to the firefighters.

The M.D. of Taber director of emergency management was on scene through the entire event – no member of the public was in danger at any time.

At the peak of the event there were 28 M.D. of Taber Regional Fire Service Firefighters on scene.

While on scene there were two explosions within the complex which was heavily engulfed in the very large fire.

A total of 22 water tender truck loads were used to extinguish the fire along with 40-plus containers of AFFF foam suppressant.

Much of the facility was saved due to the aggressive fire fighting tactics utilized by the well trained and experienced M.D. of Taber Regional Fire Service.