Meier making most of second chance 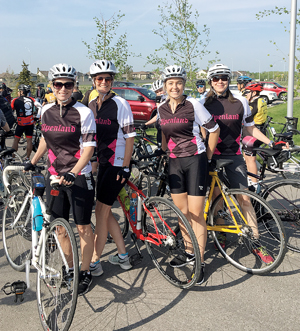 TEAM SUPREME: Members of Team Leah have been training vigourously for the upcoming Ride to Conquer Cancer later this summer. TIMES PHOTO SUBMITTED BY LEAH MEIER

With every challenge Leah Meier has faced in her life, she has tackled it with a meticulous attention to detail, in a step-by-step basis.

The biggest challenge Meier has faced in her life came on June 19, 2018, when she heard three words no one wants to hear…’you have cancer.’

Meier was diagnosed with Stage 4 Colorectal cancer, with metastasis to her liver, and possibly her lungs.

Now, with the diagnosis of being cancer free after several rounds of intensive chemotherapy, Meier is showing her appreciation by embarking on The Enbridge Ride to Conquer Cancer, along with seven other teammates, which goes Aug. 17-18. Meier had a follow up MRI and CT scan late last month that both came out clear.

The team goal is to raise $20,000, although each member is supposed to raise a minimum of $2,500 each to participate. Each person will bike 200 kilometres, from Calgary to Sundre and back again the next day.

“It is one of Alberta Cancer Foundation’s major fundraisers. They’ve raised $75 million since 2009, with all those funds staying in Alberta. It’s gone to research, but just as important, it’s gone to the facilities in Alberta,” said Meier.

There are 17 cancer centres in Alberta, compared to just two in Saskatchewan, making the treatment options for people closer to home that much more accessible.

“I had 12 rounds of chemo and surgery. My chemo, I was able to do it in Lethbridge. In the past, I would have to travel to Calgary,” said Meier. “Physically, it’s really difficult sometimes to be in a vehicle, after chemo and you’re not feeling well. Follow-up appointments, you can do that all in Lethbridge now, largely due to fundraisers like The Ride to Conquer Cancer. There is also the cost, it’s expensive to be sick. Anytime you have to travel for any of these appointments a long distance, it costs you money. It’s gas, it’s one lunch, it’s hotels.”

Inspired by how much impact the fundraiser has had not only on her own life, but many more around the province, Meier was immediately on board shortly after she cleared the hurdle of her last treatment. After her fifth round of chemotherapy, Meier had another MRI, and found the good news that the spots on her lungs were cysts and the remaining liver metastases had shrunk considerably.

“Having surgery in November, four weeks later, I was back on six more rounds of chemo. I finished chemo on Feb. 20, and I started training for this ride on March 4. My first training was on a stationary bike that was lent to me by a friend. I did five minutes and 2.1 kilometres,” said Meier.

Continually pushing forward has been Meier’s motto since she was first diagnosed to now, where she has been training religiously for the upcoming biking fundraiser for cancer.

“It’s really hard to explain to people (going through cancer treatment) what it is like. There were seriously times I would think to myself, get through this second. This second will turn into a minute and this minute will turn into an hour which turns into days,” said Meier. “Sometimes, it feels like you are getting dunked under water and then you get pulled up, you get a chance to breath, and then you are put back down again. I understand the process of taking things one day at a time, biting off a little bit. It’s amazing how far you can come with that approach.”

Meier has been gaining in strength, training for long periods, and when she has been able to get outside to ride her bike, travel farther distances. Four months ago, Meier barely had the strength to climb a flight of stairs and admitted, some days she was on the couch for 23 1/2 hours out of the day, where now, she recently finished a 53-kilometre ride.

Leah’s brother promised to fly her out to Phoenix as a celebratory gift after she finished her treatments, as a way to relax, and gain strength without any distractions.

“In April, I went to Phoenix for 2 1/2 weeks. I walked, I swam, I did some hiking. I did a little bit of road biking,” said Meier. “I came back stronger, and it gave me that little bit of 2 1/2 weeks of training outside that I wouldn’t have got here because of the weather.”

Tracking her progress, Meier is not looking at The Ride to Conquer Cancer as having to do 200 kilometres in two days, or 100 kilometres in one day. It will be taking it one kilometre at a time, just like the small increments she saw in her road to recovery from cancer. With all the things that have touched Meier’s life, it is wisdom Meier has embraced with any passion she has had in her life.

“I’ve been prone to taking on challenges. Going through treatment, preparing for this ride, I realized I’ve practised this. Through theatre, through directing plays, through being a music director, having big goals and knowing it takes tiny little steps to get there,” said Meier. “Planning a show, you don’t know how opening night is going to look. You just know you have to look at Scene One, these three pages and move forward from there. I’m a very methodical person.”

Meier added, as she has got stronger in her training, Taber’s Trout Pond has been a Godsend both during and post chemo treatments.

“It has been therapeutic. I’d walk that, it’s about 2.5 kilometres. As soon as I could get off the couch, I was walking the Trout Pond and I had friends and family walk it with me. Now I have moved from walking it to biking it,” said Meier. “I keep upping it and making it harder and longer. My brother who is very active, gave me the best piece of advice. He said it’s really simple training for this — ‘ride your bike.’ That’s it. It’s not rocket science, just ride your bike and get stronger every day.”

Meier noted there are people who are weary if the money they donate to cancer research actually makes a difference, in which the mother of three added she is living proof. She was told as recently as five years ago, her prognosis and treatment options would have been very different, and a path for a cure would not have been likely for Stage 4 cancer that had spread to other organs.

“The doctors said to me always, ‘we are going for a cure.’ Five years ago, that wouldn’t have been an option. It has advanced that much,” said Meier. “I was lucky, I was relatively young, I was healthy and not on any medications or had any surgeries previously. They were able to be very aggressive with three different types of chemotherapies.”

Also, the development of drugs like Neulasta, which was a direct result of research, was critical in allowing Meier to tolerate chemotherapy which kept her on the necessary two-week regiments. The anti-nausea drugs also played a huge role.

Meier has been extremely thankful for the support her team has got leading up to The Enbridge Ride to Conquer Cancer, from friends, family and even complete strangers. A fundraiser is being held this Friday at the Cadet Hall that features a beef dinner, dance and silent auction, where hundreds of tickets have already been sold, in an event that has a near zero cost to it thanks to the generous support of the business community and individuals.

“We sold out 230 tickets in just over two weeks. The hall was donated, the beef was donated, the vegetables and potatoes have been donated. Every single part of the meal has been donated,” said Meier. “My own band that I used to sing with years ago, all those guys, we are going to play at the event. There are two bands that have offered to come out and play for free. Almost 100 per cent of the proceeds are going to be able to go back to the ride.”

For those who were unable to get a ticket to the beef dinner fundraiser, but want to donate to Team Leah — Fight For Your Cure, they can log onto http://www.conquercaner.ca. Click on the Alberta 2019 event, then click on donate and search for Team Leah. You can also call 403-775-1439 and the donation will be put into the team fund. Meier added, for each of the team members to be able to participate in the ride, they must raise $2,500, so she cautions to make sure to click on one of the names that hasn’t reached the $2,500 mark yet.

“One thing about donating online is I’ve reached my personal goal. Everyone on the team needs $2,500. Pick the person who needs it the most so all my friends get the gift to ride. I don’t get to transfer any money over,” said Meier, who was at $2,645 herself as of Friday morning.

And while Meier is raising money for the Ride to Conquer Cancer, she also wants to have her life experience in her battle with colon cancer serve as a cautionary tale for regular health checks.

“Many types of cancer, colon cancer in particular, are either preventable, treatable or curable if detected early. Please don’t ignore any signs or symptoms, no matter how minor they may seem,” said Meier. “Go to your doctor, get a colonoscopy, a mammogram, or even a regular physical. Be proactive, be an advocate for your own health. Don’t die of embarrassment.”