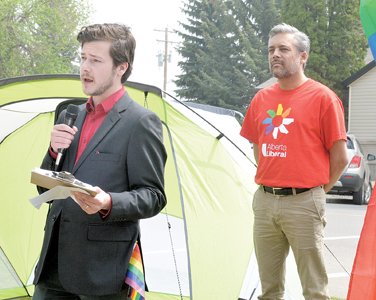 Pride celebrations have concluded for another year in Taber, but its causes are still resonating at the highest levels of government.

Devon Hargreaves, co-chair of the YQueerL advocacy group and former Lethbridge-East political candidate, made a return visit to Taber pride earlier this month to speak both on the struggles the local advocacy event has endured and the work that is currently being done for LGBTQ+ rights.

“The Pride community in Taber has faced incredible obstacles. Flags torn down, stolen and burned. We’ve seen the queer community of Taber camp out overnight to protect the flag, exhibiting an immense amount of dedication,” said Hargreaves, among several dignitaries that attended the Taber Pride flag raising on June 1 at the entrance to the Taber Provincial Building. “Through it all, this festival has only grown larger. This community is a beacon of hope for the entire queer community in southern Alberta. Not just today, but over the last three years, I’d like to extend a sincere thank you to everyone who has fought for this event to happen.”

Last year, Hargreaves talked about how Pride is not just limited to a day, a week, or a month, Pride is about living one’s life to its truest form and advocacy. At the 2017 Taber Pride celebration, Hargreaves came to the community asking them to sign a letter banning conversion therapy, and asked the crowd once again in 2019 to sign another letter to make sure the practice is banned once and for all across Canada.

“We are up against the clock, with a pending federal election and a provincial government that has not given any indication that a provincial ban is coming. If anything, they have made the situation worse,” said Hargreaves. “If we can get conversion therapy added to the Criminal Code of Canada, it doesn’t benefit just Canadians. It gives other nations a springboard to follow suit. On April 9, Senator Serge Joyal tabled Bill S-260 to enact in the Criminal Code. This is the direct result of all our hard work.”

Bill S-260 states ‘this enactment amends the Criminal Code to make it an offence to advertise conversion therapy services for consideration and to obtain a financial or other material benefit for the provision of conversion therapy to a person under the age of eighteen.’ Members of the Canadian Senate have given second reading to a bill, but the bill would still have to be approved by Members of Parliament.

Both the Senate and the Commons will be taking a summer recess soon, and an election will be called in the fall. The Senate initiative could be lost in the shuffle of transitioning governments.

Hargreaves and his volunteers were gathering more signatures at Taber Pride in its petition to ban conversion therapy which he will bring to the Senate to add strength to the message.

“And to the Prime Minister. They must take action now. This movement was started in Taber, let’s get through the end together,” said Hargreaves.

After his speech at the Taber Pride flag raising ceremony, Hargreaves talked further with The Times, where he found comments made by the press secretary to Minister of Health Tyler Shandro, late last month, disturbing, which noted conversion therapy ‘is not practised in Alberta, and it cannot be, because no health professional regulator would permit it.’

“For the Minister of Health to advise that conversion therapy doesn’t happen in Alberta shows that he is out of touch with Albertans. Within the queer community, we know this has been happening and we’ve been fighting it for years. If it wasn’t happening, there wouldn’t be a need to get a ban in place. ” said Hargreaves. “A large part of conversion therapy is church based and religious counseling. On the other side of the spectrum, we’ve had pastors in Calgary calling for the ban as well. It’s a matter of getting support. Over 18,000 Canadians have signed the federal petition for it. We are not going away, we are continuing to fight it, and hope it gets banned.”

Conversion therapy was recently depicted in the American film ‘Boy Erased.’ In the U.S., Colorado declared a ban on June 1, following New York and Maine earlier this year. Puerto Rico, an American dependency, also outlawed the practice this spring.
Hargreaves was at the Alberta legislature on Thursday to take part in a rally on banning conversion therapy, as a 12-member panel of Albertans who were looking into the issue were wondering their fate if their group were defunded under the UCP government.

“It looked like there were between 150 to 200 people at the rally. I know there were five from Lethbridge and some from surrounding communities,” said Hargreaves, adding they talked to people who were shocked conversion therapy was still a thing in today’s day and age. “It’s 2019 and we just came upon the 50th anniversary of homosexuality being decriminalized in Canada. We are making progress as a country, but these things slip through the cracks where people just assume this isn’t happening. Being part of the LGBTQ+ community is no longer considered a mental illness and people just assume that it is common sense that these things (conversion therapy) shouldn’t exist.”

Hargreaves added some politicians are afraid of alienating some of their base to take a stance on conversion therapy, even though in some provinces and internationally, more and more people are banning the procedure.

“Phobias against the queer community is a very real thing and it has to be addressed. It’s a matter of educating people on the practice and its realities. Hopefully, people turn around and reach out to their politicians to get it banned,” said Hargreaves.
Former health minister Sarah Hoffman, under previous NDP rule, earlier this year created a citizen committee to recommend how a ban on “conversion” of under-age Albertans could be implemented. The group includes an Anglican archdeacon, a theologian, the executive director of the Edmonton Pride Centre and a self-identified “survivor of conversion therapy.” Its co-chairs are Glynniss Lieg from the Institute of Sexual Minority Studies at the University of Alberta and NDP MLA Nicole Goehring from Edmonton. Goehring had offered to step down in favour of a UCP representative to help lead.

Hargreaves’ advocacy group was joined by the Lethbridge Public Interest Research Group and other advocacy groups from Edmonton and Calgary.

The advocacy group were met with a result they did not want to hear on Friday as the provincial UCP government officially defunded the group.

“MLA Goehring indicated that the group will continue to meet and submit their recommendations to the Ministry of Health once that is completed. I do hope the ministry takes the recommendations seriously,” said Hargreaves. “But from their track record in funding the group and bringing things into question like GSAs, I don’t know how much hope Albertans can have in taking the issue seriously. We have been fighting to ban conversion therapy for two years now, canceling the working group is just another roadblock and gives us a greater sense of urgency to put restrictions on it federally. We are asking every Albertan and in fact every Canadian to reach out to their senator, their MP, their prime minister.”