Half-masting of flag for deceased veterans 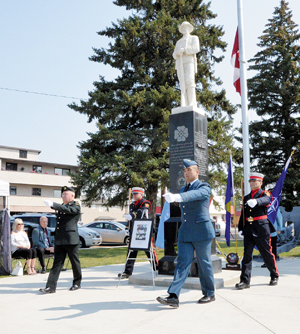 Town council has authorized a local veterans organization to half-mast the Canadian flag at Cenotaph Park upon the death of a veteran from Taber and area.

Len Barry, president of the Southern Alberta Society of Veterans in United Nations Peacekeeping (SASVUNP), headed the delegation that made the request at council’s April 23 meeting.

“We have a group, probably about seven years ago, decided to break away from the Legion and start our own UN group. Every year, on a couple of different occasions, we have different ceremonies held at the cenotaph… we want to lower the flag to half-staff when a veteran passes away, and the flag would be at half-staff for two or three days until they put him in the ground, and then finally the flag goes back up. The flag would never be removed from the flag pole, and would never be replaced with another flag. If it’s a UN or a NATO veteran, or one of these significant actions where guys were killed, then we’d go do our other thing.”

Under the town’s current flag protocol procedure (Half-Masting Sec. 6.A.IV) flags are to be flown at half-mast at all town facilities to mark periods of official mourning upon the death of a resident of Taber who is a member of the Canadian Armed Forces while deployed on operations. The procedure is not specific to the Cenotaph Park location, and only makes allowance for residents of the Town of Taber, and not the Municipal District of Taber or surrounding area.

“The Cenotaph is a monument that was put in place to honor veterans that made the supreme sacrifice during both world wars and the Korean conflict,” said Barry in an April 2 letter to the town. “We are presently working with the town, Royal Canadian Legion plus other groups to redo the Cenotaph Park to encompass all other conflicts since 1953. This will include all UN and NATO deployments.”

Barry was seeking permission to half-mast the flag at the Cenotaph Park location upon the death of regional veterans, rather than only limiting the honour to town veterans. According to Barry, SASVUNP volunteers would undertake the flag activities and would not require town resources.

“The funeral home would contact us when a veteran passes,” continued Barry in his April 2 letter. “Another member and I would lower the Canadian flag at half-staff at the Cenotaph. The flag would remain at half-staff until the day the veteran is buried, when we would then raise the flag. This is not something new. It’s a military custom that has been going on all over the world for years. The veteran that is put to rest was willing to give up his life to protect the flag and what it stands for. If permission is granted, this will be a tribute for veterans only.”

Coun. Jack Brewin and Mayor Andrew Prokop sought clarification of the geographical area that was being contemplated by SASVUNP.

“Local veterans, our area of southern Alberta,” confirmed Barry. “I’m notified by the funeral home if so-and-so passes away, and that’s the only time the flag would be lowered.”

Brewin also inquired about what organization — the Legion, SASVUNP, or the municipality — retains control of the flag at Cenotaph Park.

“The town has full say about what happens there,” said Barry. “Anytime we use it and lower it to half staff, I would call the town.”

Following discussion, council voted unanimously to authorize SASVUNP half-masting the Canadian flag at the Cenotaph Park location when a local veteran passes away, from the notification of death until burial.

SASVUNP had also requested permission to half-staff the flag at the cenotaph on special days of remembrance, such as marking the dates of important battles in Canadian military history.

“Recently, we celebrated the Battle of Vimy Ridge. I was hoping to be able to lower the flag that day, too. A lot of the guys that are on that cenotaph are Second World War vets, and World War I vets.”

Barry’s supplementary request was discussed briefly by council, but was ultimately declined. The SASVUNP president also mentioned that he would like to promote more involvement at Cenotaph Park events by the local air cadet squadron, 225 Taber Comet.

“One other thing, we’d like to get the cadets involved in more activities around the cenotaph.”