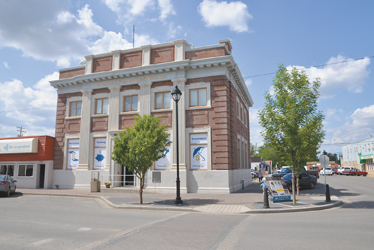 The Town of Taber is targeting the downtown core’s intersection bulb-outs for additional benches to be utilized by seniors and pedestrians.

During the councillor request portion of the April 23 meeting, Coun. Mark Garner brought forward the idea for the 51st and 53rd Street intersections.

“Possibly purchasing some benches — four benches in total — for main street, primarily located on those bulb-outs. I see a need there, in that when people use the handi-bus, seniors need a place to sit while they’re waiting for the handi-bus to come rather than just standing there. We don’t provide anything like that.”

Garner related he had already discussed the proposal with fellow council prior to the April 23 meeting, and suggested allocating funds from the Council Discretionary Fund.

“I talked to most of the councillors, and proposed locations of four benches that we could possibly purchase through our discretionary fund.”

Coun. Garth Bekkering appeared to be aware of the anticipated cost of the proposal, although this information was not included as part of council’s April 23 agenda package.

Garner replied that for benches of this type and design, a cost of $5,500 was in the range.

“I’ve looked at some catalogues along with Mayor Prokop a few months ago, and they don’t give those things away. They’re weatherproof, usually they’re powder-coated, they’re built to be outside.”

Coun. Jack Brewin asked if the benches envisioned by Garner would be similar to benches installed near the town’s spray park.

“They’re a little more dressed up than the blues in playgrounds,” said Garner, who went on to explain the benches would be bolted down, but admitted he had not previously inquired about the funding availability in the Council Discretionary Fund.

“There would still be room within the Council Discretionary Fund.”

Garner was prepared to withdraw his motion after suggestions were made that further investigation of the costs involved might bear fruit, but Coun. Joe Strojwas curtailed this action.

“I don’t see why we’d want to delay this here. If we make the motion, up to $5,500, and we had a look at some different options, I think Councillor Garner can proceed with a motion at this time.”

Coun. Carly Firth advocated approaching local clubs or organizations to see if any might want to donate benches to the community.

“I like the idea. I do think there’s a need downtown for some benches. Have you considered the possibility of approaching local service groups and having them possibly donate a bench, and then they could have a plaque on it, and then it would decrease the cost for the town, and also increase the visibility for local service groups.”

Garner agreed this was a possibility, and Brewin seconded Firth’s suggestion.

“I like Councillor Firth’s suggestion of sponsorship, something classy with a nice plaque on it.”

Taber’s streets could stand some improvement in this department, argued Garner, citing the example of surrounding communities.

“I understand your concerns, I just think in looking around at some other southern Alberta communities, I think we’re really lacking. I think we want something that’s classy but vandal proof, powder coated, that sort of thing. I’m not so sure we could do that locally.”

Following discussion, council voted unanimously to direct administration to purchase/accept donations of four weatherproof benches to be installed in the downtown core on 48th Avenue bulb-outs (two each on the 51st Street and 53rd Street bulb-outs) for a cost not to exceed $5,500, with the funds to be allocated from the Council Discretionary Fund and the project to be completed by Sept. 15.