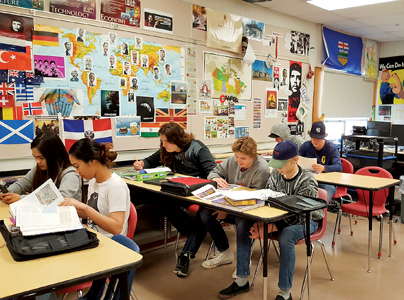 Despite being under the voting age, students were engaged in and informed about the provincial election as schools took on the role of election officers and casting ballots for the official candidates in their electoral division.

Elementary, middle and high schools participated in Student Vote. With the official voting age being 18, there were students in high school that got to participate both in the mock Student Vote election where votes did not officially count, while also having a chance to have their vote officially recorded in the regular provincial election which happened on April 16.

W.R. Myers made Election Day into a field trip, where Social Studies teacher Dale Friesen took his Grade 12 class to the polls so that his half-dozen 18-year-old students could vote.

“We wanted to make this a learning opportunity. We are going to watch some of you who are 18 who have the opportunity to vote. We had conversations with people who were in line. People were expressing their opinions. It was quite an amazing experience,” said Friesen. “That was one of the best classes we had in a long time. People were talking about all the issues that are at stake. Regardless of how the kids voted, it is an important process.”

Afterwards, the class headed over to Tim Hortons where kids discussed the process which Friesen described as a ‘lively’ conversation.

Friesen was happy to see some of his Social Studies students get closure with the Student Vote program, where the researching of issues in the classroom could pay off in the end with an official vote in the ‘adult’ world of democracy.