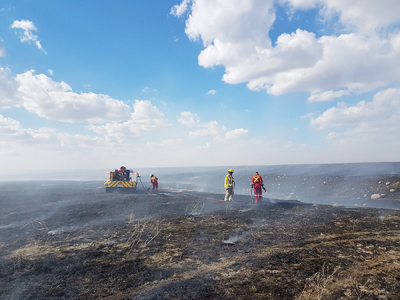 To say the Taber Regional Fire Department had a busy Easter week would be an understatement, the funny thing is, it hasn’t been the busiest stretch in recent memory.

“I’d say about three or four years ago, when we had that really dry summer and the winds were extreme as well. We ran non-stop for a couple of weeks back then,” said Brian Schafer, M.D. of Taber Regional Fire Chief and M.D. of Taber director of emergency management. “That was definitely a busy time too. It was extreme enough that when we left, we made sure another department left too for back up so we could get our foot on it right away.”

Nevertheless, Easter Week 2019 will certainly rank right up there.

Station 5 (Vauxhall) was called to a scene south of Vauxhall on Easter Sunday where an innocent-enough target-shooting incident turned into a numerous-acre fire that had to be contained.

A simple spark from a bullet hitting the metal target started a small fire around the target area and with dry conditions and gusting winds, the fire grew out of control.

“A spark hitting the metal target was enough. The humidity was very, very low at that point. When it’s lower, everything is drier and it’s easier for a fire to ignite. It’s no different than a farmer driving in a field at harvest time and a combine strikes a rock,” said Schafer. “The metal on a rock makes a spark and poof, low humidity, dryness, a spark and some wind and away the fire goes.”

The 9-1-1 call came in around 4:18 p.m. on Easter Sunday and 23 Regional Fire Service members from Station 4 (M.D. of Taber), 5 (Vauxhall) and 7 (Barnwell) responded to the call along with three water tenders and nine fire apparatus. The plume of smoke was visible as far away as Barnwell and Grassy Lake.

“It was in the middle of nowhere and being close to a mile off the road to get to the call, driving through grazing land to get to the fire. It was west of Highway 36 on the road going towards the old Taber highway. I call it the 521,” said Schafer of the 90-acre fire that was aided by Taber Water Hauling and Copperfield Farms for assisting with water and Taber Police Service dispatch for getting TWH involved.

“We had boots on the ground, people were geared and masked up with hoses in their hand and spraying those hot spots. There were about 13 or 14 with boots on the ground and others were driving,” said Schafer. “We were there shy of four hours. The tones go off and people drop what they are doing and off they go to assist. It’s pretty remarkable that people will do that in this day and age, missing their Easter with family and friends to answer the call. A big hats off to all our volunteers who helped.”

The next day saw two call outs with Station 5 receiving a call at 12:05 p.m. about a tractor fire near the Hamlet of Enchant.
Engine 5-2 provided mutual aid, with an extra 3,000-gallon water resource for Station 3 (Enchant), with extra water just in case the tractor fire turned into a grass fire.

Later that night, another call came in at 5:45 p.m. for a structure fire within Town of Vauxhall limits.

The first unit arrived within three minutes of being dispatched and discovered the fire to be a small garden shed. The fire was put out and items were removed in order for crews to utilize the thermal imaging camera to be sure the fire was fully extinguished. The interior was wetted down again to be sure.

The full extent of damage was contained to the shed and the structure was still in good enough shape to be used moving forward.

No damage was reported to the house or on both sides of the shed and all trucks were back in service by 7:30 p.m.

It was discovered through questioning of neighbours that the fire was purposely set by a youth playing with a lighter in the shed.

“We need to educate the young ones and everybody that playing with matches or lighters is dangerous. Not only can you destroy property, you can burn yourself and severely injure yourself,” said Schafer. “It was a good thing the neighbour from behind was out barbecuing, because he was the one who saw the smoke and called 9-1-1. If he hadn’t have been home that night, that shed would have fully engulfed and it was close enough in-between the two homes, it was probably eight to 10 feet. With melted siding, they probably would have caught on fire as well and it was windy at night. Anything could have happened.”

As M.D. of Taber-area residents continue to enjoy spring and head into summer, Schafer encourages people to read up on Fire Smart information the departments have shared all over its Facebook pages.

“You fire smart your property around your home. It doesn’t matter if you live in town or in the country, it sets out specific zones of what you should have where in your yard to reduce your risk of fire,” said Schafer, adding residents should also follow permit protocol if they do not want to end up with a hefty bill at the end of a fire call. “If you are going to burn, you need a permit and you need to follow the rules of the permit. If the rules of the permit aren’t followed, then unfortunately, the local fire department will be giving the local ratepayer a bill for the service of being there. If people follow the rules of the permit and the fire happens to get away from them, there are four hours of fire service that are at no charge to the M.D. of Taber resident. As long as they follow the rules, and a fire happens, we are there to help. Call 9-1-1 as fast as you can and the first four hours is free, there is no charge.”

M.D. of Taber Regional Fire Service wants to remind parents to discuss the dangers of playing with matches and lighters with children to avoid similar incidents.