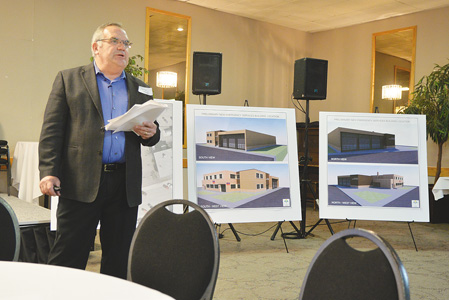 With the Town of Taber now targeting property on 49th Avenue for a fire hall relocation, citizens gathered for an information session last week to learn new details about the controversial project.

Hosted at the Heritage Inn on March 21, the evening was billed as an “information session” rather than an “open house” and featured round-table discussions between citizens as part of the process.

Despite earlier promises about public consultation prior to finalizing their decision, council has again pushed forward with selecting a location. Following in camera discussion at council’s Feb. 25 meeting, a motion passed by council has directed administration to purchase Lots 1-6, Block 1, Plan 5638L (the post office and adjacent vacant property to the east on 49th Avenue) with a tender for the project to be awarded by July 1.

According to information presented on Thursday evening, “extensive” past public engagement has illustrated to town council that an emergency services building should not be located near a public park, school or residential area.

“We came because we wanted to know what’s happening. Is it a done deal, or do we get a vote?” questioned Karen Ingram. “What is the cost in operating from this (previous) building in comparison to this new building? Is the fire department going to be buying new equipment or using the current after they move in? I personally did not — and still do not — think that lot is big enough for what is being planned there. I’ve been told otherwise, but you have to convince me.”

Points in favour of the new location included its proximity to the downtown area, meeting a 10-minute response time for all residential development, and the incorporation of the facility into an existing revenue-generating leasehold structure. It was noted that the planned facility was not located in the vicinity of residential development, schools or parks, although the KidZone location inside the former public library has raised similar concerns among some citizens.

“We find ourselves 20 paces away from the corner of the lot where this is going to be built,” said Patrick Horvath, an operator of KidZone on 49th Avenue. “We operate there 250 days a year, from 6:30 a.m. to 6:30 p.m. everyday, we have families, and parents, and kids coming and going at all hours, it’s not that everyone starts at the same time and leaves at the same time. We’re quite different than a school. There’s lots of walk-in traffic, including the parents. There’s all kinds of parking issues along this street already as it is, how is that going to be dealt with in the future?”

The total cost of the project is now being projected at $4.5 million, consisting of $1.4 million from the Ferguson Estate for which the facility is to be named, $496,000 from the town’s Energy Conservation Reserve for green efficiencies, $404,000 in 2019 MSI (Municipal Sustainability Initiative) funding, $1.2 million from an offsite levy, and $1 million in savings from 2018 approved projects through an “internal borrowing” process. The street address will be 5207 49th Avenue.

“We need to have clarification of the process that’s brought us from 10 years ago to the present,” said Ray Sheen, seeking an explanation of the decisions involved in removing the original fire hall from the downtown and relocating it to the industrial area.

Facing a public backlash over an Aug. 20, 2018 decision to relocate the fire hall to a site near 50th Street and 52nd Avenue, on Oct. 9 council had reversed this decision, taking the municipality back to square one. In the 2019 capital budget, a new fire hall (land and construction) had been allocated $3.5 million.

“One of the big questions here, is this a conflict from a developer that can directly benefit from this sale?” questioned Luke Wijna. “Another question we have, we asked a year and half ago for a plebiscite, and it was $20,000 – $25,000. What this council has spent in the meantime, I would like to know.”

Details volunteered at the town’s information session indicated the municipality is tentatively seeking a spring 2020 start date for construction.

“First and foremost, sell me on the reason that we actually need to have a new facility,” said Todd Ginther. “I’m not there yet. But that’s my biggest concern. Now that they’re changing this proposed site, I will rally around anybody else that has concerns with it being in their area as well.”

Facilitators would also field questions on potential tax implications, and whether the proposed facility will be adequate for the town’s needs in the future.

On the heels of a number of questions from the floor regarding increased traffic congestion and parking on 49th Avenue with the construction of a new hall, CAO Cory Armfelt announced the town has a plan in place to deal with this problem.

“The town is in conversations with the Legion to acquire the parking lot to the south end of the property… which would be parking for people coming to respond to an emergency, people that would be working there on a day to day basis.”

Armfelt confirmed the cost of this lot has been baked into the town’s project estimates and shouldn’t represent a phantom cost overrun.

“The $4.5 million is right now an estimated cost. So the issue is we haven’t tendered this building, so we don’t know what the price of the building is going to be. We’re pretty certain we can get it done for that $4.5 million. So the price of the parking lot is actually within that price estimate.”

After providing an explanation of the purpose of an offsite levy, Armfelt suggested council needs to ensure that new investment isn’t discouraged.

“That’s a balance that council has to strike with regards to offsite levies.”

The town’s defense of the need for a fire hall relocation has often centered on questions regarding affordable or attainable housing and the resultant HIRF (High Intensity Residential Fire) restrictions, but ensuring this style of housing can be achieved for the community appears to be another question entirely.

“It’s a difficult one to track,” said town planning director Phyllis Monks. “You’ll have building permit costs that the town does track, and we track those now, but it will also be dependent on — it will be market-driven, it will be type of housing driven. It’s a little bit difficult to track.”

During the question and answer period citizens would hear almost nothing from their elected representatives, with most questions being handled by facilitators and town administration. Allowing the fire hall question to be put to the public through a plebiscite vote has been consistently rejected by town council throughout the process.

“I got a question for the mayor,” asked a citizen from the floor. “Will he be giving us a vote on this proposal, or is he just going to go ahead and do it?”

Mayor Andrew Prokop was blunt about there being no need to take this step.

“Overall, any council of the day has difficult decisions to make, and any decision is made in the best interests of the town for the betterment of the entire community. So this decision is no different. I don’t believe this requires a public vote. Elected officials are voted in for a reason.”