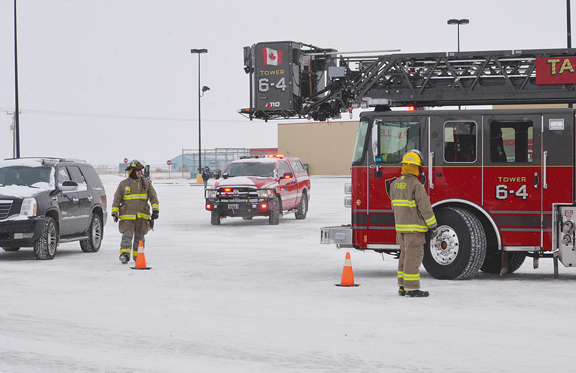 Editor’s note: This story has been updated after this morning’s TPS press conference.

Multiple charges have been laid thanks to the efforts of multiple departments spanning two countries, stemming from 10 bomb threats.

Thirty-six-year-old Justin Bagley of Elkville, Illinois has been charged with 11 counts of felony disorderly conduct in connection to a series of bomb threats made in the Town of Taber that spanned over three days. Class 3/4 disorderly conduct felonies can carry sentences ranging from one to five years in prison in the state of Illinois.

A joint investigation got underway on Saturday when police in Taber contacted the Jackson County Sheriff’s office in Illinois.

Jackson County Sheriff’s office noted investigators were able to track the phone number used to call the targets in Taber, leading to the arrest of Bagley. All told, an international suspect was able to be arrested within a 72-hour time frame from when the first bomb threat was received on Thursday night at Wal-Mart in Taber.

According to Graham Abela, chief for the Taber Police Service, Bagley accessed an online app which is used to listen to police scanners. Bagley would often listen to these from the United States but chose to attempt to spy on detachments from Canada. Bagley clicked on the Alberta tab from the app and selected Taber Police Service.

“From him, I’m not certain why he chose what he did. But, we can assume that it would be reasonable for someone who was involved in this type of activity to want to get as much reaction as they can,” said Abela. “This individual would make the phone call (bomb threat) and then listen to the radio response and receive some sort of gratification.”

Bomb threats were targeted at the Taber Hospital, four schools, CIBC, Wal-Mart and the police station itself.

“By calling Wal-Mart, or locations he would know that would have larger amounts of people at them, obviously the response by police would be greater and there would be more radio traffic,” said Abela.

“We were able to identify a number fairly early on and knew it originated in the United States. We needed a tech expert to be able to walk us through the judicial authorizations that were going to be required through Homeland Security in the United States,” said Abela. “We knew a member there (in Medicine Hat) had investigated a file similar to this about a year-and-a-half ago. We reached out to that officer to assist us and he did so.”

The police were immediately contacted and responded to the incident as per their protocols. Given the size of the D.A. Ferguson and W.R. Myers complex, and the fact that it was under ongoing construction, D.A. Ferguson, W.R. Myers students and Taber Mennonite School students who were at W.R. Myers were evacuated.

Police determined there was no need to evacuate L.T. Westlake. The police were able to quickly determine there was no threat at Ferguson/Myers schools and students returned to regular classes by mid-morning.

Counsellors and other staff continued to be available at the schools to attend to any matters the students or family members may have had as a result of the incident.
Early Friday afternoon at 12:08 p.m., Central School received a bomb threat. Students had already been dismissed for the weekend at that point given Fridays are half days at school, and were out of the building at the time of the threat.

Taber Police Service searched the school, like the other threats, after which it was also deemed a hoax according to division correspondence.

Bagley has a history of making bomb threats, having made one to a Wal-Mart he worked at in Du Quoin back in 2005, according to a report by the Southern Illinoisan. Bagley’s criminal record also includes a three-year sentence after pleading guilty to a charge of domestic battery back in 2014, where he violated a term of his probation.

Where Bagley will be prosecuted, be it the United States or Canada, has not been decided yet.

“Those are the things we are working through with Jackson County prosecutors. I can tell you, the legal system in the United States treats these things very seriously. I’m not sure it would be advantageous from our perspective to prosecute him here again in Canada, but that is an option that is on the table for sure,” said Abela.

Reports of bomb threats had surfaced in various areas in North America over the weekend. While no direct link has been made as of now to Taber’s case, the Taber Police Service is co-operating with other agencies in sharing information.

“We are examining our evidence to see if we can help any other investigators with incidences that are occurring in their jurisdictions,” said Abela.

Along with the various policing agencies, the Taber Police Service was also aided by the Taber Fire Department while attending bomb-threat calls. Mobilization of efforts was also aided with the partnership TPS had with Horizon/Holy Spirit school divisions and the Taber and District Chamber of Commerce to notify what businesses could do if they had received a bomb threat.
Businesses were asked to review their bomb threat procedures with their staff. If a bomb threat were to be received, to make a note of the time, phone number, and caller ID if available. After the phone call had ended, businesses were encouraged to hang up and immediately dial *57 and follow the prompts. After dialing *57 and completing the process, to call 9-1-1 and follow the businesses bomb threat procedure.

“We knew as a police agency we had to reach out to our different community members and partners to assist us with getting the information out about what to do when a bomb call comes into an organization. We as a police service have to check each of those as if they are real until they are proven otherwise. Public safety is our main concern and we have to address that first,” said Abela. “We were in touch very early on and throughout the weekend with administration from both school divisions, coming up with a plan in case the phone calls continued. As well, we wanted to make sure different businesses in the community that could be impacted would be aware that we have received calls, but at this time, there was no threat. We wanted them to revisit their policies on bomb threats and evacuations if required. The chamber did a great job in sending an e-mail to all the chamber businesses members. We have used that system before and it’s been very effective in getting information out to the public.”

With the bomb threats creeping into the double digits around Taber over an exhaustive three-day span, it can be trying for any police department not to get into a ‘Boy Who Cried Wolf’ mentality after several investigations have revealed the threats to be false.

“That is something you definitely have to scan for and be aware of. We are all human after all and those ideas do come into your head. But we know as we briefed as a team at the police station, we have a policy and procedure already in place for these types of events,” said Abela. “We follow that policy and procedures. That’s why we have them. We scan for that within our team debriefing with a plan to treat each of the threats as serious until we could prove otherwise. The important part for us, was to do that while still trying to reduce fear in the community. The professional responses by the Taber Fire Department, the Town of Taber and our police service, that co-ordinated effort allowed for us to assure public safety, while at the same time in the background, for us to conduct this investigation which led I think fairly quickly to the identification of a suspect and an arrest in Illinois.”

Chief Abela could not stress enough how serious the bomb threats were to the community, which affected the town in many different ways.

“This is a very serious criminal offence. It utilizes police and fire resources which don’t need to be happening. There are other things we could be doing, believe me,” said Abela. “The impact on the schools and the students is great as well. I was speaking to a colleague as they used the term ‘soft-core terrorism.’ I hadn’t heard that term before, but depending on who the culprit is and the motives behind it, who knows what was happening? I’m just happy that at the end of the day we were able to use our investigative abilities and use our long-time connections and partnerships in the community to successfully take a person, even though they are 4,000 miles away, into custody for this.”