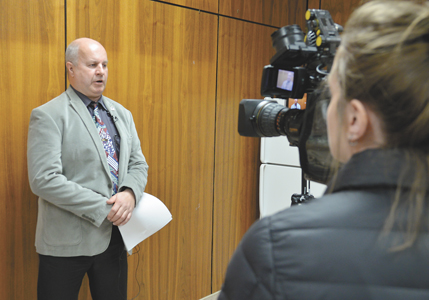 DIGITAL THEME: Based on 2018 survey results, a majority of respondents now use social media to access information about the Town of Taber. TIMES FILE PHOTO

Findings in the town’s annual communications survey show social media as the top source where citizens accessed information about the Town of Taber in 2018 at 72 per cent, displacing local print media which led the pack in 2017 with 65 per cent of respondents.

In 2017-2018, the town saw two surveys released to the public asking for opinions and suggestions on current Town of Taber communications initiatives.

“Council has indicated a desired need for improved communications,” reads a statement in administration’s background to the report at town council’s Jan. 28 meeting. “The results of this survey indicate the public’s desire for the same.”

Of special note was the demographic constraints to the survey — which were highlighted by communications coordinator Meghan Brennan in her Jan. 28 presentation — showing the 2018 survey saw 101 responses, constituting a cross section of only 1.2 per cent of Taber’s population.

“One point two per cent is very low,” said Mayor Andrew Prokop. “That’s highly skewed as far as the actual results we’re likely to get with a larger scope of participation.”

While the numbers collated in the survey are useful, Brennan hopes for more participation in future years to enhance the statistical significance of the results in relation to Taber’s wider population.

“I did a lot of searching as to surveys, because it was very low, being that it’s only the second time the survey has been released, statistics have proven that the more times you do a survey, the more people will participate,” said Brennan. “I think the third year we’ll just keep seeing the increase in participation. My plan in 2019, we’ll be doing a lot more advertising of the survey, and to go through longer than just a month. There’s a number of different initiatives we’re going to be working on to get more people involved.”

In 2017, respondent’s access of local print media exceeded all other sources for information — including the town’s Facebook page — by at least five per cent.

In the 2018 survey, those numbers have slipped significantly by almost 26 percentage points, with the town’s Facebook page showing growth over 2018 to take the lead at roughly 72 per cent of respondents.

While more people may be accessing information about the town on social media platforms, the survey results did show that not everyone is altogether trusting of the origins of that information.

“A common theme throughout the 2018 feedback was a general distrust of the official Town of Taber platforms and information,” reads a statement in the report. “Unfortunately due to a number of high profile controversies in 2018, it is likely that the public see the information provided from the town as ‘PR spin’ or ‘fake news’ from the government to hide real issues… like all governments, we cannot shy away from providing information on topics that may be controversial or high-profile in favour of lighter or more easily-palatable information. The work to strike this balance will be an ongoing initiative for the entire organization.”

Roughly 35 per sent of respondents indicated they were ‘somewhat likely’ to access the town’s new live streaming of town council meetings in future.

Results would also show a likelihood for town citizens to participate in surveys (59.79 per cent), open houses (46.43 per cent) and public workshops (46.25 per cent).

However, in the area of how the public perceives current town efforts to allow citizens to get involved, the majority of respondents (62.03 per cent) do not feel the town does so often enough.