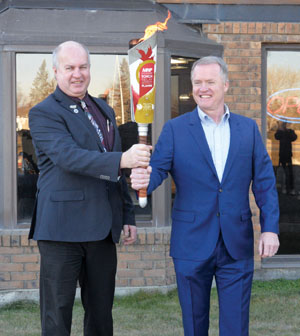 Reflecting on the past year for the Cardston-Taber-Warner riding, MLA Grant Hunter is excited about the prospect of a provincial election in early 2019.

Hunter contends UCP leader Jason Kenney has been responsible for an improvement of decorum in the house and the mitigation of so-called ‘bozo eruptions.’

“One of the things that we tried to do is establish a credible opposition to the NDP government. I think under the leadership of Jason Kenney we’ve been able to increase decorum in the house. I think it’s been more statesmanlike rather than vitriolic, which is kind of what it was before. I’m actually really happy about that. It was starting to become more of a kindergarten than a place of sober thought and legislation.”

The UCP have been hard at work at preparing an election platform, while Hunter has continued his focus on red tape reduction.

“One of the things that we’ve been working on is trying to be able to put together a fully costed, very reasonable platform for the next election, so there was a lot of work being done there. The work that I’ve been doing for caucus has been in terms of being able to put together a comprehensive red tape reduction strategy. And then as the critic of the labour portfolio, there’s been a lot of issues with the labour ministry, so I’ve been working on trying to understand the changes the minister of labour has brought forward.”

Also on the horizon for Alberta is the prospect of a federal election, but Hunter doesn’t see much evidence that a Liberal re-election would be successful in moving the goalposts on any vital pipeline files.

“There’s also a federal election coming up in October. Both of those will actually have a very material effect on Albertans, and the people of Taber-Warner. The provincial election, I believe, is going to decide whether or not we go forward and try to reclaim that Alberta advantage we used to have, or whether we continue on. That’s something that Albertans are going to have to decide in this next provincial election. Federally, because of the problems that we have with trying to get pipelines to tidewater, that’s going to be a huge issue as well. If we see another Liberal government in there, I think we’ll see more stalling of those pipelines.”

Critiquing the performance of the provincial NDP government over the past year, Hunter was harsh in his assessment of any successes for Albertans.

“If they were graded on intentions, I’d say they get an ‘A’ for intentions. I’d say they have the best of intentions, but here’s the problem: the outcomes and the results have been lackluster at best. If you were to go hire a mechanic to fix your car and you get it back and you find the car doesn’t have the engine in it, you would not be hiring that mechanic anymore. Albertans in this next election aren’t going to be looking for a fiery speech from the premier about hope and change. They’re going to be saying OK, you have a record now, we’re going to be judging you on those results. And the results have been terrible.”

Transitioning from the negatives, Hunter explained what he feels Albertans would like to see from their government moving forward.

“How do you measure the results of a successful government? I think it should be measured in terms of people being able to have gainful employment, the economy is booming, businesses are able to expand and hire people, people don’t feel that the tax burden is onerous, we have foreign investors that feel like this is a good place to invest. That’s what we used to call the Alberta advantage. Under this government, we’ve seen a dismantling of that Alberta advantage. That’s why I think it’s very important for people to be able to assess and find out if they want to see a government bring back that Alberta advantage, or whether or not they’re going to have a government that spends. That’s the key to this whole thing.”

If the UCP is successfully elected, Hunter promised that the NDP’s carbon tax would be the first measure to feel the swing of the axe.

“We’ve already said Bill 1 will be getting rid of the carbon tax. The carbon tax has been a complete disaster for this province. They’ve made it uncompetitive. Lantic Sugar in our riding in Taber has had to add cost with no ability to be able to pass that cost on — because they’re price takers not price makers — and all it is is just a cost for them. It’s no value to them at all — no value to be able to expand, to provide that extra money to purchase more employees.”

While hoping that the provincial election will not devolve into a partisan war of words more in keeping with a U.S. style of politics, Hunter doesn’t believe the left will restrain itself from mudslinging.

“For our part, we’re going to try to keep it on the up and up, and try not to get into the mud. That is one way of doing politics — I don’t like that type of politics, because we’ve seen it down in the States, and we’ve seen how vitriolic it gets. I believe Albertans want to talk about the issues — jobs, the economy, what each party has to effectively bring back the jobs and the strong economy — if we can have that, I think Albertans will be best served. But I think what we’re going to see is a lot of slander, a lot of mudslinging from the left. When that comes, we’re going to address the issue, debunk the lies that are being thrown out there, and move on and talk about the issues that really matter to Albertans.”

People in Taber-Warner are craving no nonsense fiscal policies and a return to a strong economy, contends Hunter.

“They’re looking for a robust economy, they’re looking for growth, because that trickle-down effect impacts Taber-Warner residents just like it effects people from Calgary or Edmonton or any other part of Alberta. We want people to be moving into our riding, we want people to be able to feel like there’s growth opportunities, there’s business opportunities, there’s a plethora of jobs. I’ve been door-knocking in different parts of Alberta, and that’s what I hear from people — I’ve never seen it this bad. People are just having a hard time getting work.”

The dropping of the writ in early 2019 to signal a new election will mean the end for the present Cardston-Taber-Warner riding, and Hunter thanked those constituents that will now be part of the new Cardston-Siksika riding while he continues to run in the new Taber-Warner riding.

“It’s been an absolute privilege and an honour to serve, and to be a public servant for the people of Cardston-Taber-Warner. I was disappointed to see the break-up of our riding, I thought that it was manageable, and a good riding. But every eight years you get to do that, and the NDP just happened to be there at the time. It has been an absolute pleasure. To tell you the truth, it’s been like drinking from a fire hose for the last three and a half years, but that’s just the reality of politics. We’ve accomplished a lot, we’ve brought the Wildrose and the PC parties together to form a strong opposition to the NDP, we had a leadership race, we’ve gone through a policy convention where we talked about what it means to be conservative, and what we’d like to see in Alberta going forward, and talked about a vision for Alberta.”