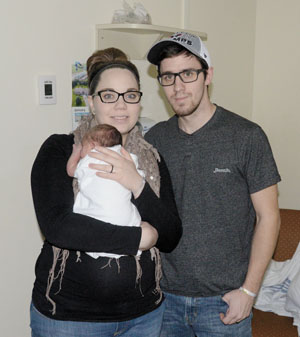 BUNDLE OF JOY: Kimberlee and Alex Aitken welcomed their son Parker into the world last Friday at the Taber Hospital. TIMES PHOTO BY GREG PRICE

The New Year’s Baby born at the Taber Hospital came in a little earlier than expected for his parents.

The first child of Alex and Kimberlee Aitken was born on Jan. 4 at 11:53 a.m., where Parker Barratt Aitken weighed in at six pounds and 12 ounces.

“He was early. Our due date was actually Jan. 15,” said proud mother Kimberlee.

Both her and her husband work in Taber, but reside in Lethbridge. Wanting to keep their family physician in Dr. Steed, the couple decided to keep their medical care in Taber.

When she was feeling her first contractions, the decision was made to hang around Parker’s grandparent’s house, close to the Taber Hospital, just in case it wasn’t false labour pains (Braxton Hicks contractions).

“We went to my parents house first because I didn’t want to just run to the hospital without knowing for sure,” said Kimberlee. “We waited at my parents’ house for about an hour or something just to see if it was real and then I decided to go to the hospital.”

With Parker coming early, the parents are fully expecting for their wake times to be coming early as well.

“We are probably going to miss some sleep,” said Alex with a chuckle.

“We are very excited though,” added Kimberlee.