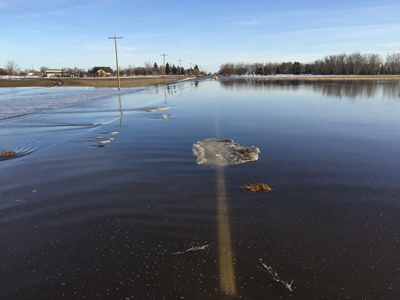 After overland flooding did $1.6 million in damages within the Municipal District of Taber, they are hoping to recoup some of their losses with the Disaster Recovery Program.

During M.D. council’s regular meeting in October, they discussed what could potentially be coming their way from the program. The province announced earlier that there was $29.1 million allocated for this year’s spring flooding for 19 southern Alberta communities.

“Previous applications we only received 70 to 80 per cent. We are hoping to get the total of $1.6 million,” stated CAO Derrick Krizsan.

While no funds have been distributed at the moment, M.D. council was pleased they would be receiving some type of funding in the near future.

Chris Gallagher, district manager with the Taber Irrigation District — which also saw significant damages due to overland flooding and has qualified for their own portion of provincial funding — singled out the M.D. of Taber’s emergency response for special recognition.

“In the end, the overall emergency response, the coordination the M.D. of Taber had in this response, was wonderful. It’s hard to measure the amount of protection that was done and the avoidance of a lot of damages in terms of that coordination. They did a good job, Alberta Emergency Management Agency did a terrific job, just in coordinating everything.”