Respect poppy protocol the best way you can 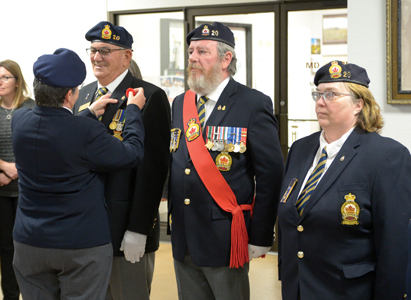 Approximately 21 million poppies are expected to be distributed across Canada in 2018, where Remembrance Day ceremonies will help commemorate the 100th anniversary of the end of World War I.

Just as certain protocol will be featured in these ceremonies, there is also proper protocol for people in wearing the iconic Canadian symbol of freedom. Canada adopted the poppy as the symbol for Remembrance Day in 1921.

“There is absolutely a recommended protocol. The problem is, there are numerous sources out there (the Internet), that tell you different things. But from Dominion Command of the Royal Canadian Legion, they do have a recommended protocol for the public to follow,” said Chris Nguyen, sergeant at arms for the Taber Royal Canadian Legion, and a member of the organizing committee for Taber Remembrance Day ceremonies.

The poppy is to be worn in a way that is dignified and respectful, on the left side and on or close to the heart. Being the guidelines for civilians, sometimes different organizations have their own protocols for the poppy.

“Organizations such as the RCMP for example, display their poppy on their Stetson. In the military, for the operational dress, they wear it on the rank sleeves which is right in the center of the chest,” said Nguyen.

The poppy time frame to wear is from the last Friday in October, up to the end of Remembrance Day on Nov. 11. It is also respectful to wear them at other times of the year, including ceremonies to honour veterans, such as funerals.

The Legion’s lapel poppy is a sacred symbol of remembrance and should not be affixed with any pin that obstructs the poppy. Many Legion branches provide poppy keepers, clear plastic ends that can be attached to the back of the pin so as not to obscure the poppy, yet still keep it secure.

Also, available through some branches is the Legion’s reusable black center poppy pin to affix your lapel poppy. It is a rule that Nguyen admits is not etched in stone as the Legion states in its guidelines for poppy use that ‘it is undoubtedly better to wear a poppy with a Canadian flag in the center than not to wear a poppy at all.’

“There are so many different ways to wear a poppy. There are the stalwarts out there that say ‘you can’t blemish the image of the poppy with a poppy saver or trying to pin it to your chest.’ Ideally, if you can, try and avoid that,” said Nguyen.

“But at the same time, I’m of the opinion, if you are willing to wear and display a poppy respectfully, I’m just happy you are wearing it, however you choose to affix it to your clothing.”

There are no limits to the number of poppies one can wear, whatever number they are comfortable with. Queen Elizabeth II routinely wears several poppies when honouring the war dead. Sometimes people wear more than one because they want to honour several countries or several individuals.

Disposal of poppies is encouraged to be left at war memorials. Whatever choice of disposal, one should not be simply littering by tossing the poppies away as it is disrespectful to both the living and the dead.

“It’s not about glorifying war, it’s about honouring veterans who have served and had to pay the ultimate sacrifice for us to enjoy our liberties and freedoms,” said Nguyen.

1. In 1915, John McCrae, a doctor serving in the Canadian Artillery, wrote the famous poem In Flanders Fields.

2. Remembrance Day was first observed throughout the British Commonwealth in 1919.

4. Canada adopted the poppy as the symbol for Remembrance Day in 1921.

5. Poppies were the first flowers to bloom on the battlefields in Belgium and France during the First World War.

6. Poppies flourish near battlefields because the lime from rubble and debris makes for fertile soil.

7. Replica poppies are sold by the Royal Canadian Legion to provide assistance to veterans.

9. White poppies are worn as a symbol of peace and the wish for an end to all wars.

10. Purple poppies are worn to remember the animal victims of the First World War.

11. The year 2017 marked the 100th anniversary of the Battle of Passchendaele, which began on July 31, 1917 and was one of the bloodiest battles of the First World War.

12. Tanks had little effect during Passchendaele as the muddy conditions made them unable to move.

13. The Ypres area of Belgium was the first time poison gas was used on the Western Front.

14. Nine Canadians earned the Victoria Cross for fighting at Passchendaele.

15. The last surviving British soldier who saw combat in the First World War was Harry Patch, who lived to 111. He died in 2009.

17. At the outbreak of the Second World War, there were only 37 Canadian vessels registered for foreign voyages. Nearly half were lost to enemy attacks.

18. In total, 516 Canadians died during the Korean War, the third deadliest conflict in Canadian history.

19. Approximately 40,000 Canadians served in the War in Afghanistan before operations came to an end in March 2014.