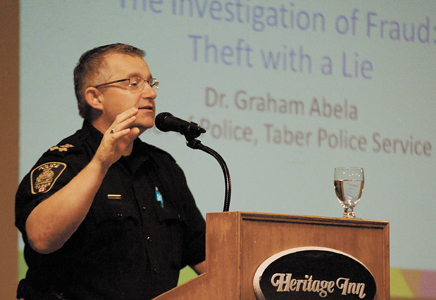 Among the guest speakers was Graham Abela, police chief for the Taber Police Service.

“That cheque would say that I promise that when I purchase this pair of shoes or this food, the amount of money I’m writing the cheque for is actually in my bank account. You as an individual were accepting that as a promise, that in good faith, that that money was actually there when you deposited that cheque,” said Abela. “People would write these cheques without having the money in their bank accounts. You would deposit these cheques thinking the money was good, and it wasn’t. You would give NSF fees (non-sufficient funds) and you would come to the police service and you would say someone bounced a cheque on me.”

Technological advances eventually came in the banking industry which reduced the number of cheque investigations the Taber Police Service had to undertake. But at the same time, technology came along that opened up a whole other range of fraud that kept local police busy with investigations — the Internet.

“The Internet has opened up a huge number of frauds that have been perpetrated on individuals in this community and globally for that matter in terms of fraud,” said Abela. “Credit card fraud is enormous and credit card companies spend gazillions of dollars a year to try and prevent frauds from happening internationally. Also, insurance fraud is enormous in this country. It’s not only around false claims, but it’s around the inflation of claims people perpetrate against insurance companies.”

Fraud is always theft involving a lie, according to Abela. The concept of the lie can be numerous.

“The one that we see that has the greatest affect on individuals is the concept of relationship fraud. Because of the Internet, we see people go through transitions in their lives. People are wanting to find new relationships with a partner,” said Abela. “People go to web sites in an attempt to enter these relationships with people around the world. Unfortunately, there are people who go on those sites and prey on that fact. They will start fraudulent relations, so lies, with people online, where at the end of the day, they ask for money.”

Taber Police Service has been involved in relationship fraud investigations that have totaled over $200,000 in single cases.

“Individuals who have fallen in love with someone who in one case, someone is sitting in a hotel room in Montreal on a laptop, purporting to be someone that they aren’t,” said Abela. “At that time, the person feels like they are in love, having a connection with the person. They are then being fed stories like my son needs to go to university and they can’t afford it. Or my mother died and I can’t afford the funeral. It’ll start off with like $2,000 here or there, or $10,000 with Western Union being sent.”

“When they broke into the hotel room, there was a fellow who looked nothing like the picture he had sent the person in Taber. On the laptop, he was talking with like 10 or 12 other victims, watching the Montreal Canadiens play the Calgary Flames,” said Abela. “It was absolutely amazing that we were able to arrest that individual and bring them back to Taber to face prosecution. He served three years. But, that type of fraud occurs all the time internationally, in places where we don’t have the reach of law enforcement, where police can’t go. Places like Russia, some of the African countries like Nigeria specifically with their money scams. We don’t have treaties with those countries to extradite them and bring them here.”

It shows that even small-town Taberites can be victims of large-scale international fraud.

“Although the Internet has done many great things for us, it’s done some bad things as well,” said Abela.

Abela noted the problem society has today in business is a hypersensitive privacy expectation, where a business does not want to interfere with an individual’s right to send money where they wish. If someone is pushing to have something paid for in a commodity or currency that is something other than cash, it is likely fraud, according to Abela.

“Many of you work for businesses, or have businesses or have friends who work for businesses who use Western Union or other commodities as cash. Anytime someone comes to you and says ‘I need to send a $10,000 money order transfer to Nigeria in order to support my loved one whose mother just passed away’, that should set off some alarm bells in your head,” said Abela. “There seems to be few checks and balances in our system that allows individuals to just question and say ‘are you sure this is the right thing to do? Perhaps you are being scammed, you need to examine this.’ That’s one thing that occurs that I think we can improve.” upon for small businesses across the country.”