Hidden carbon tax doesn’t do much for environment; MP Shields 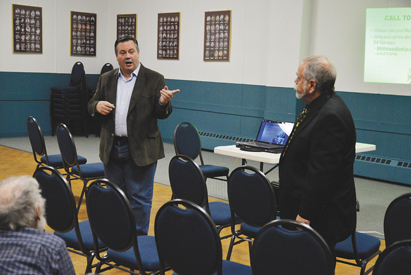 Provincial opposition to the federal government’s imposition of a carbon tax continues to grow, and local conservative politicians are witnessing a groundswell of grassroots support for a fight with Ottawa over the initiative.

In Alberta, the NDP government of Premier Rachel Notley has already instituted a provincial tax, but this may be one of the first policies to fall under the axe if a UCP government under Jason Kenney is elected in 2019.

Crisscrossing his riding over the summer, Bow River MP Martin Shields reports constituents are not pleased with the idea that Prime Minister Justin Trudeau’s Liberals are still pushing for a federal carbon tax model for all provinces.

For Cardston-Taber-Warner MLA Grant Hunter, Doug Ford’s electoral win in Ontario will be a boon for provincial opposition to the federal carbon tax plan.

“I think Ontario voting in the Doug Ford Conservatives was a real win for us, in getting rid of the carbon tax. Adding to the Saskatchewan challenge from the Conservatives in Ontario will be very helpful. If we are privileged to form the next government, we’ll also be helping to fight that. So if you’ve got Alberta, Ontario, Saskatchewan, and possibly even Manitoba now, then we’ll have a fairly good coalition to get rid of this.”

Ontario is promising a constitutional challenge to the initiative, and earlier this month Saskatchewan revealed the legal arguments it plans to use to assert its view that it can’t be forced to comply with Ottawa’s environmental policies.

“In my opinion, as a tax, it really is not accomplishing what they say it’s trying to accomplish, which is to decrease GHG emissions into the air,” said Hunter. “That’s the big problem I have with it. Their numbers say they need to have it around $200-$300 a tonne in order for it to be able to work, in order for it to be able to curb buying decisions. They’re saying they’re not going to raise it above $50, I can’t see how it’s going to accomplish what they want to.”

Recent changes to the planned subsidies for industrial heavy emitters announced by the federal government have been widely interpreted as a signal of limited retreat, but this is being disputed by economists and climate experts.

“Now, obviously the big one with Ontario out, if you throw in Alberta coming, Saskatchewan never in, Prince Edward Island saying they’re not going to, Nova Scotia has a plan without a carbon tax to reach the goal that they believe — I think you were seeing things that happened like the federal government saying this is hitting things like big businesses, we need to back off the big businesses, because it’s going to hurt,” said Shields. “That’s like the (sugar) plant in Taber. That’s the ones that it can hurt with the greenhouse emissions. If they back off on companies like them, that makes them possibly more viable. If it goes up it makes it more critical for the Taber sugar beet plant.”

Shields suggested this “backpedaling” on the part of the federal government may lead to further watering down of the federal initiative, or perhaps even seeing the idea scrapped in the near future. However, others are arguing the controversial plan may become a key battleground in an upcoming federal election in 2019.

“I think there’s a realization from the federal government that the tax is not taking care of them (large scale industry) business-wise, with the U.S. businesses, so I think that’s an indication that they’re realizing that as slight as it is, it’s still a backpedal. They can say it’s so slight, it’s not that big a deal, but yet it is. Move back from it to understand that this thing is a problem Canada wide for industries. I think that with the number of provinces that are beginning to say this is going to be a challenge with our communities and pushing back, when they see the federal government even inching back a bit, it’s understanding that this is just maybe not what we should be doing.”

Hunter was noncommittal about how the UCP might approach environmental issues, suggesting the party is currently in the process of formulating its platform in the lead up to a 2019 provincial election.

“I don’t want to prematurely speak for what the party would do. We’re developing our platform right now. So we’re working on making sure that we can be some of the best environmental stewards while still balancing the opportunity to be able to get out there and work and provide for families, and allow businesses to develop. That’s always a balancing act that you have to find. We think that during the next election we’ll have the best solution to be able to accomplish that balancing act. But to tell you the details of where we’re going to go would be a little premature at this point because we haven’t developed the full platform yet.”

Currently, the federal carbon tax won’t come into effect until January 2019, and then only in provinces that have not introduced their own systems of carbon pricing.

While cautious in not revealing what a UCP government’s approach to environmental policy in the absence of a provincial carbon tax might look like, Hunter suggested that provincial opposition to a federal carbon tax will only continue to grow.

“I think it will, and I think the reason why is because we’ll start to see some economic impact studies being done, and we’ll start to see that there’s very little gain for this pain. So as you start to see that, you’ll say so I want to accomplish this, I want to accomplish that, but what’s my vehicle to get there? I think a much better approach — not to give you too many details — would be to incentivize innovation. Some of the best ways to be able to overcome our struggles — struggles we have in all aspects of life — is through innovation.”

While not currently official UCP policy, Hunter believes enhanced innovation will be the key to effectively approaching climate challenges.

“So I think that’s the approach we should probably take. That’s just Grant Hunter speaking, not the UCP. But this is my recommendation, that we work to help industries and individuals innovate their way out of the struggles and problems that they’re facing. And we are facing struggles. We’re facing struggles environmentally, we’re facing struggles economically — and I believe it’s innovation, and innovative Albertans, that will actually fix that.”

Although equally vague about how the federal Conservatives would approach environmental policy without the imposition of a carbon tax, Shields also signaled that an emphasis on innovation would be part of the solution.

“We have a policy conference coming up in Halifax, and lots of discussion will be about that. Canadians and industry are incredibly competent in finding different ways to reach different targets for doing different things. If you look at Alberta in the sense of the oil sands, at the incredible stuff that those companies have developed in making those businesses and operations more environmentally-friendly and productive, they’ve done significant investment in making that work. Some people say it was just the government that subsidized it, but it was a corporate effort. I think when you work cooperatively with industry, you’ll find solutions much easier than just being dictatorial with a hidden tax where the money isn’t directed to innovation. That’s the problem with the carbon tax, it’s not being directed to innovation.”

Provincial opposition to the federal initiative will only continue to grow larger, argues Shields, while asserting that a continued federal hardline over this issue could cost the Liberals dearly at the polls in an upcoming 2019 federal election.

“I believe so. They gave the Maritimes a year of extensions, and as that year extension is running out, Prince Edward Island was the first out of the four saying we can’t do this, and we’re not going to, and I think you’re going to see more of the Maritime provinces go that way. Quebec’s under cap and trade, which is the only cap and trade left now, and so I’m not sure what’s going to happen in Quebec. The premier of Manitoba’s said we’re at $25 and we’re not doing anymore,” said Shields. “This leaves it I believe back in the federal court, and I don’t think it’s a game-winner for them. If they are totally implementing it on their own, it think this will be a major challenge for them to survive.”