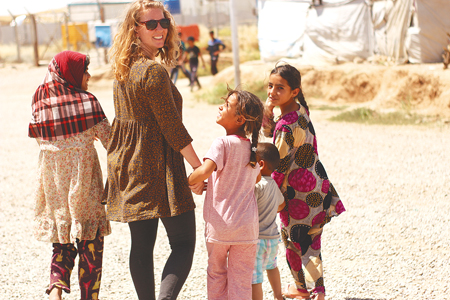 WAR ZONE: Former Taberite Kayla Stolk recently returned from a mission to a refugee camp in the Kurdistan region of Northern Iraq, which was only liberated from ISIS control in 2017. TIMES PHOTO SUBMITTED BY KALI WADE

Building bridges between our nation’s new citizens and established Canadian society is the key to understanding and acceptance, and it is this message that former Taberite Kayla Stolk is hoping to spread after visiting a refugee camp in war-torn Northern Iraq in early June.

Stolk, who grew up in Taber and whose family continues to farm in the area, was in Iraq from June 3-12 as part of a Burn 24-7 mission group that was assisting an NGO, the Light a Candle Project. Light a Candle Project is a Christian organization which serves and cares for those affected by war, and supports displaced people in Northern Iraq to help them regain hope and dignity.

“We were working with Light a Candle Project, which is an NGO on the ground, and they work with some of the U.N. refugee camps in the area, doing men’s and women’s programs, rehabilitation, and then also they have distributions,” said Stolk. “Right now they’re kind of small scale, but they’re ramping up as they get more well known, wanting to do bigger rebuilding projects.”

“We went to a camp that was west of Erbil, between Mosul and Erbil. Kind of the halfway point between the two cities. We were staying in Erbil, and then going out to the refugee camp. It was behind one of the previous front lines in the fight against ISIS. We saw bombed out villages, and a bridge on the way there that had been blown up by the Peshmerga, which are the Kurdish forces partnered with the Iraqi forces in fighting against ISIS. They had blown up one of the bridges to keep ISIS from coming across. It’s pretty crazy,” said Stolk.

Due to the last several years of war, there are now over three million internally-displaced people in Iraq. There are also hundreds of thousands more who have sought refuge from neighbouring countries. Many of these people live in camps, abandoned buildings, or low-income housing in Northern Iraq, the region where Light a Candle Project works.

Stolk has spent the past six years in Thailand, most recently working with released prisoners in a facility similar to a halfway house, and travelled directly from Bangkok to Iraq.

“We went into the camp four days that we were there and we did a children’s camp, because during that time it was Ramadan. So everything is kind of low-key during Ramadan, so they didn’t have any of their programs — their usual programs — because they were on a break for Ramadan. They asked us to do a children’s camp. There is a makeshift school in the camp.”

“Most of them came out of Mosul in the last year, post liberation. Maybe some a little bit previous. Mosul was liberated in July 2017. There’s tons of kids, and its funny because our first day there they said we’d have maybe 30 kids that will come to the program. We get there and there’s a 100 kids. And these are kids that have lived through war, they haven’t been to school for years because the infrastructure in Mosul has been obliterated.”

Their translator experienced a bit of a learning curve in how to effectively handle a group of rambunctious children.

“It was interesting — kind of organized chaos — they’re not super well disciplined children, but it was really fun. Of course we don’t speak Arabic, so we had a translator. The first day he was kind of quiet, didn’t know how to take control of children — so we’d be really excited, trying to engage the kids, and he didn’t really have the voice to scream over them. But it was cool to see over the few days how he got more into it. So we would do games, and songs, and lessons and moral teachings for the kids. Just kind of giving them something, spreading a little joy in the midst of this wasteland, which is kind of what it feels like.”

Conditions in the camp are primitive, but the necessities of life — like clean water and food — are being provided to the inhabitants.

“They’re living in tents — if you think of the stereotypical U.N. camp. I guess the water situation is pretty good, every tent or two has their water supply right there, and they have regular distribution from the United Nations. But it’s just a tent. They might throw a carpet out in the middle of their tent, and they’re all living there together. We were doing some tent visits with some of the families, walking through and getting to know some of their stories.”

One particular experience stood out in Stolk’s mind, and contributed to her rising motivation to help others see different people not as faceless enemies, but as individuals not unlike ourselves in many fundamental ways.

“We came up to this one tent, what drew us to it was there was these huge sunflowers growing between the tents — right now Kurdistan is dry, dirt, white sand, and then a sea of white tents — but we were walking and all the sudden there was these beautiful sunflowers, and so it just kind of drew out attention. So we started talking to the guy who was there, and he invited us to come and look, and have some tea — they were fasting, they’re Muslim so they’re not drinking or eating during Ramadan — but we had a sit down and visited with this family, the matriarch of the family, the grandmother and her sons and all their children and family. One of the sons was telling us he had a farm along the Tigris River in Mosul, lush and beautiful, and now nothing. There’s nothing to go back to, they don’t have what it takes to rebuild. They’re living off rations from the U.N. They have no money. He tries to find work, but that whole area is just inundated with displaced people, so you’re competing with thousands of other men for whatever little work there is. I was just very impressed with their hospitality. These people have nothing, and they’re sitting there inviting us to drink tea.”

Stolk struggled with whether she wanted to tell the story of her experiences to the wider public in Canada, but ultimately decided that silence is rarely an effective agent for change.

“I just felt like I want people to understand that these people aren’t our enemies. I have the opportunity to use my voice for good, and right now there’s just such a stigma with Muslims, with refugees. When you’re there and you’re seeing the victims of war, they’re not our enemies. They didn’t choose to be born in Iraq, they didn’t choose to be born in Mosul. Some of these kids were playing — and kids are so resilient, they’re having fun and laughing and smiling — but then you think wow, what did these children see? They lived three years under ISIS, and then in the last year the Iraqi forces and the Peshmerga were trying to take Mosul back, constant bombing, explosions, gunfire.”

Not surprisingly, she expected to encounter a degree of resentment among some refugees toward her American friends, but was surprised in reverse when she discovered this attitude to be almost wholly absent among the people she visited.

“The city is just destroyed, by American bombs. Some people in my group were American, but they still welcomed us. Because that is a dynamic — your bombs, from your country, from my American friends — destroyed my nation and my home. But there’s not a feeling of that at all. They were so welcoming, and I think what I realized is that they just feel forgotten. Even us just sitting there and sharing some tea with them, I think you can’t discount the power of presence, of being there and hearing their stories, and just listening — for them to know that they’re not forgotten.”

The level of hatred toward various religious and ethnic groups that Stolk witnesses on social media and elsewhere when she returns to Canada is incredibly discouraging, but also a call to action to help others understand that we can draw strength from our differences instead of hating or fearing what we don’t know.

“It’s just really hard when I come back and I see people posting on Facebook, ‘Keep the Muslims out!’ or ‘ the Muslims are doing this’, or ‘they’re teaching their children to step on our flag!’ It’s just really hard, because in my life I’ve lived in the States in Minneapolis, I’ve worked with Somali Muslims. I live in Thailand, so I know Thai Muslims and have worked with Thai Buddhists. I don’t think they’re our enemies, I think we need to not lose our compassion, not lose our humanity, and not demonize these people. It doesn’t mean you have to agree with them, or have the same philosophy on everything, but I think that’s the thing that’s lacking in today’s world is more people actually listening to each other — not listening to give a rebuttal — but just listening to understand.”

Stolk is currently considering relocating to the Middle East for humanitarian-related work, potentially Iraq, Jordan, or even working with NGOs on the ground in war-devastated Syria — a possibility she hasn’t yet imparted to her family. Reflecting on her experiences in Iraq, she understands more fully that despite all the differences that make us unique, all people’s fundamental humanity is the fulcrum that can be used to reach acceptance, and perhaps eventually, mutual respect and admiration.

“I think it gave me a better understanding of a very complicated crisis, being there on the ground and seeing what these people are going through. And to identify with a little bit — the tiniest piece — of their suffering. In some ways you kind of want to be overwhelmed with hopelessness. It reminded me that we need to have compassion and show mercy, and continue to open up our arms to these people. Not even opening up our nation to receive refugees, but once they’re here, to build bridges with them. I just think we often hate what we don’t know. So if we feel this tension in our hearts towards Muslim individuals, towards refugees, I think the way to overcome that is to get to know a Muslim, or to get to know a refugee. Because we can’t hate what we know, if they have a face and a story, they become an individual, and it gets harder to hate them. So I think we need to build bridges rather than making assumptions.”