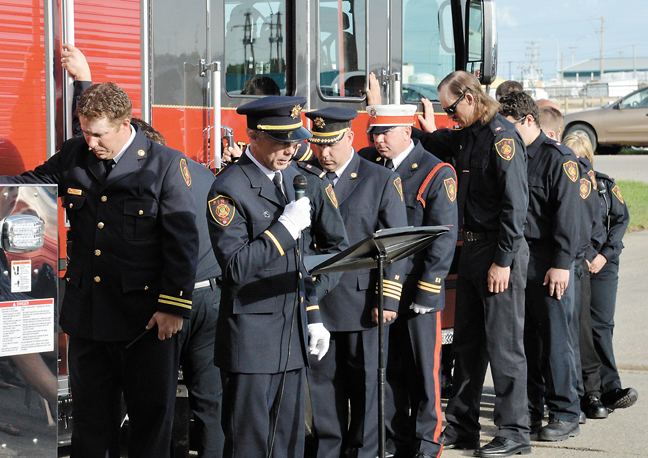 “It is a privilege to speak before you here tonight. This project has been two years in the making. We are 111 years of service to this date. This is an incredible feat for this to work out all the way around,” said Andrew Prokop, Mayor of the Town of Taber. “We have gone from what was a 24-foot ladder truck capability, to a 110-foot with what you see before us which is nothing short of incredible. Thanks for all the past members’ service and the current members service as well. Ultimate safety to all for all calls going forward.”

The ceremony celebrated the history of the Taber Fire Department which has been around since July 1907.

In those early days, two chemical tanks were purchased with a tank put on both the north and south sides of town. The tanks were pushed by manpower.

“It didn’t take long for it to move through the building, and it didn’t take long for it to go through those two chemical tanks and all the water supply they had in this community,” said Steve Munshaw, chief for the Taber Fire Department in recounting those early days of fire service in town, adding a call had to be made to Lethbridge for extra help. “The dedication and work all the firefighters placed served well and it saved the rest of the community as the fire would have taken out the main street of the town.”

The huge fire prompted town council in 1910 to build a water system to supply water within the downtown core.

In 1912, a fire wagon and horses were added to the fire department. One of the earliest fire chiefs in Taber’s history, Robert (Cappy) Faulds, also served as police chief and town superintendent. In 1918, the horses were put out to pasture and replaced with a Dodge truck to power the department.

In the early days, most of the heating and cooking was done by coal or wood stoves, resulting in a large number of chimney fires.

“The only equipment that was needed at the time was a large ladder and a bag full of salt. To deal with any of the grass fires, all they needed was a water barrel attached to a truck and a burlap sack to go out and fight the fires,” said Munshaw.

In 1920, Cappy and his volunteers staged the very first Fireman’s Ball. Money raised purchased boots, coats and Christmas hampers for the needy. In 1938, while in the line of duty, Robert (Cappy) Faulds was carrying oxygen bottles upstairs to a doctor’s office, and suffered a massive heart attack. Two days later, he passed away, marking Taber’s first line-of-duty death with the fire department.

“In Cappy’s years, there were over 198 fire calls that his personnel was put to service,” said Munshaw.

The fire bell was replaced with a siren to announce further to get firefighters to fires faster. In 1940, the first official fire truck was put into play for Taber.

“From 111 years, we have been brought up from a horse-drawn chemical tank to this beautiful apparatus put before us,” said Munshaw.

Part of the unveiling was a bell ceremony put on by the honour guard, where 36 names were dedicated to the bell of who have passed away and gave 10 or more years of service in Taber.

The bell was rang three times, times three to signify they have come home and their last call is finished. Family members were on hand at the ceremony for the dedication.

“This will mark the first bell into Taber since 1940. The significance of the bell was to let firefighters know the fire was in town and whereabouts to go,” said Munshaw.

“The many men and women of today’s fire service are confronted with a more dangerous work environment than ever before. We are forced to continually change our strategies and tactics in accomplishing the same task. Our methods may change, but our goals remain the same as they were in the past. To save lives, protect property and sometimes contribute a terrible cost. In the past, as firefighters began their tour of duty, it was the bell that signaled the beginning of the day shift and throughout the day and night, its alarm sounded. When the bell summoned these brave souls to fight fires and place their lives in jeopardy for the good of their fellow citizens. When the fire was out, the alarm came to end and it was the bell that signaled to all the completion of their call.”

Taber Fire Department’s chaplain Clarence Bos recited the prayer of A.W. ‘Smokey’ Linn, who wrote the prayer in 1958 after witnessing the death of three young children in a house fire, and wrote the poem in helping deal with the grief.

‘When I’m called to duty, God
Where ever flames may rage
Give me the strength to save a life,
Whatever be its age.
Help me to embrace a child
Before it is too late,
Or save an older person
From the horror of that fate.
Enable me to be alert
And hear the weakest shout,
And quickly and efficiently,
To put the fire out.
I want to fill my calling and
To give the best in me,
To guard my every neighbour and,
Protect his property.
And if according to your will
That I should lose my life,
Please bless with your protecting hand
My children and my wife’

Bos would also bless the fire department and the resources it uses.

The event ended with a hauling ceremony where members of the Taber Fire Department helped push the ladder truck back into the fire hall to start its service career.

Back in late September 2017, town council voted unanimously to award the purchase of the platform fire truck to Commercial Truck Equipment Co. with the amount not to exceed $1,199,147.47, exclusive of GST; and supported transferring an additional $300,000 from capital reserves to offset the already budgeted $900,000 for the item.