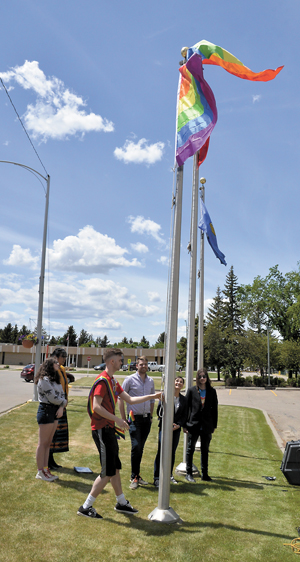 In a day filled with both politics and love and acceptance, Taber Equality Alliance held its second annual Pride Fest on Saturday at the Provincial Building and Confederation Park.

Coming off the heels of last year’s celebration that saw the Pride Flag vandalized and burned, and town council voting in January not to allow the flag to be flown again this year at the park, opening ceremonies were moved to the Provincial Building, where the NDP government granted permission to fly the flag in front of their building.

“I have been asked over the past week of why raising the Pride Flag is so important. The most obvious answer is to raise awareness and to start conversation and respectful dialogue. I thought back to the words I expressed last year over the burning of our Pride Flag. It helped illustrate why this is so important with all these emotions,” said Jayce Wilson, representative for the Taber Equality Alliance and MC for opening ceremonies for Taber Pride on Saturday. “The Pride Flag is not just a symbol, but was built by the blood of those who have struggled before us. It represents us to those who have lost their lives to those who hate and those who have taken their own lives out of despair. The flag represents those who fought so hard to have Bill C-16 and Bill 24 passed. By burning that flag, it is an attempt to bar our efforts and suspend our progress. Hold in your heart what the Pride Flag means to you. We are here to celebrate but also join in solidarity and raise awareness to look forward to a future where everyone, no matter their race, religion, sexuality or gender identity are all equal and loved.”

Greta Old Shoes from the Blood Reserve gave a blessing and prayer to the event on behalf of her elders, stressing the love of the Indigenous people which aligns with the Pride movement.

“In this part of the land, we have to understand that we are one. There is no more of this ‘I’m first.’ There are people who have lost their lives over what some think is not right. In the culture of the Blackfeet, we do not shun anybody. Every child in our home is a blessing to us,” said Old Shoes, who would eventually translate her prayer into English from her native tongue. “We ask that you bless us today and we raise this flag for the two-spirited. We ask that you bless each and every one of us that have come here today. We ask that as we venture off into the world that we will always be safe with wherever you put us. We ask that you bless the two-spirited people that they will never give up and that they live to be shining stars of our Creator. I pray for the people of Taber and those who are celebrating this beautiful day of Pride. Thankful for what they have and be proud of who they are. Because they are gifts from our Creator and we should protect our gifts.”

Special guest Shannon Phillips, minister of Parks and Environment was on hand to give words of encouragement. Upon hearing of Taber town council voting down the option of flying the Pride Flag at Confederation Park in June, the provincial government quickly stepped in, allowing the Pride Flag at the Provincial Building which is right across the street from Confederation Park.

“Every Albertan deserves to feel safe in their community. That safety and that dignity and that human right of what the actual choice is before us to honour Pride month,” said Phillips. “There are those who think we should not protect kids in schools with GSA clubs. There are those who think it was a bad idea for us to bring transgender equality into our human rights legislation. The world had moved on, Albertans have moved on. Anyone who wants to get in the way of that will have to have conversations with Albertans in all four corners of this province, not just the big cities, but in every small town.”

As with last year, Calgary-Hawkwood MLA Michael Connolly attended the Taber Pride event. Upon election, he became one of the first three openly LGBTQ people elected to the Alberta legislature, alongside caucus colleagues Ricardo Miranda and Estefania Cortes-Vargas.

“Three hundred people last year were in that field over there (Confederation Park) to celebrate Pride in Taber. Ten years ago, if anyone would have told me there were 300 people who would celebrate Pride in Taber, they would have been laughed out of the room. I am so proud that this town is able to do that,” said Connolly. “When the Pride Flag was flown first in San Francisco, people had no idea what it was. But when they turned the corner and saw people marching in United Nations Square, they saw the rainbow flag, they knew it represented them. They knew the flag represented every colour of the rainbow. That is why we are here today, to celebrate all of us. To let people know we are here and we are proud of who we are. People can tear down this flag, people can burn this flag, but they need to know that we shall now be moved.”

In January, town council voted against the Equality Alliance using the Confederation Park flagpole again and went a step further by voting to remove the flagpole’s designation as a community flagpole, preventing future requests from anyone to fly any flag other than the official national, provincial or town flags.

Taber town councilor Carly Firth was the lone vote in favour of allowing the Taber Equality Alliance to fly its Pride Flag at Confederation Park for its celebrations, and was on hand to witness Saturday’s opening ceremonies.

“I am so happy that this event is going so well. I am really grateful for Ms. Phillips and Mr. Connolly coming down. Their presence raises the awareness for the event at a provincial level which is amazing for our little town,” said Firth. “The theme of small town, big heart, I couldn’t have put it better. There is still a lot of work to be done and that is why these events are so important and why we are so grateful to the Taber Equality Alliance for organizing this.”

Along with the flag raising at the Provincial Building along with guest speakers, the event featured hours of entertainment at Confederation Park, face painting, bouncy castles, fire truck tours, food trucks, a beer gardens and pub gathering at Tank 77.