Nish hopes her story will help other gay youth 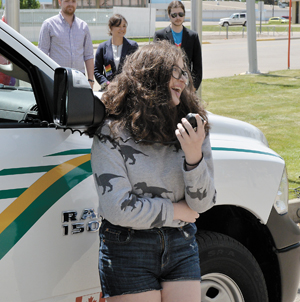 TESTIMONIAL: Although there were technical difficulties at the beginning of Taber Pride opening ceremonies, the Taber Police Service stepped in to help lend a voice to GSA member Zoe Nish who recounted her story in her trials and tribulations of being a lesbian and growing up in small-town, rural Alberta. TIMES PHOTO BY GREG PRICE

A teenager going to school at W.R. Myers, Zoe Nish is the leader of the only GSA (Gay Straight Alliance) in Horizon School Division.

“I’m a big old lesbian,” said a nervous Nish to a chuckling and applauding crowd, during Pride celebration speeches in front of the Provincial Building in Taber on Saturday afternoon. “Growing up in Taber, I knew I was a lot of things. I knew a lot about my sexuality, religion and growing up in small towns as a whole. As I stand here, knowing how far this town has come, I have been helped by every single person standing here with their strength.”

Nish grew up Mormon and was outed when she was in fifth grade with someone who she thought was a friend.

“That put me through a lot of things, but it made me into the person I am today. It changed me, but it didn’t break me,” said Nish of the negative reactions she received from many in town.

Going through those confusing feelings at the time, Nish said she retreated back into the closet, trying to pretend to be something she was not in terms of her sexuality. Buying the narrative at times perhaps it was a ‘phase’, where bisexuality would have been more accepted.

“During school, I met a lot of friends that I am still friends with today that showed me more perspectives than I ever thought were possible. I allowed myself to explore my sexuality and let go of the trauma I experienced before. I decided I’d come out as bisexual,” said Nish.

“I finally got to high school and I realized I was lesbian and with that came a lot of things. Just the word itself had a lot of stigma attached to it. I was finally comfortable identifying myself as lesbian. It’s a prideful word.”

Nish recounted a story of watching a television program with her mother entitled ‘Everything Sucks.’ A backdrop of a high school in the 1990s, it is a group of outcasts trying to navigate teenage life without the use of smartphones and 21st century technology.

“There was one girl who stood out to me, and I realized very quickly why. She was a questioning lesbian and she represented so much of me,” said Nish. “I found myself sobbing because I didn’t grow up with representation and when you see kids like yourself just starting to get representation, it’s such a bundle of emotions. You realize what you missed out on, but you are so happy because you see kids like yourself and you don’t feel so alone.”

Nish hopes she can serve as a role model to not be afraid of who you are, along with seeing the people who attended Saturday’s Pride event as a strong foundation and base of support for people for which the Pride movement represents.

“It’s not a bad thing to be who you are and it never will be,” said Nish to the applauding crowd, getting swept up in the emotion with tears. “Thank you so much for being here today and listening to me. You give the kids hope and when you love them and show that you love them, it is so important. I hope that my legacy and all your legacies pay tribute to all kids and their challenges in their childhoods. They will see that there are people that love them and that they should love themselves just as much. Love your children and who they are. Support them, who ever they are and those around them.”