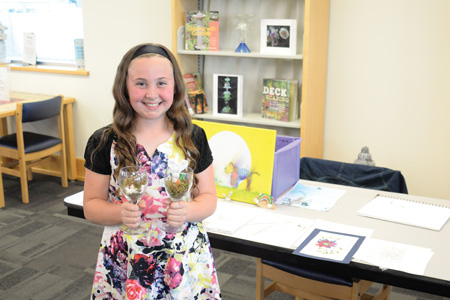 ARTIST: Alaxis shows off one of her art pieces at the student art show held at the Taber Public Library last week. TIMES PHOTO BY COLE PARKINSON

While Taber may not be looked at as a central figure in the art scene, there is still tons of talented artists living in the town.

That talent was on display on May 10 at the Taber Public Library as three young art students, Alaxis, Bella and Macie, had their art displayed for the public to not only view but also to purchase.

The three students are under instruction from a local teacher who is hoping to shape them into artists who are able to not only create art but also be comfortable in public sharing their creations.

“Those were my art students, three of them and they are exceptional artists. I’m teaching how to market their stuff, to go out in public, how to address the public and on top of that, learning how to create art. I’m a multimedia art teacher so they are into oils, into chalks, into acrylics and everything like that. Once or twice a year I like to have them display their art and give them encouragement,” said art teacher Katharine Hockney.

The May 10 show was the first time for the three to show their art and interact with the public.

Despite it being their first shot, the three had big success and by the end of the event they had some cash in hand from selling some of their art pieces.

“They all walked away with at least $30 in their pocket. The response was wonderful, I just can’t believe it. I thought if 10 people came that would be wonderful but they actually were swarming. At one time, I would probably say, there was 20 people there and that’s lot for that area,” added Hockney.

All three of her students are still relatively young and with their first art show, Hockney wasn’t expecting them to be experts in the marketing and sales department. Even though they showed their ages at times at the event, she was still impressed with how everything went.

“They took it all in stride. Alaxis, she has a little bit more demeanor than the rest. They were giggling and having fun, which I expect from nine and 10 year old’s but she took it very seriously. She stayed behind her section of the table and sold her things, greeted people and I told her how proud of her I was,” said Hockney. “They weren’t nervous and they were giggling the whole time, which I consider a successful show.”

Since taking them on as students, the three have shown great strides in their artistic abilities.

As an after school program, Hockney tries to bring the best out of her students by allowing them to create art without any pressure.

“I see them once a week in an after school program on Friday. Along with teaching them art, they are learning marketing and they are learning to social together. Not everyone has the same ideas but my basic thing is through my hands, my heart speaks and that’s my mission statement. I try to instill in them that art is never wrong. It’s the interpretation of how your heart is singing at the time you are painting, so it can never be wrong. When they know that, it releases the pressure off that you can’t be marked wrong because it’s from you.”

With the first show under their belts, the students will continue to attend classes and work on all of the skills associated with becoming an artist.

In regard to future events, Hockney will be asking them to tag along as some future farmer’s markets.

“I’m going to try to get into farmer’s markets on Thursday nights and I will do the first few like that. Every so often I will take one of the students with me to learn the ways, one on one,” she said.

While only three students are currently enrolled, she is always on the lookout for more.

Not only is she looking for younger proteges, she also has openings available for adults looking to get in the art game.

“I’m always looking for new students and I do accept adult students too. There’s no age limit or requirements.”